Vox Populi, Vox Dei! The voice of the people must be heard and no better way to do this than a DAO! The Index decentralized autonomous organization needs the involvment of Index Owls to take part in proposals and vote for the development of the organization. I am an #IndexOwl and I like being involved in the development of the project I like! This is why I don't miss a chance to vote into the Index snapshots. I know my votes are like a drop in the ocean but voting makes me feel like I am part of something bigger! AAVE-20 proposal quickly voted "for" as the AAVE part of the DPI is one of the most successful shares of the token. This was a follow up of AAVE-18 and [AAVE-17] 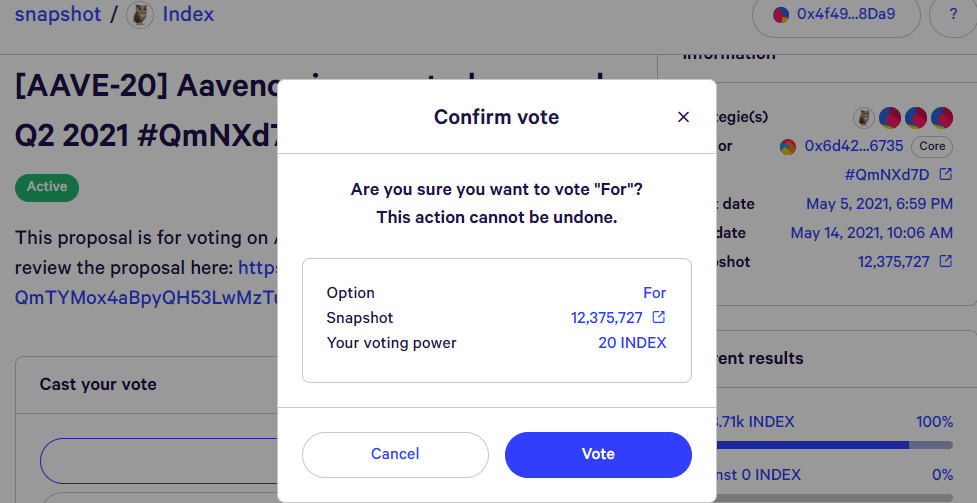 The AAVE-18 was the second meta-governance proposal which went live few days ago, and was a vote for the funding of the Aave Grants. All $INDEX holders could vote with the nearly $32,000,000 $AAVE locked in DeFi Pulse. I was just in time to vote for the [AAVE-18] Aave Grants DAO, and because AAVE and INDEX are making a good mix, may vote was in favor of the proposal. The AAVE-17 was a snapshot was a vote about the whitelisting of Curve Liquidity mining, which sounds like a good idea.

When voting the AAVE proposal I noticed that more proposals were still active. Took the opportunity to vote the IIP-38 Update Snapshot Strategy and the  IIP-37 BTC2x-FLI Parameter Update.

The IIP-38 Update Snapshot Strategy included LP positions, unclaimed index and delegated votes, aiming to include index held within Sushiswap LP positions, Sushiswap LP positions staked in Onsen, and unclaimed index in the MVI farm. The snapshot was required to ensure that stakeholders will receive the chance for a fair vote, reason why the updated strategy must include the  the index within Sushiswap LPs and the MVI farm. The vote delegation would improve the voting process and number of votes for each snapshot, as the lack of participation will be replaced by vote delegation. From all the snapshots I voted this week, the IIP-37 BTC2x-FLI Parameter Update looked the most important. This vote was required to update the BTC2x-FLI parameters to lower the risk. The market volatility required strict parameters to protect the BTC2x-FLI from liquidation. The new parameters will help BTC2x-FLI to recenter towards the 2x target leverage faster. Both ETH2x-FLI and BTC2x-FLI must be perfectly balanced ... as all things should be! The Index token keeps flying high, as the #IndexOwl reached a new ATH on the 9th of May. The new top value was set at $67.08 but my prediction is that this ATH will be history in June.

The flagship product, DeFi Pulse shows strength and reached a new All-Time High on the 12th of May, at $656.49 USD. After the ATH, DeFi Pulse (DPI) showed stability and maintained a value close to $600.  It  is a huge achievement as the overall market trend was a general depreciation of the market with approximately 20%.

According to CoinGecko. the Flexible Leverage Token (FLI) had the ATH on the 16th of March, at 751.65. Not sure if this is just the launch value or if this value was tradeable but less than 10 days later it reached the All-time Low, at 70.40 USD. From the bottom value reached on the 24th of March, FLI kept growing and growing, reaching a value of  this week