Cub Finance went live on the 9th of March as the fresh DeFi yield farming platform of the future, with smart contracts and base layer application adapted on Binance Smart Chain.

The Cub Kingdoms were announced in April, as auto-compounding vaults with smart contracts and top rewards. The Cake Kingdom went live on the  28th of May, with a full CertiK audit. I moved all my $CAKE stash into the Kingdom and is still farming today! The reward for one month of providing CAKE to the kingdom summed up to 21 $CAKE and $85 CUB tokens.

The CUB Kingdom was lunched on the 28th of May, as a auto-compounding vault with single asset CUB that shares the multiplier with the CUB Den. The main difference was in the auto-compound CUB added to the staked assets and the BNB dividends from management fees on the other kingdoms. 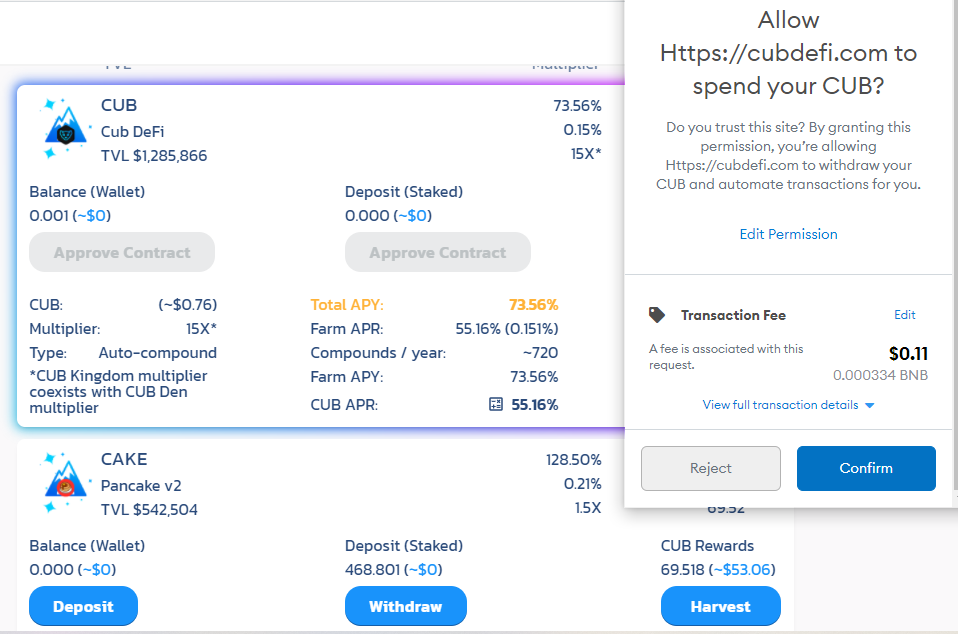 I unstaked 604 $CUB from the Cub Dean and got them ready to be staked in the single asset CUB Kingdom, taking advantage of the bullish APY and top DeFi features. All the $CUB staked in the Kingdom contract is pulled in the Cub Den, where it earns 15X multiplier. The contract will compound the cub at a higher APY, and will also allocate Binance Coin (BNB) dividends to the Cub Kingdom.  Because the contract are cross-composable, the Cub Kingdom can take earnings from an external source and compound it into the base asset.

The other 4 Kingdoms (BNB-BUSD, CAKE, DOT-BNB, ETH-BNB) and every new vault will earn "off-platform rewards". A percentage from the management fees are being distributed to CUB Kingdom Stakeholders while another percentage buys and burns CUB. The Cub Kingdom has a set 7% management fee on off-platform rewards, such as CAKE harvests. Then the 3% fee for CUB Staking Kingdom will autonomously convert from the base asset into BNB and distribute 2x daily to the CUB Kingdom.

I added the 84 CUB tokens farmed from the CAKE pool to the 304 unstaked from the Cub Den and added all to the Cub Kingdoms. Now I have 689 CUB in the same place and no need to worry about the rewards, as everything will be auto-compounded in the pool. 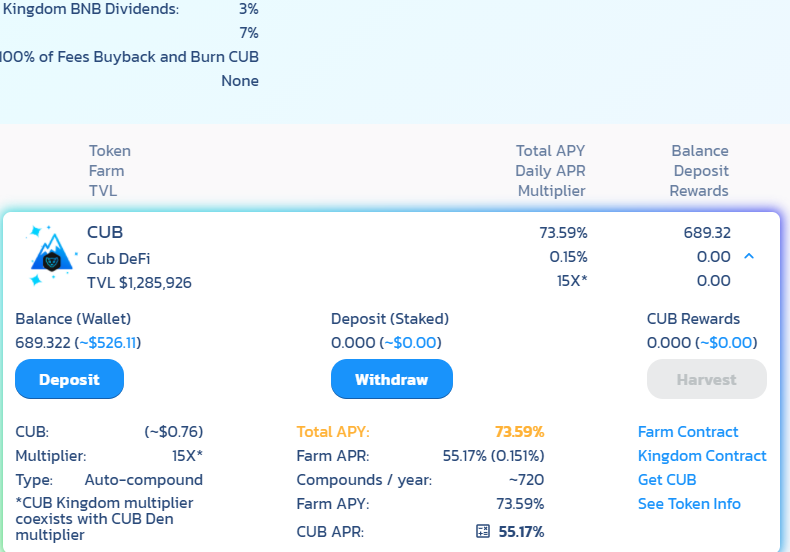 Another month gone for the CAKE Kingdom, and another batch of CUB was farmed. This Kingdom is pumping hard, farming 83 $CUB tokens and nearly 19 $CAKE in June. Surprisingly, the total APY dropped only by 14%, from 128% to 114%!

Cub Finance will be updated with a new fee structure that will include the BNB distributions to the CUB Kingdom and pool migration. The multipliers will be doubled and the LeoFi Leasing App will be launched in the second part of 2021.

The major event will be the Polygon extension, with a new polygon platform, pLEO token and an airdrop to CUB stakeholders from the new Polygon platform.