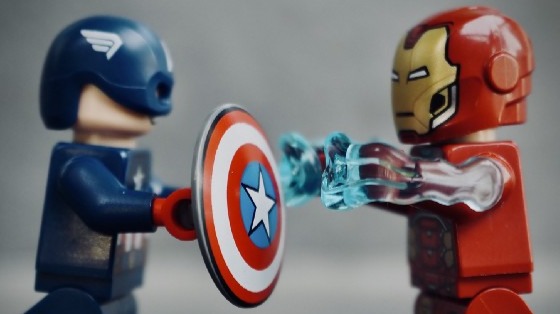 Soon there will be a civil war in the crypto universe. And once again reality will surpass fiction! There will be at least two opposing camps, the pro-crypto and the anti-crypto and possibly the neutrals (unbelievably this time Switzerland is not impartial). It will happen sooner rather than later because ‘it’s human warlike nature’, only now in a new realm 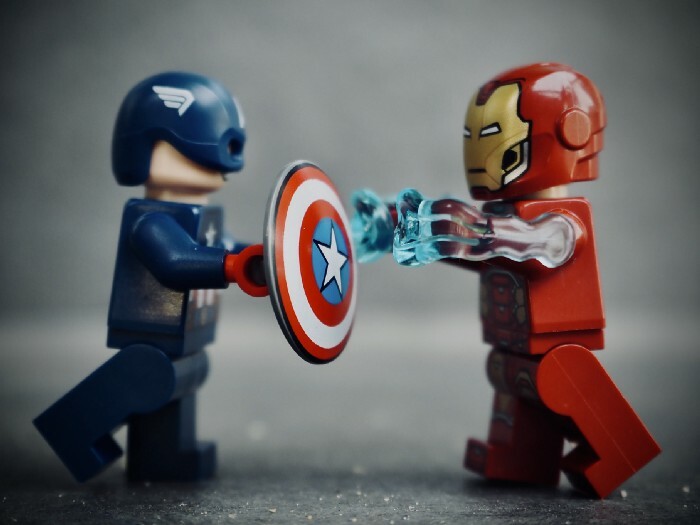 Captain America: Civil War is the mirror in fiction that explains what is to come.

In the 2016 film on one side are the pro-regulation, in favor of the States idea to control the superhero team. That faction is led by Tony Stark (what an irony, the most troublesome with authority takes the steadiest role in giving in to government reason). On the other side are the anti-regulation led by Steve Rogers, Captain America, who distrust (not without reason) the true intentions of the States and believe that his judgment is better.

In the MARVEL blockbuster, the division is produced by the lack of unanimity in the question of supervising The Avengers or not. The Sokovia agreements defined a series of conditions to control the uncontrollable. That signed paper was a crack between superheroes. Going back to the metaphor, it seems that there is less and less time before States reach a global agreement to ‘control the uncontrollable’.

Soon in some city whose name we cannot anticipate, the States will sign something that will have a name in the style of ‘Crypto Registration Act’ that will seek to intervene in this technology that frightens the rulers of the day. Why does it generate fear? Due to ignorance, envy and arrogance. This last point is central. Technology cannot be given absolute freedom because it could break with dozens of centuries-old institutions that never reconsider its usefulness, but only care about its continuity.

The comfort of bureaucratic inbreeding need not be questioned. If that happened, it would have its Endgame. Each new and incipient technological development challenges entrenched paradigms that do not want to be rethought. Faced with this, the bureaucracies put their paperwork machines running at full speed to avoid catastrophe by waging a furious battle against change.

Of what use will parliamentarians around the world be with the ability to vote directly via blockchain? Of what use will career officials of multilateral organizations be if authority is blurred and no longer descends from the hierarchies? What will the powerful bankers do if the pan of money device is taken from their hands? What will the big technology companies sell if the millions of submissive sheep leave the fold for other pastures? Will the new crypto billionaires be able to continue accumulating huge capital if they face the powers that be?

We have no certainties or answers to these questions. What we do know will happen from the technical analysis of human history is that there will be a war and the sides of the crypto universe will be defined. Who will be left on each side? As a mental exercise, we present the possible teams on each side of the line that will be drawn on the ground, but time will tell how the board will be set:

The non-aligned (it is not yet known which side they will fall on): Vitalik Buterin (‘Ethereum is neutral, but I am not’) Really???; Michael J. Saylor; Catherine D. Wood and Coinbase. 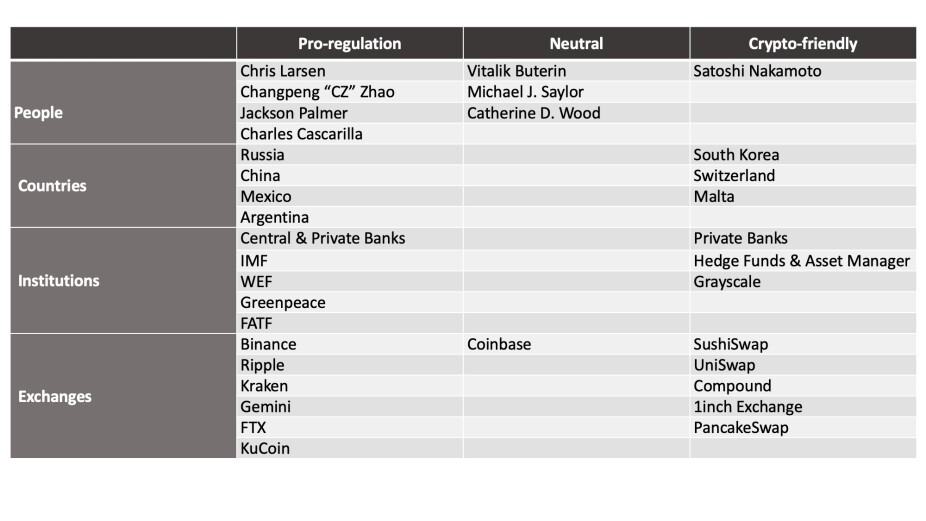 “France is very uniquely positioned to be the leader of this industry in Europe. Is a very pro-business, pro-crypto regulations. The government’s attitude towards this industry has been phenomenal.” Changpeng “CZ” Zhao (CEO, Binance)

“To realize the unlimited potential of the virtual asset market, we must overhaul regulations that are far from reality and unreasonable” Yoon Suk-Yeol (Elected President, South Korea)

“It would benefit all of us in the ecosystem to have agreed-upon definitions.” Alesia Haas (Coinbase CFO)

“After years of studying it, I believe that cryptocurrency is an inherently right-wing, hyper-capitalistic technology built primarily to amplify the wealth of its proponents through a combination of tax avoidance, diminished regulatory oversight, and artificially enforced scarcity” Jackson Palmer (Co-founder DOGE Coin)

Which side are you on my friend?

Illustration by NextAdvisor Cryptocurrency regulation can be a controversial topic, but plenty of experts say crypto…

As cryptocurrencies spread across the globe, so too do the regulations put in place to govern them. The crypto…

PARIS - The crypto world may have turned a corner when it comes to regulation. The bosses of several major crypto…

In a head-turning Twitter thread yesterday, Dogecoin co-creator Jackson Palmer reiterated he has no interest in…

Chef Nomi is the creator of SushiSwap which achieved great success in a short time. Chef Nomi sold his SUSHI tokens and…

Institutional adoption of bitcoin is here, you just have to know where to look. While cryptocurrency advocates have…

With each global crisis taking place, the weaknesses of our globalized financial systems' underpinning mechanisms…