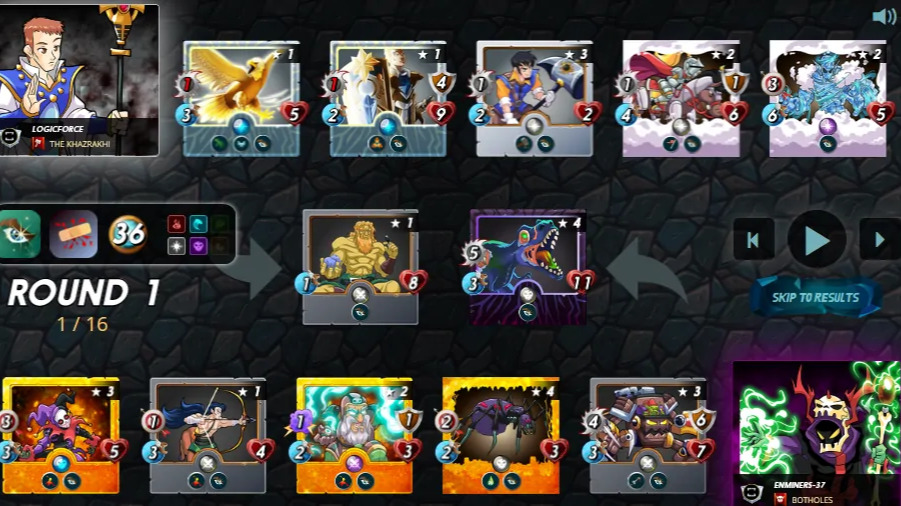 I do not own the Peaceful Giant but do have it in my spell book hence I can still use it in a match. The battle to follow is one where I have Peaceful Giant as my main tanker.

I started out with Peaceful Giant followed by Eagle, Sheildbearer, Armorsmith, Silvershield Knight, and Wind Elemental. While my opponent went with death splinter and led off with Rex, Goblin Mech, Spider, Wizard, Centaur, Jester. By the end of the first round I was in the lead as I was able to knock out their spider and dwarf while my formation stayed intact. By end of round two I still had my entire formation while my opponent was down to Rex and Goblin Mech. My Peaceful Giant and Shieldbearer were handling all the attacks well. The match literally flipped as most of my formation is knocked out. My Peaceful Giant and Shieldbearer were really holding by a thread and it showed as Rex and Goblin Mech knocked them out with ease. It would be my combo of Eagle, Knight and Wind Elemental that would take out Goblin Mech and then Rex to take the win!

I found the match exciting to watch as it was really a tug of war between us and if it was not for the rule set opportunity I probably would have lost. Rex and Goblin Mech high health stats prove to be a challenge to break but since opportunity allows me to attack lower health monsters first my team got to get kills first due to their advantage in speed. I guess if my opponent had a monster that slowed my team down it may have turn the tide in their favor. Who knows. What matters is that I got the win ever so slightly.

Link to the match if you want to watch.