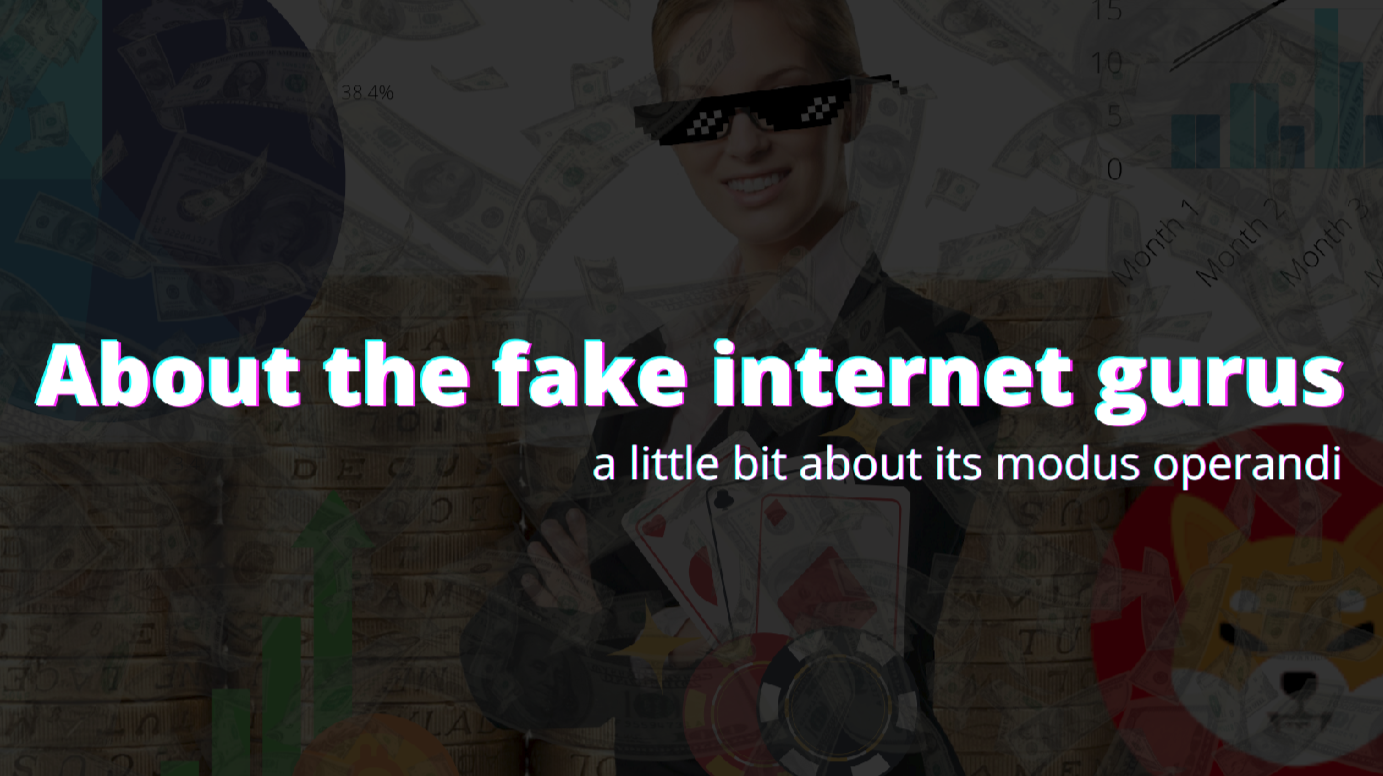 Lately I've seen an epidemic of fake gurus out there selling miracle formulas to make 400% a year investing in binary options and selling vacuum-packed fitness cake. After analyzing the snake oil advertisements they send to my mom on Facebook, I decided that it would be interesting to describe a little about the modus operandi of these hacks. Well, let's go.

I already advance that picking one or another specific characteristic of an influencer that fits in some characteristic below does not necessarily make him a pick. However, analyzing the context, it is possible to identify characteristics that are common in most of these cheaters.

Let's start with the main feature: easy money. Cheaters love to offer easy money, and the reason is that ambition and fear, which are two of the biggest drivers of human will, can be awakened using the easy money proposal, unlike vocational or language courses, where it is really necessary. carefully analyze and allocate a significant amount of time and effort to get results.

In their advertisements, these gurus boast luxury cars, expensive cell phones, 400% results in binary operations in just 20 seconds and tripling money in internet gambling. Selling the impression that anyone is capable of easily getting the future of the market right and that it is possible to make absurd profits with a very low risk in virtual casinos (and you didn't read it wrong, I've seen many guys doing this), the guy conveys an almost mystical aura, showing how smart he is, and saying that he will “transmit this billionaire knowledge” to you for “a symbolic value”.

After an influencer consolidates himself as a “crypto guru” or “Bitcoin baron”, his authority is confirmed by people who trust him, and people come to trust him because he has the authority confirmed by other people who also trust him. This becomes a vicious cycle where more people come to trust him just because there are already people trusting him. Many professional hacks call this the mage's cape, because after a mage shows up with his cape and trinkets, people come to believe a lot more in his authority than they would in an ordinary situation with him speaking his sincere opinion on the matter. This is a trick widely used on TV, where supposed mediums and fortune tellers wear a whole sorcerer's outfit, stimulating the popular imagination and causing the impression that the individual has more power than he really has.

The picture becomes even more serious in the case of money: you sell a course to get rich, and you get rich with the profits from that course, which gives you even more authority to say that you know what it takes to get rich, which makes more people give you money, making you even richer.

It is important to make it clear that there are indeed innate talents among these "gurus", but after the mage's cloak is formed, there is no way to be sure what is true and what is false.

A very interesting thing is that many of these gurus profit from the loss of others, and in different ways, the best known being binary trading, multilevel marketing and paid advice.

In binary options there is a mobile application (which I won't reveal the name so I don't get a lawsuit for moral damages, but you probably know which one I'm talking about) that gives a percentage of the loss of people who entered through your link affiliate. Exactly: you call people into the application, they have a loss and you will earn a percentage of that loss. Many of these binary options “gurus” still manage to profit three times or more in the process, selling a platform trading course, using the affiliate link and with the YouTube video where they talk about how they made money with the platform. Is it or isn't it the height of hacking?

Multi-level marketing, or, as I like to call it, the “socially accepted pyramid scheme,” is a scheme where you own a product, get a few friends to sell it, and get paid a percentage of what your friends sell and what people sell. that your friends have referred have sold, so when the pyramid is about to collapse, you run off with the money and let your “affiliates” take the loss and stockpile of cheap Chinese goods. Just like in the previous scheme, you can profit more than once, selling a course on how to trade, selling the products for your affiliates to sell, selling shares in your company (and yes, you have big business with similar schemes), earning with adsense from website and YouTube and even earning by selling tools to increase sales, such as a “bot sales script” or advertising products for your products.

Paid counseling is an old practice, being widely used in hack churches, where you manipulate the subject so that he spends money in a wrong way, making you earn a portion in the process, apart from the money he would already pay you for. because of the advice he sold you. However, on the internet, this type of fraud reached another level, where the guy teaches you something in an extremely specific way, but in a way that you, at least initially, spend lots of money with him. An example is the sale of investment courses where the investment platform belongs to the instructor, or machine maintenance courses where the only manufacturers of the repaired machines belong to the instructor. While paid counseling is not in itself a scam, it is important to understand the concept and how they might try to harm you with it so that you are not made a fool of.

The light at the end of the tunnel

Sense of urgency, or the famous “this offer is only valid until Monday”, is one of the tools most used by these gurus to force you to buy their cram school, or their product. This process is divided into three parts, one where he exaggerates the qualities of his product, talking about how wonderful it is and has saved the careers and financial health of thousands of people, the second (the only optional among the three steps) where it is presented a 90% discount on the product, emphasizing how big this discount is, and a third stage where a deadline is stipulated, and where, after that date, the product will no longer be available.

Of course, not every time this happens it's because of some hacking. There are cases, such as courses with correction of activities and resolution of student doubts, where having a very large number of students can make correction impossible, but it is important to pay attention to these details.

I'm not saying that all the so-called gurus out there on the internet are cheaters, but it's important to have a basic understanding of the modus operandi of these fake sages so you don't end up making a fool of yourself giving money to some random hack with knowledge of social engineering.