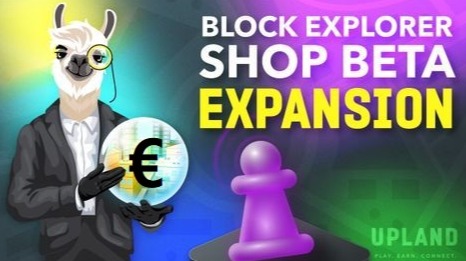 Upland is giving Players the Opportunity to create and sell their own Block explorers (*A Block explorer kind of represents the Player in Upland, it’s basically a Skin that you and other players will see when you’re moving around on the Landscape).

That’s a big thing in my Opinion because I see an incredible potential in that game for a reason-Linden Lab, the creators of the online game Second Life are involved with Upland. Second Life is an Online Game that Simulates Human Life -Discos, Property and so on. It’s basically like an Online Version of The Sims. I remember back in the day when I still lived with my parents that did not allow me to have Internet because they were afraid that they will get a very high bill because of me which took away every chance from me to make some Money myself with things like that. I saw a report about Second Live on the News, they Interviewed a guy who was selling shoes for the characters in that game. He sold each pair for the Price of 1 € and he made new shoes every so often, he said that everybody could have created shoes in that Game for themself but people were to Lazy to do it and they were willingly paying Money for his Designs, he claimed that he made 800€ every Month with Second Live because of that. They also talked about (In-Game) Clubs and how people were paying real money to enter those virtual Clubs. And a DJ that was paid 10 000 Dollar for a Single appearance in a Club. That game wasn’t even for Free, People paid Money to play it and they paid also Money for a lot of Things in that Game.

So, my thoughts are if people willingly paid a bunch of Money for Stuff in Second Life, then they will probably also pay real Money for Upland Stuff :), Unfortunately I’m not very good at Designing Figures out of the blue and the Spots for Shops are also Limited on Upland so not everybody will be able to do it but those of us who get the chance will probably be rewarded.

Upland is expanding rapidly and has a lot of potential, so if someone sells his Explorers for a price of 1€ than I think that there are high chances for that person to earn a lot of real cash. Just Imagine 100 000 or more people that pay 1€ for a block Explorer, that might Sound like a lot now while upland has only around 60 000 active players but where still at the beginning of what Upland has to offer and as the Game expands the number of users will also expand.

There are also Dark Clouds on the Horizon because of the shity governments that are planning to ban crypto cause they don’t want the poor to be able to achive something and get out of their servitude, camouflaging their bad intentions with the pretext of money Laundering which was present long before the existence of crypto which they already know of course. All we can do is wait and see how the new attempt of the EU will play out, if they Force their Anti-Defi Law thru then where Truly Fucked. Their Next attack is imminent and if they really force their way thru than we will have a big Problem here in the EU in the year 2024 when this shitty Law will come into effect. Thanks for reading, seeya around.

Here’s more about the topic:

Here’s a Link if you want to sign a Protest Letter against this Injustice.

For those of you who don’t know about Upland yet: It’s a Blockchain based Crypto Game which you can start playing for free and where you can buy and sell digital properties. Of course, there’s more to it and if you’re Interested here’s the link to their Homepage.