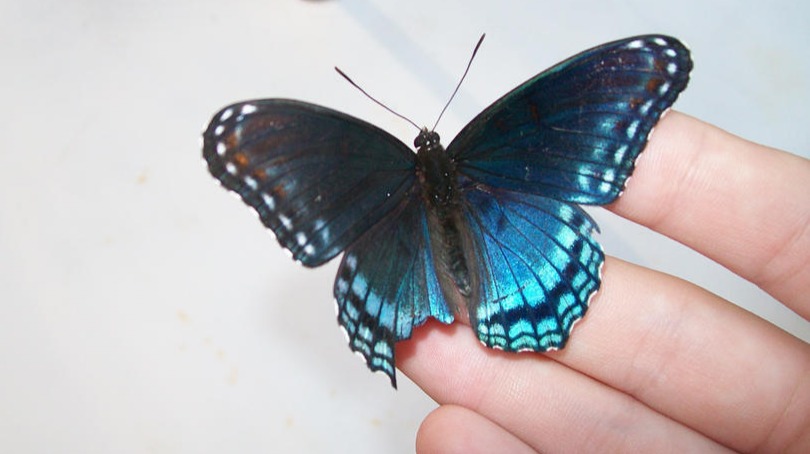 What did this mean for Hannah? Was she going to be healed? Would we witness that transformation? A few days later, Hannah was on the front porch and picked a stem of small flowers from one of our stone pots. Shortly thereafter, an Atlantis Fritillary with a damaged wing landed on the flower in her hand. In delicate manner, it probed its proboscis into the shaft of one of the little purple flowers to drink sweet nectar. Hannah did not seem surprised, but she was fascinated. Hannah loved all of God's creatures and they all returned that affection. Kellie took pictures with her phone. I felt that this moment was also significant; perhaps it was another sign.

Hannah’s little brother came out to look. He wanted in on the action, but he scared the butterfly away. I instructed Luke to give Hannah more space and it flittered back and landed on the flower for a second helping of nectar. We took more pictures. I asked Hannah if I could try. With as gentle a motion as I could employ, I took the flower and the butterfly skirted away. I handed the flower back to Hannah and it returned again.

Hannah’s condition could change more quickly than West Virginia weather. She had a rare intestinal disorder. The motility in Hannah's bowels was almost non-existent. Food and fluid would gather in her intestines until she became very distended. Eventually, her bowels would move around enough to allow passage. Without going into too much detail, I will just say that Hannah would become quickly dehydrated. Hannah would go days and even weeks without a bowel movement back then. It was painful. It stunted her growth. At this point in her life, she had already had a couple of surgeries on her bowels as well as multiple PICC lines and central lines to provide her supplemental nutrition.

Hannah never knew a life without the pain or inconvenience of medical intervention. Every day of her life involved medical drama. We had a scheduled appointment at the Brenner Children’s Hospital at Wake Forest in early August. Hannah had been having a decent summer, by her standards, until about a week before her appointment. Her bowels were obstructed once again. The first few days were ok, but after that, her nutrition began to suffer. There was just nowhere for food to go. Hannah also had a fast metabolism, so her limbs would get really skinny, almost overnight.

We arrived for her appointment and requested a room. They put her on the 8th floor in a room that had a caterpillar munching on leaves beside the entry door. It was about a three to four week stay as I recall. She received cards from her 3rd grade class at school. Her teacher and her class made cards with pipe cleaners crafted into the shapes of butterflies glued to the front. She received several cards from church members at United Methodist Temple in Beckley. Every card had a butterfly on the front. One lady even sent a 14K gold butterfly pendant. None of them had consulted with each other and none of them knew about my vision.

We were there for about three weeks. Looking back, I am thankful that things always worked out for Kellie and I both to be there for every hospitalization. She was still in bad shape when we were discharged, but she had the central line and things were set up at home so that she could receive long term parental nutrition. Perhaps things were about to change for the better. If only...

This blog is about living life to its fullest with thought-provoking essays that will touch on faith, philosophy, art, and fun. www.lifelynx.net