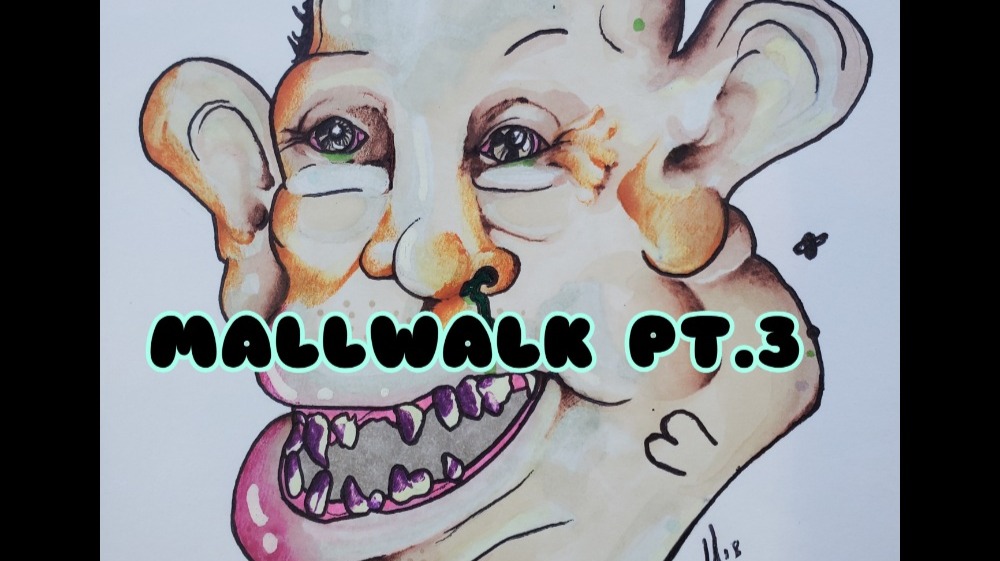 Agent Wayne Helander opted out of all audio comms. He knew that even now the MOLD was no doubt listening. Since the Agencie's initial Awareness of the MOLD , it has been common knowledge that the Entity known as The M.O.L.D.(Matter of Lower Dimensions) has some telepathic abilities. The Bureau had placed Agent Helander in Project GRINDER due to his natural resistance to mental attacks. A semi intangible nanotech based drone was sent in last night . It's goal was to locate the Organism. As of 6 am this morning , the MOLD was undergoing a false gestation within the carpet of Victoria's Secret retail store. This would be the 7th false gestational of this lunar cycle . One more meant certain agonizing doom for anyone within a 50 mile radius of the mall.

Donning his Genco Miniboo multi-spun silk track suit,  Wayne had arrived at The Mall Walk prepared to stop the lunar gestation once and for all. If MOLD slipped back into the Ear Drum Dimension, he no doubt would be back at the mall again. Wayne had vowed to put his mall walking days behind him after the loss of his wife back in 75'.

Not only would this be a successful mission, but he may take home the gold after all...

'Lover Boy' by The Milk Toast Fence Sitters was playing over the food court intercom when Wayne rounded the corner of The Orange Julius. He had fallen back to last place early on as he knew the first deaths would occur somewhere near the lead . This place was full of human-animal plant hybrids. Sbarros' Pizza was the only eatery with the guts to stay open. After first subduing the cashier with sleep gas hidden in his fanny pack, Wayne jumped the counter and began helping himself to a giant slice of cheese pizza.

A loud boom came from the neighboring department store.  A Pterodactyl with a giant human hand for a head , exploded forth from the entrance on giant bat-like wings.  Screams echoed through the food court from somewhere off in the distance .

Life in the kali yuga

A series of short stories based on life in this rapidly changing Technocratic McSocialist Society. Like a speeding train smashing through the Mall Walkers Of America Competition, get your popcorn ready because it's too late to change the channel now. All featured artwork is by yours truly.