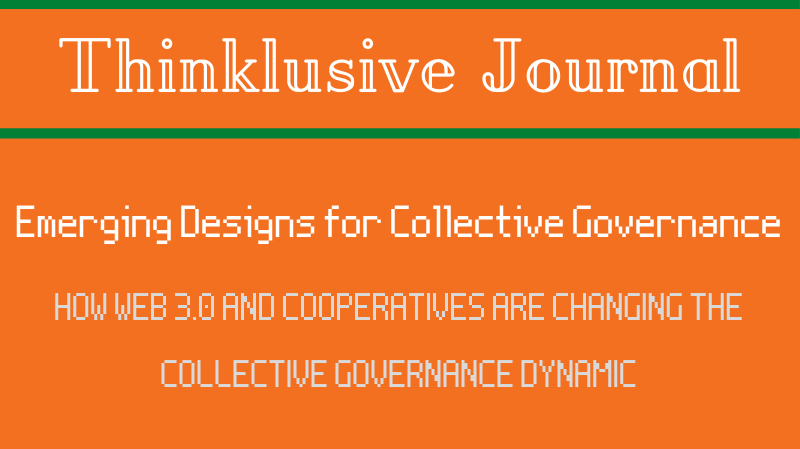 How Web 3.0 and Cooperatives are changing the Collective Governance Dynamic

This article highlights the rise of new collective action methods that are being developed in, or are applicable to, the Web 3.0 and Platform Cooperativism space.

The official version of this article is posted in the Thinklusive Journal on PubPub.

Quadratic voting “is a method of collective decision-making in which a participant votes not just for or against an issue, but also expresses how strongly they feel about it” [2].

A basic formula of the voting cost model for Quadratic Voting can be described as:

In other words, the more a vote concentrates their votes on an issue, the fewer votes a voter gets overall [3].

The goal of Quadratic Voting is to improve upon the well-known and practiced Yes/No voting mechanism (i.e., Binary choices), which does not truly capture the preference of voters on all issues because of its binary nature (all or nothing regardless of varied preferences on multiple issues) [3].

With this type of voting mechanism, even if a voter has varied preferences, they are forced to concentrate their votes onto a single issue (usually the most important to them), even if it means they must vote against their preferences on other issues of which they only have a moderate preference for [3].

Since most of us are, rarely if ever, totally for or against a decision on an issue, Quadratic Voting seeks to allow voters to express their varied preferences on issues, and “‘speak louder’ on the issues they deem most important” [3].

Additionally, other than expressing voter’s varied preferences, Quadratic Voting also aims to mitigate against the “loudest voices in the room problem.”

For example, if there are 10 issues up for a vote, and Jack chooses to allocate 2 votes each on Issues 1 and 2, then Jack’s allocated votes are 4, and his voting cost is 8 [3]. Now Jack can only allocate 1 vote each on two other issues, because he only has 2 voting credits left [3].

Thus, if Jack did not have a strong preference for Issues 1 and 2, he has been penalized for concentrating his votes on Issues 1 and 2 [3].

On the other hand, if Jack did have a strong preference for issues 1 and 2, he has shown his preference and

Now if Jack was moderate on all Issues, Jack may simply allocate one vote for each Issue and show that he has a moderate preference on all Issues [3].

Conviction voting is a collective decision-making mechanism wherein all proposals in a community are considered at every point in time [1].

At any time, the member may remove their preference for a proposal and switch it to another proposal, which removes the amount of conviction based on the half life decay curve [1].

Each proposal has a required amount of conviction for passage, thus we know when the proposal is inline with the preferences of the community [1].

Sourcecred is developing a reputation protocol (also known as social algorithm) for contributions to open source software projects [8]. Contributions include anything that supports a project [8].

The parameters of this Contribution Graph (e.g., determining the weight or importance of a contribution) are determined by the project’s community [8].

For background, consent-based decision-making is a decision-making process where instead of seeking to reach a compromise among members on a proposal (i.e., consensus-based decision-making), we seek to determine fi there are any meaningful objections to a proposal (i.e., looking for a good-enough solution)[5]. Primarily, instead of trying to reach an agreement that satisfies everyone's personal preferences, we are looking to find solutions everyone can live with (i.e., the decisions that members can tolerate)[5] [6].

Concerning decision-making, consent appears the most similar to Quadratic and Collective Voting

The Integrative Consent process is applied in 4 steps:

A member (“proposer”) brings an item forward for the team to consider.

Members may submit feedback on the proposal

The proposer amends the proposal based on feedback in the Comments and Questions Step that are beneficial to the team.

The members propose meaningful objections to the proposal based on a validation criteria (left to be determined by the members). The objector and proposer will work through how to integrate the objection into the proposal.

When there are no more objections raised by other members, the proposal has passed.

Futarchy explicitly relies on the assumption that speculative markets are:

Collective Organizations built with OrgTech provide a great design space for testing the efficacy of Futarchy as a an appropriate means for decision-making [13].

Holographic Consensus aims to be a scalable decision-making model for decentralized autonomous organizations (DAOs) that seeks to rely on relative-majority voting systems for deliberation and acceptance of proposals [7].

In Holographic Consensus, the goal is to curate the attention of the collective onto certain proposals, and utilizing a predictors network (not so dissimilar from Futarchy) to decide on the best proposals [7]. By employing a two-token system, one for attention, and the other for filtering proposals [7].

A proposer (and any other member) can curate the attention of the collective by staking attention tokens to boost the proposal for consideration [7].

The cost of a boosted proposal must be higher than the internal value of a proposal (i.e., the total value of promoter approval of a proposal), and the cost is exponential in relation to the number of proposals boosted[7].

The prediction token is for predictors to stake on the outcome of proposals [7].

For predictors who staked for bad proposals or against good proposals, they will lose their stake [7].

Predictors are not required to be members of the DAO [7].

In Part 2 of HC, Matan Field discusses a simple implementation of the HC model in the Genesis V0.2 protocol [9] [See 10 for greater discussion of technical specifications].

The basic mechanics (interactive smart contracts for assets and rights) of the Genesis V0.2 protocol are:

The DAO downstakes (i.e., stakes GEN against the proposal exhibiting a certain amount of disapproval for each proposal) “a specific amount of GEN on each and every proposal to help incentivize initial predictors to search for good proposals” [9].

The logical flow of decision-making can be summarized as 1) queuing, and 2) resolution [9].

All proposals have Confidence (“how likely predictors believe it to pass”), described in the formula below [9].

The Boosting Condition is a Confidence score above the minimum threshold for a certain period of time¹ [9].

grows exponentially with the number of currently boosted proposals, N_B, with α >1 being the boosting difficulty parameter. The dependency on N_B ensures defensibility against the dilution of voters’ attention.”

Thank you for reading this article on new methods for Collective Action that have arisen in Web 3.0.

Part 2 of this article will discuss Organization Technology (OrgTech).

The Collective Action Problem of On-Chain Governance
Defenders of on-chain governance praise the model for its efficient decision-making and rapid implementation. Critics…medium.com