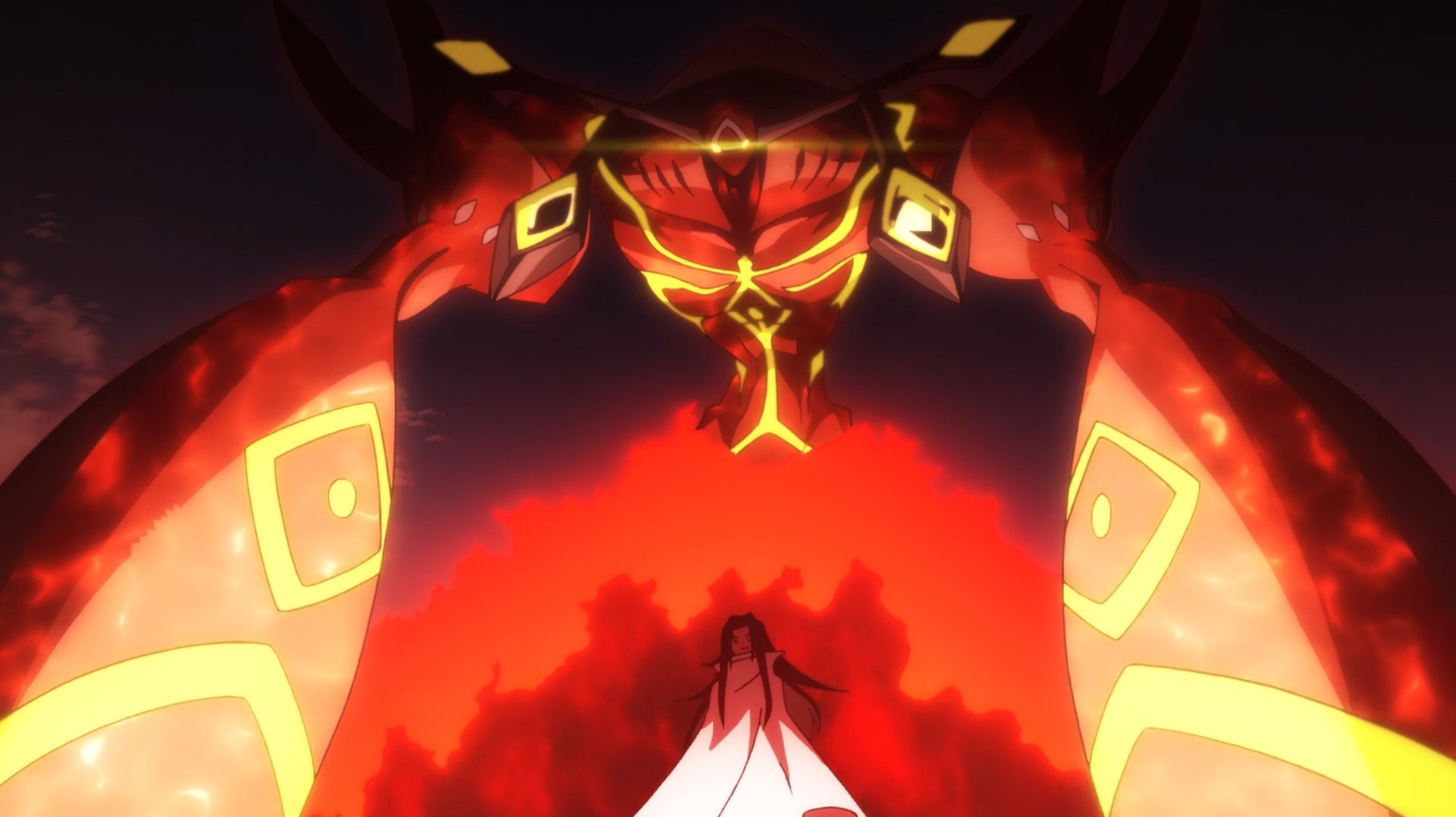 Last week, the 12th episode concluded Ren's character arc where he successfully knocked his father's ideals down a few pegs thanks to his stronger conviction. While the episode before was very well executed, last week's episode fell a bit flat with its incongruent pacing and missed opportunities to build more hype.

Anyways, now that Ren's arc is done, what does Shaman King has in store for Yoh and his friends as the second round of the tournament draws closer?

This week's episode adapts Chapters 77 to halfway through 85. This is the first where an episode concludes midway through a manga chapter. The key moments of this episode were the day before the second round begins, the airport scene, and Yoh & gang travelling through America to find Patch Village.

The day before the second round begins, the episode shows the main characters making their last goodbyes before they will embark on the long, arduous journey. Yoh, however, was an exception as he returned home late at night and went straight to bed. Anna gets mad at him for not even saying hello to her. The episode, then, shows a rare moment where she reveals her vulnerable side and asks Yoh if she can sleep with him to which he complies. 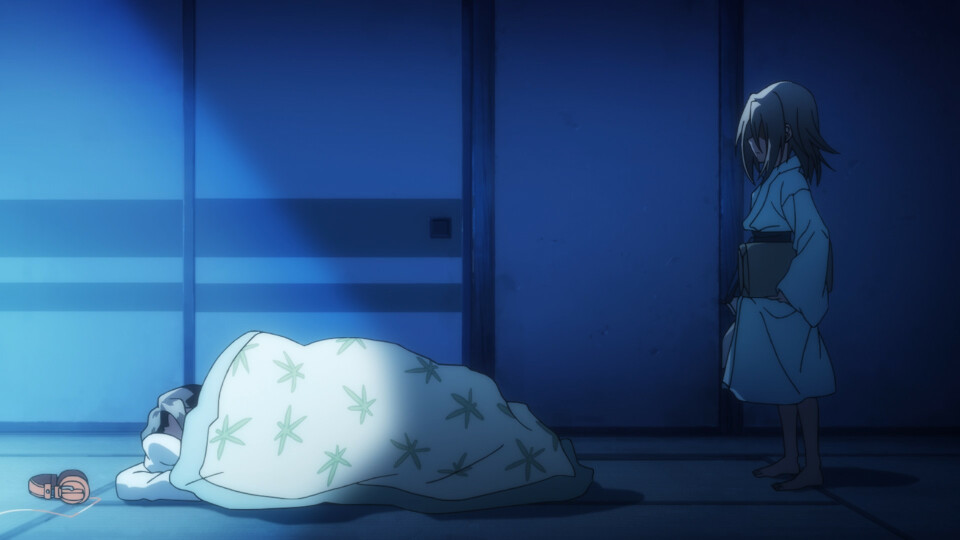 Anna not all too pleased at Yoh not greeting her when he returned home.

The next morning, Yoh meets up with Horohoro and Ryu and they head to the airport where they find Ren eating some takoyaki at a food stand. They all find a place to relax and discuss why everyone is gathered at a random airport before Hao (the antagonist) interrupts their conversation with his catchphrase "So small". Horohoro gets mad at Hao for trying to pick a fight before the latter's spirit, the Spirit of Fire, pummels Horohoro. Hao proclaims that he will become the Shaman King to which Ren disagrees before he tries to take Hao on. However, Ren's power is no match. Before Hao leaves, he tells Yoh that he needs him to grow stronger. 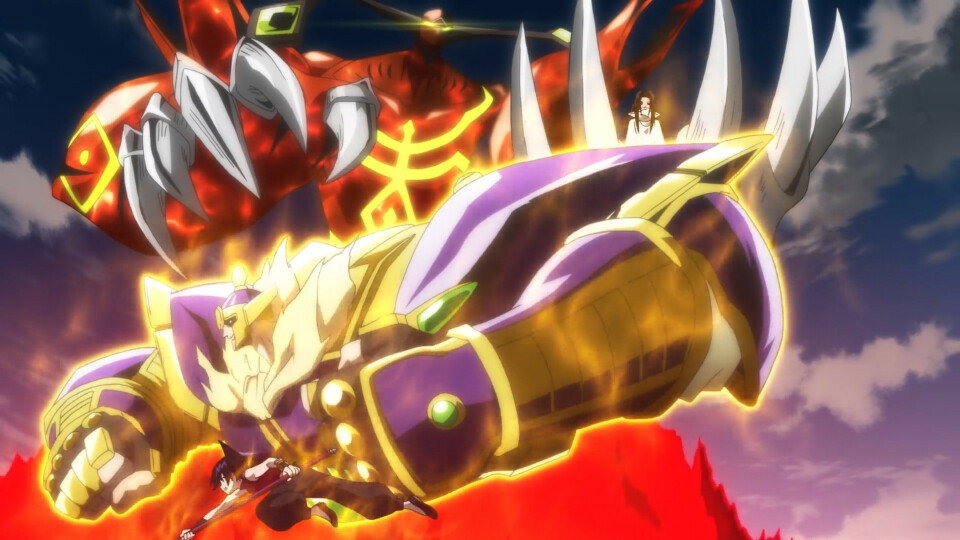 Hao and the Spirit of Fire easily dodge Ren and Bason's frontal assault.

All the shamans board the plane, the Patch Jumbo to fly to America. However, during the flight, Goldva makes a sudden announcement that (1) they need to find Patch Village on their own and (2) the plane will disappear immediately. It turns out the plane is one big Oversoul and everyone falls out of the sky once it vanishes. Hao, with his immense amounts of furyoku, is able to use his spirit like an airship. Since Yoh and gang only have small amounts of furyoku, they all collaborated together to focus all their spiritual energy at one point to cushion their fall. 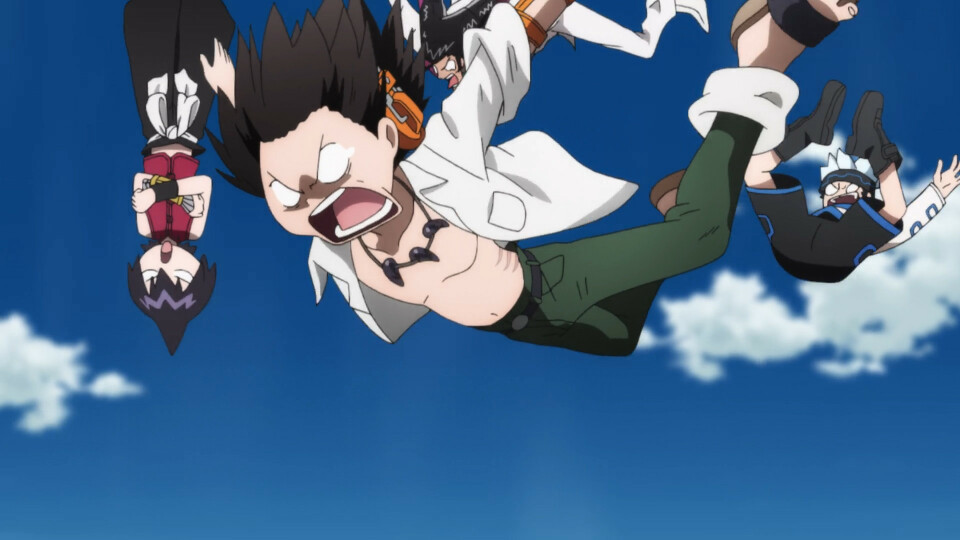 Yoh and his friends suddenly falling from the stratosphere. 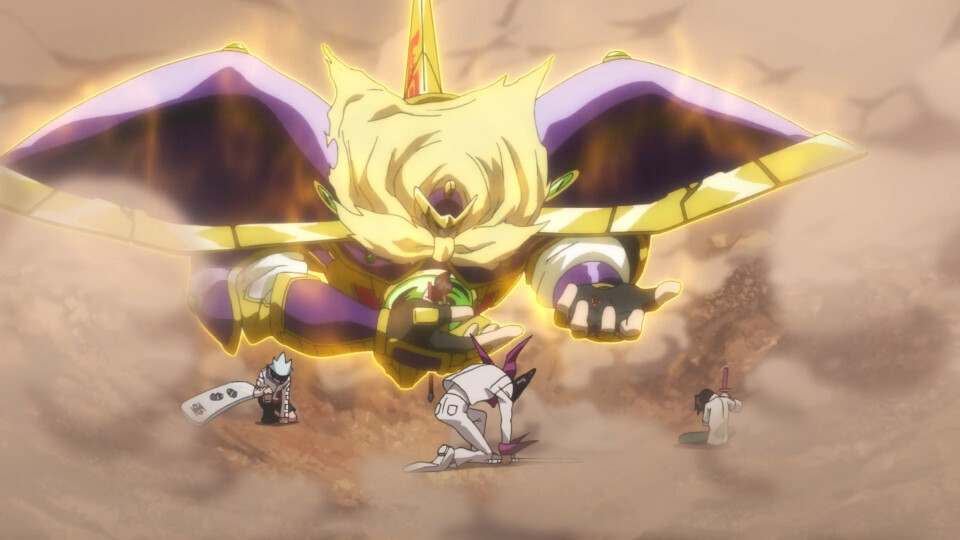 Yoh and his friends successfully survive the fall by using their Oversouls as cushions.

Stuck in the middle of western US, the team tries to figure out where to go. Ryu manages to get his group to hitch a ride on a truck to a nearby town where they try to gather information on Patch Village from a local library. As they are leaving, they are blocked by a Seminoa shaman named Lilirara. She warns them about the Patch Tribe's atrocities and tries to convince them to drop out of the tournament, but the group declines. In response, she attacks them with Seminoa dolls and when they come in contact with the group, they experience excruciating pain from their limbs getting severed. However, it turns out they are memories of the Seminoa spirits who died to the Patch Tribe. 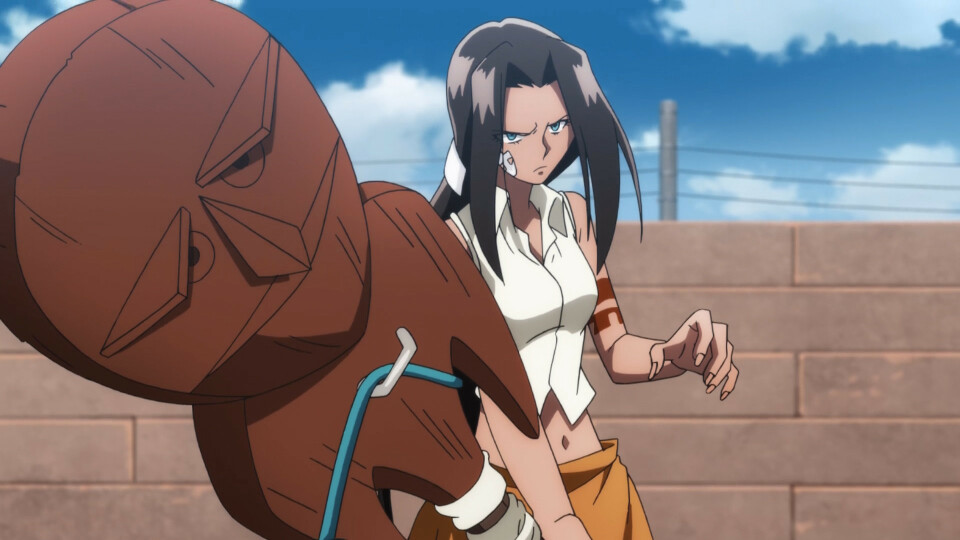 Lilirara tells Yoh and his friends to go back home.

Lilirara offers the group to experience the spirits' memories to which they accept. Yoh and his friends experience the memories of the Seminoa warriors who got slaughtered by a Patch tribe member who looked like Silva and the Spirit of Fire, the same spirit Hao currently holds. Before their memories end, Yoh notices that the Silva lookalike used the same "So small" catchphrase. The group concludes that the Patch tribe member from 500 years ago was a past incarnation of Hao. 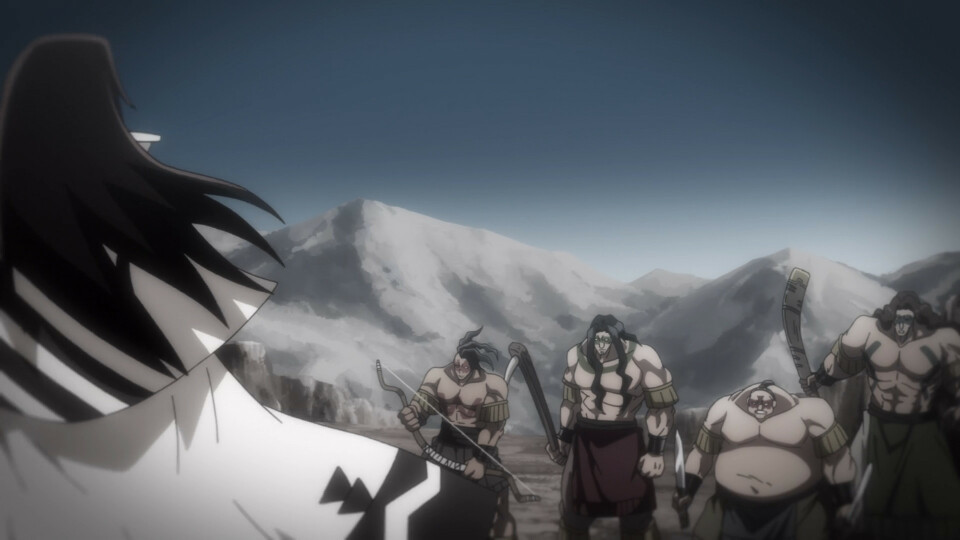 Hao reincarnated as a Patch Tribe member before he kills the 4 Seminoa warriors 500 years ago.

The group tells Lilirara that they need to keep going to stop Hao, but she refuses because of Hao's immense power. Three shamans interrupt the conversation and are about to attack her before Horohoro smashes them while shouting his dream of making a fuki field for the Koropokkuru. Hearing about his dream, Lilirara bursts out into laughter at the randomness. Convinced of Yoh and his friends' conviction, she gives them the location of Patch Village.

As Lilirara sees Yoh and gang off, she says there's more work to be done, but Hao suddenly appears before her and impales her with the Spirit of Fire. Hao reveals that he reincarnated into a Patch member 500 years ago to steal the Spirit of Fire and incinerates Lilirara comwhollypletely. 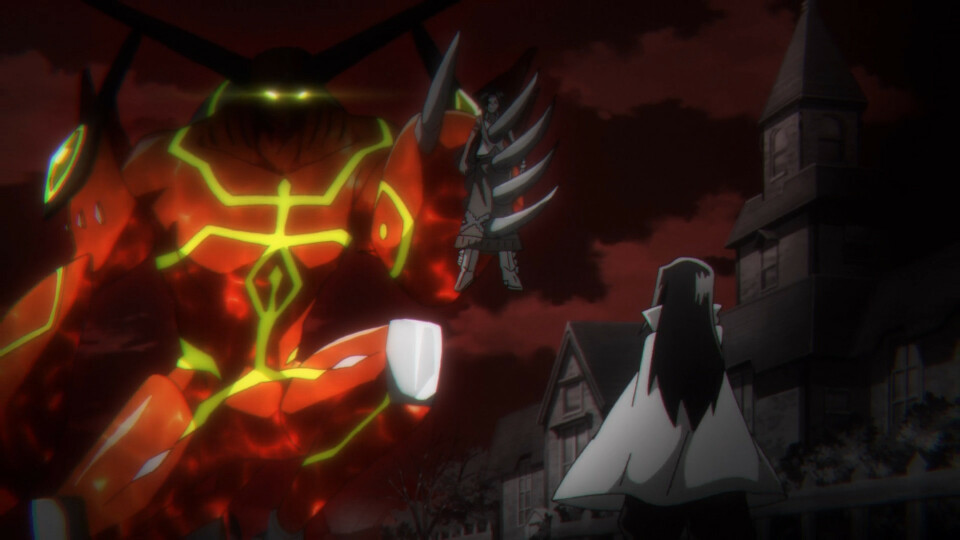 Hao impales Lilirara with the Spirit of Fire before he kills her.

The episode was a nice blend of humor, melancholy, and tension. Even though it adapted a lot of chapters, not once did it feel rushed.

The beginning was very wholesome with everyone saying their last farewells. Not mentioned in the summary, it was pretty cool seeing Amidamaru and Tokageroh getting along like friends, and Amidamaru was courteous enough to leave Yoh and Anna alone. Seeing Anna show her softer side and Yoh reciprocating her was an incredibly sweet moment that the original anime severely lacked.

Hao's entrance was very grand and imposing. The episode did a good job throughout showing how large of a threat Hao is. It wasn't just the initial scuffle at the airport, but also how he reincarnated into the Patch tribe to steal the Spirit of Fire.

As for the funny parts, I enjoyed the scene where everyone fell from the sky when the Patch Jumbo vanished. I liked how the plane just disappeared in a single frame rather than gradually fading away for that comedic effect. The dialogue as Yoh and his friends fell was really funny. For instance, Yoh was shouting how he was having a dream about flying before Ren calmly told him that they were, in fact, falling.

I was a little disappointed that the anime skipped out on showing Faust in this episode. In the manga, Faust fell alongside Yoh and gang, and his way of surviving the fall was hilarious in an ridiculous sort of way. To recap Episode 6 a bit, the anime censored out a scene where Faust revealed that he pumped his body full of morphine to not feel pain. Well, Faust's plan to survive the fall was to let his bones shatter since he couldn't feel pain thanks to the morphine. I do have to wonder if depiction of drug abuse in media is a taboo in Japan and hence why those scenes were left out. 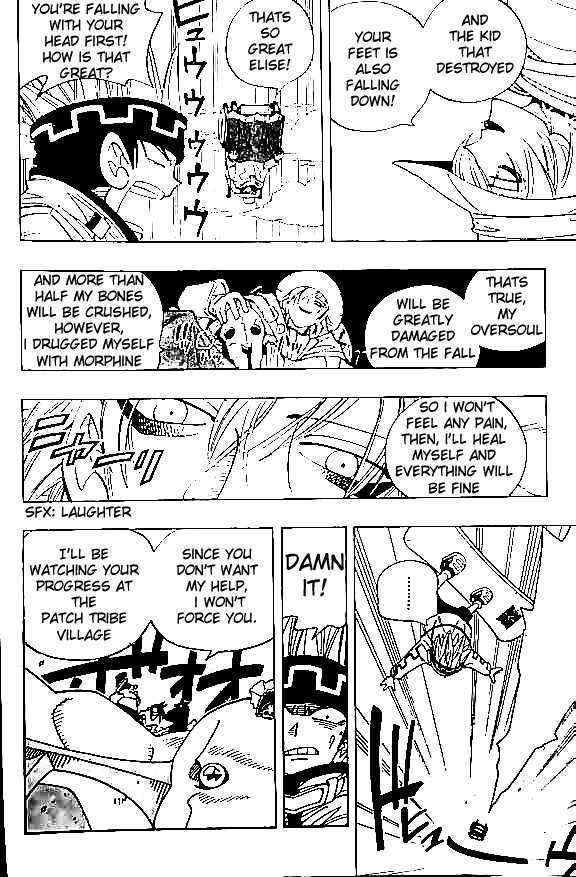 I like how Faust is somehow still attached to his wheelchair and maniacally laughs as he descends.

While Lilirara's time was very brief, I think the episode did a good job using her character for tension. I was glad that the anime did not pull back its punches with the violence when Yoh and his friends experienced the painful memories of the fallen Seminoa warriors. And it was nice that despite her serious demeanor, she was capable of laughing. A shame that at the end, Hao killed her.

Ultimately, this was a very well-adapted episode. Had it not skipped a few scenes from the manga, this would've been perfect. The pacing was executed well; the tense, heartwarming, and funny moments were all very convincing; and the art was very clean and consistent.

P.S. Sorry, not sorry for the lame pun in the title. 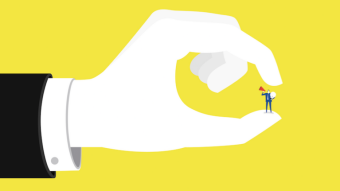