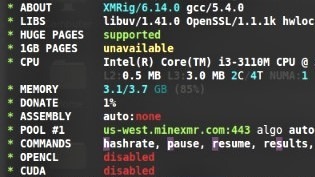 Profitability of mining Monero (XMR) on an ancient laptop

Having a small supply of free, solar power and a dinosaur 2012 Dell Inspiron laptop sitting there doing nothing, I had the brilliant idea of getting it to work for me and mine crypto all day for some sick passive income gainz (or so I thought lol).

With no dedicated GPU, this old relic still runs on Linux Mint and is powered by an ancient Core i3-3110M processor which could just about run StarCraft 2 on low settings in its 2012 heyday. Imagine if I had invested in Bitcoin back then instead of this laptop...

Only a number of PoW (Proof-or-Work) cryptocurrencies are worth mining with a CPU, namely VertCoin (VTC) and Monero (XMR) off the top of my head. These have ASIC-resistant algorithms and are optimized for CPU mining. I decided to go for Monero (XMR) as I am way more familiar with this project.

XMRig is one of the best known and easiest to use CPU miners for Monero's RandomX algorithm. Installation on Linux was super easy and it can be done either by downloading the .tar.gz file from XMRig.com or via command line. I also know that the windows version can be set up in like 10 minutes.

The XMRig Wizard available on their website makes it too easy to set up the mining parameters (In my case, CPU-only mining, with a small 1% donation to the Miner). Once set-up, the tool gives you a command line code that you just pluck in and off you go (n.b. make sure to run it with root privileges for optimization).

I chose MINEXMR as my mining pool because I found it was the one with the smallest payout amount of 0.004XMR which is about USD$ 1.00 at the time of writing (I knew it was going to be struggle lol). It also has a very nice online dashboard with all sorts of cool stats.

With my laptop's CPU running at full-pelt like a jet engine, I thought I was perhaps onto something. However, I ROFLed hard when it was conclusive that my average hashrate had stabilized at about 200 h/s.

Compared to the whole network's hashrate of 2.58 Gh/s at the time of writing, my hashrate input of 0.000000077% was not going to force the Monero team into an emergency meeting to discuss the development of a new dinosaur CPU-resistant algorithm.

For LOLs sake, I installed XMRig on my current Dell Inspiron (Ryzen 5 3450U with integrated AMD Vega Graphics) and mined with both the CPU and GPU for comparison, achieving a whooping average hashrate of 600h/s. To be honest, 10 years later and this laptop is probably x1000 more powerful but can only yield a x3 increase on the hashrate. I wonder if this has anything to do with the design of RandomX...

The Results: My Gainz

Assuming the same mining conditions of the network and that XMR's price remains within the same order of magnitude, my sick passive gainz will amount to about USD$ 1.00 per month (excl. the 10% transaction fee), with the computer running 24/7 at full throttle.

Perhaps I won't retire early, but this act of micro-mining epiphanizes real decentralization. I wonder what would happen to the hashrate if a few million people with cheap, preferentially green electricity and dinosaur-laptops that still work like mine started setting up their impromptu rigs like me. After all, how many of the billions of people in the developing world still depend on relics, not to mention old PCs.

I guess mining from laptops is not the most energy efficient, compared to proper GPU or ASIC rigs, so perhaps not the best solution environmental-wise. But improving the security and participation of the already amazing ASIC-resistant PoW XMR network is a Win-Win situation in my books.

***Disclaimer: Nothing in this post is financial advise, only the results of a daft experiment that made me lol***

Simple Observations on anything Crypto.