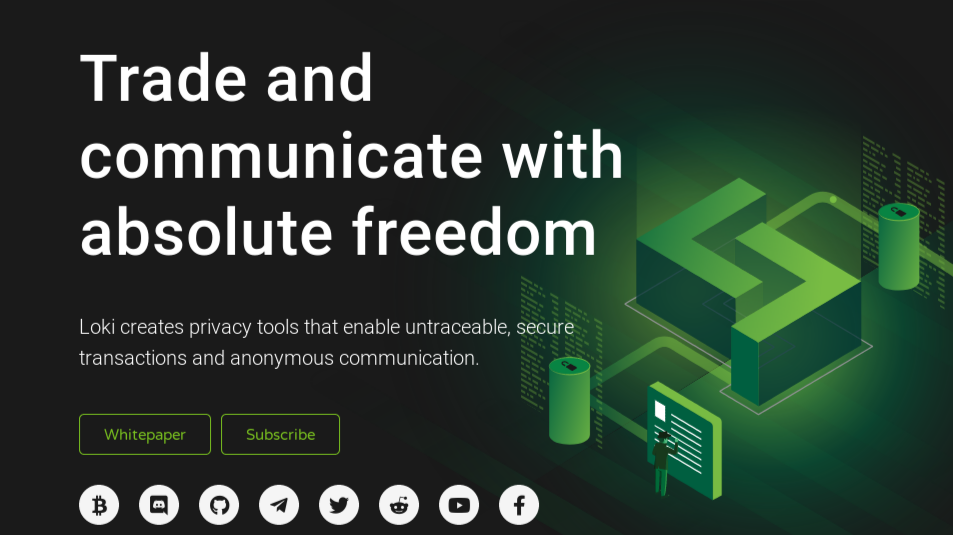 Loki, is a Hybrid proof of work/ proof of service system. There is a unique way to incentivise a full node operation. With those nodes, a secondary private routing layer is created. A novel method, called swarm flagging, enforces nodes to have minimum fuctionality. Loki, is based on the Monero code, with modifications.

Bitcoin's open blockchain, allows, blockchain data analysis to track, and follow transactions. Monero's transactions, are orders of magnitude, larger than Bitcoin's with the result of, high bandwidth and storage needs. The service node network, allows users to transmit and receive anonymous data packets. The network is a Sybill resistant network, with properties like Tor and I2P. The service node network, can be used, to send private messages.

The project uses the Cryptonote elements to increase privacy.

The ring signatures, allow a transaction, to be multi-signed, although, only one signature, is the sender's signature. A fixed ring size of ten, is enforced on the Loki network. Stealth addresses, ensure that the true public key, of the receiver, is not linked, to the transaction. With RingCT, the transaction amount, is obfuscated.

There are three types of rewards.

The Loki, network, has three different types of rewards. The mining reward, is the 45% of the block reward, that is given to the miner that constructs the block. The next 50%, goes to a service node, or two. The service nodes, are in a queue, and the node, that has the longer time, since the previous reward, is awarded the new block's reward. The rest 5%, goes to governance operations,. 3.5% goes to Loki foundation, and the rest , is reserved for the project funding.

End to end encrypted messaging, can be done with the Loki Messenger, The message routing changes, depending on, if the receiver, is on line, or off line. The application, enforces the Perfect Forward Secrecy Protocol, and Deniable Authentication. With those protocols, the messenger, is extremely difficult to compromise.

SNApps, allow users to create marketplaces, forums, social media and many internet applications,on their own machines, or servers, maintaining user-side anonymity. With those applications, wonderful, online communities can be created.

Blink allows transactions, to be confirmed, before being included in a block. The Service Node Architecture, allows a functionality, similar to Instant Send, that is used on the Dash network. With special key images, a Service Node, is a witness, that that transaction, is spent. If another node tries to double spend, the same key image is generated, and the witness node, informs the network, that the transaction, is already spent.

The project has a good governance model

The Loki foundation, is a non-profit, registered in Australia. With the help of the foundation, the project can operate in a well defined legal framework, giving legal protections and obligations, to all those working at the project. If a party, wants to present a proposal to the Service Nodes, the party, must construct a proposal transaction. The proposals, are getting votes from the Service Nodes. All funding, is done with funding blocks, similar to the transaction blocks.