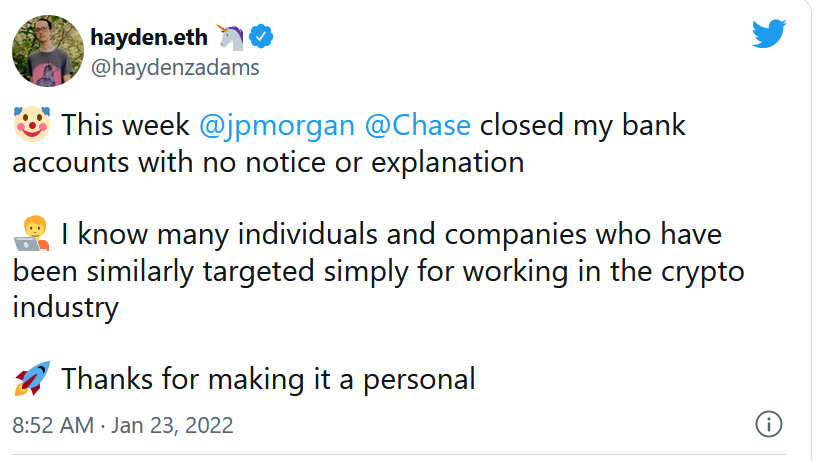 JP MORGAN Chase Bank CLOSES Hayden Adams (Uniswap founder) without notice! Was it Legal? Why did it happen? Adams thoughts on the closure

What's The Story Behind Chase Bank?

JP Morgan Chase Bank is a widely known and frequently used banking institute that was founded over 20 years ago in December of 2000. Chase bank is an American multinational investment bank and financial services holding company and is currently the largest bank in the United States. It is also the largest bank per market capitalization and in the top five largest banks across the globe speaking in terms of the total assets accrued totaling in at $3.831 trillion USD to date.

Who Is Hayden Adams?

"Programming with money is just really fun. Being able to write functions that send money and receive money in a native way is very fun."

Hayden Adams is Cryptocurrency entrepreneur sensation that first hit the Cryptocurrency scene in 2017. He then quickly took the exchange by storm creating Uniswap V1 that was released at Dev Con 4 in November of 2018. The launch happened at a time when ETC had dropped 95% from its peak value, that alone being a deterrent the token itself was also missing key attributes.  While Uniswap V1 had some buyer appeal largely in part to some unique characteristics, it was still  missing important, necessary features. For starters, orders were routed through the ETC blockchain and a token exclusively. Since the first launch of the token it has been met with renowned and widespread success, with a 24 hour trading volume of 684 million to date, making Uniswap make the top 3 decentralized exchange via trading value. Hayden Adams success has not gone unnoticed as Adams made CoinDesk's most influential people in Crypto in 2020.

What Is Uniswap (UNI) Exactly?

Uniswap is the largest decentralized exchange (DEX) operating on the Ethereum Blockchain. Uniswap permits users located anywhere in the Globe to trade Crypto with no middle man. The governance token UNI that allows participants to vote on important protocol changes rates in the top 4 at number 4 per market cap on Coinbase, valuing in at more than $18 billion. Uniswap was on of the first Decentralized finance apps (DEFI) to gain extreme popularity on the Ethereum block chain. While DEFI has become a very popular and widely used trend, Uniswap is still the most popular Defi App by far.

What Has Adams Said Regarding The Impromptu Cancellation Of His Account?

While the closure has made headlines via the catty way JP went about it (not giving Adams any notice whatsoever before the impromptu closure of his long standing account) Adams hasn't said TOO much regarding the topic but he did take to Twitter to voice his frustrations with the unfair closure tweeting,

"This week @JPMORGAN @CHASE closed my bank accounts with no notice or explanation. I know many individuals and companies who have been similarly targeted simply for working in the crypto industry. Thanks for making it personal."

While Adams kept it short and sweet he did throw a little shade tagging the banking institute and letting them know that there discrimination against Crypto workers has not gone unnoticed. It also does not seem to be coincidental that the closure comes a mere few months after SEC opened an investigation into UNI.

What Is Shadow Debunking Cryptography?

The current situation was commented by former Commissioner of the Commodity Futures Trade Commission (CFTC) Brian Quintenz, who responded to Hayden’s request to clarify the situation :

“Probably shadow debunking cryptography by bank inspectors as directed from above.”.

Quintenz went on to explain himself.

“if the inspector told the bank that a particular client is capable of risky investments, the bank may terminate the contract with him. However, he does not have the right to inform the client of the reason for the termination of cooperation. ”.

This was a quote derived from an article in the Wall Street Journal On November 20th.

So what was the former Commissioner of the Commodity Future Trade Commission (CFTC) referring to with this statement? I think the best place to start is to define each word for what it is and that will give you a clear understanding exactly what Quintenz  was meaning in layman's terms.

So first off Shadow is a figurative way of speaking when referring to doing something in private or "in the shadows". So in other words to keep things on the low.

Debunking is a term widely known to mean to prove the falseness of something.

Cryptography is a guarded communication procedure where only the sender and the designated recipient of a message to view its contents. It has a close relationship with encryption which is the act of scrambling ordinary text into what's known as ciphertext. This method is used when transmitting electronic data . Signature and hash are two terms included in understanding how Cryptography operates.. Cryptography draws beneath how blockchains work and support it to run well. Some of the function defined in the cryptography is useful in regards to the blockchain.

Is It Legal To Close A Customers Account With No Notice?

While it is incredibly rude and terrible customer service to cancel a customers account without notice it does not break any laws. Just a moral code of ethics, especially when the closure is due to discriminative purposes as this seems to have been.

Most of the information that I was able to dig up online stated that an account can be closed via the banks discretion and for security purposes the customer does not need to be notified prior to this happening. Some of the purposes listed as reasons that an account would be closed was account inactivity or low account activity. Its safe to say that a successful entrepreneur such as Hayden Adams probably did not fall under either of these categories. While I have been wrong before I don't suspect that I am this time.

Another reason that was listed as to why an account closure could happen is security purposes or fraud. Again, I feel if this were a possibility Hayden would have never brought the closure to light in such an irritated manner, but again anything is possible.  In my opinion it seems as though the closure was a result of discrimination regarding Cryptocurrency and the decentralized finance (DEFI) apps that UNI is such a big part of. I also do not think that it is a coincidence that this closures timeline is so close in proximity to the investigation that SEC announced merely three months ago.