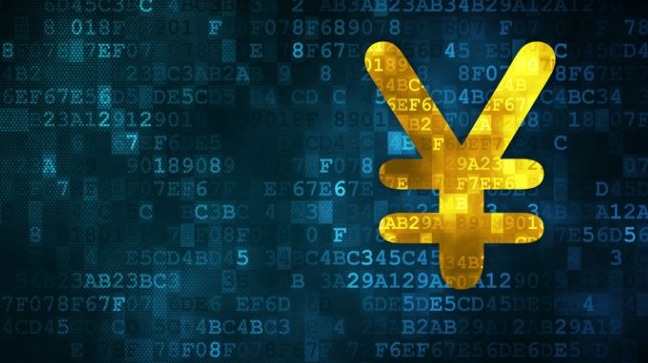 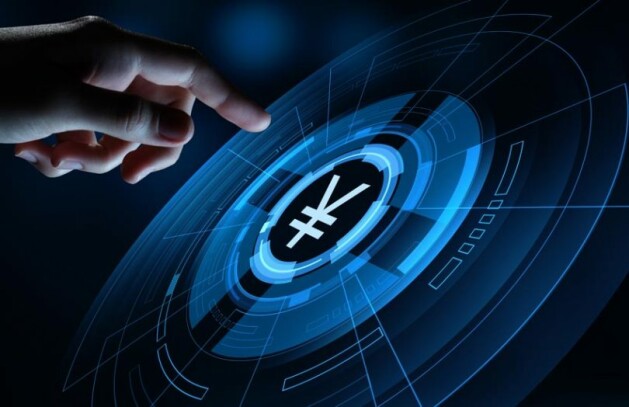 China is well known country to censor media to not provide any contents to the world and that is why presently 'WHO' could not message the world media with enough information on correct actionable time period about covid-19 outbreak in wuhan region in China .

Here i am writing about current news which is boiling inside china and somehow is leaked by some social media users about their activities related cryptocurrency which you heard rightly on title about 'DCEP' coin.

Before we know DCEP coin ,lets know about CHINA stand on cryptocurrency in 2018  .China banned bitcoin and related cryptocurrency through banning all the mining stations, exchanges and arresting people doing transaction in cryptocurrency which put the negative impact on crypto market and it shrank from 8 billion dollar capital to 2 billion till the present time.

After 2 years , China internally did trial of their own centralised coin called 'DCEP'( Digital Currency Electronic Payment) which seems successful but this information is totally confidential until we got some picture from local unofficial media .

Basically, DCEP is Digital Currency Electronic Payment which is centralised by government of china and its pegged with Chinese national currency RenMinBi (RMB) with 1:1 ratio. as per source , its built on Blockchain and Cryptographic Technology .The overall intention to bring this digital currency to control the Chinese Market with reducing printing , manpower, security threat and increasing the government intervention ,taxation, administration. other intentions are to connect global market for trading with DCEP ,competing with US dollar in every aspect of trading and e-commerce payment.

Facebook Company also going to launch 'LIBRA'  which is interesting project for big Fin Tech innovation but China stated that it was threat for sovereignty of china by mentioning that digital currency must be launched by only government or central banks.

There are some third party stable coin like Tether which is pegged with 1:1 in china with currency called 'CNHT' but its not legal tender by Chinese government .

The head of people bank of china Mr Mu Changchun has said that DCEP is pure currency which  has no speculation like bitcoin and it is just digital form of RMB .

DCEP is ambitious project ,being implemented by Chinese government  where the motive is just to detect money laundering ,counterfeiting  and illegal transaction among all the network .it is also going to cut all the unwanted cost which occur during SWIFT transaction or external bank transfer . in its initial stage ,these currency will will distributed to all the central banks of china by People's bank of china where these currency will be swapping by collecting all the physical currency bills and in later stage ,these currency will be distributed to giant fin tech company like Alipay, we chat pay.

Overall , DCEP is centralised regulated sovereign issued currency which has no mining and staking protocol on its network . 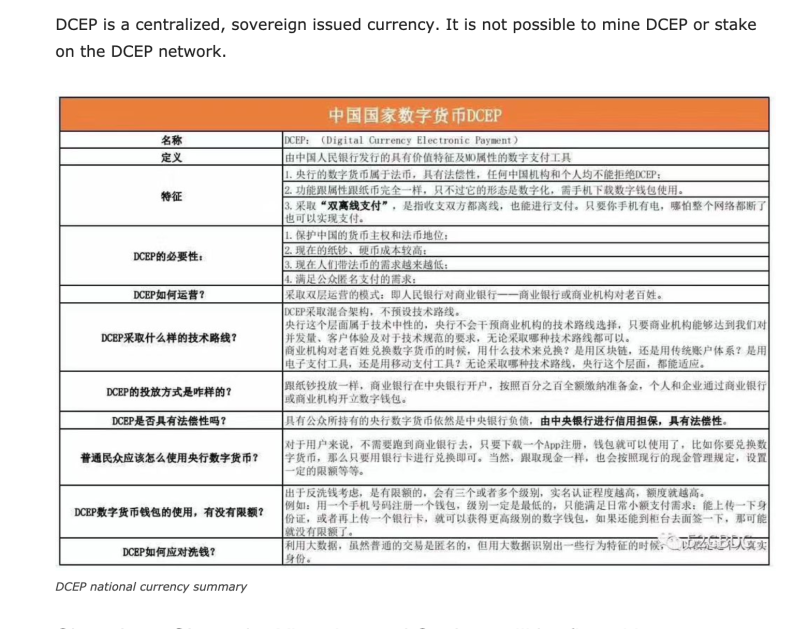 The above picture is the summery of DCEP currency.

There are four state in china where this currency will be used and these are shenzhen ,Chengdu , Xiong'an , Suzhou. 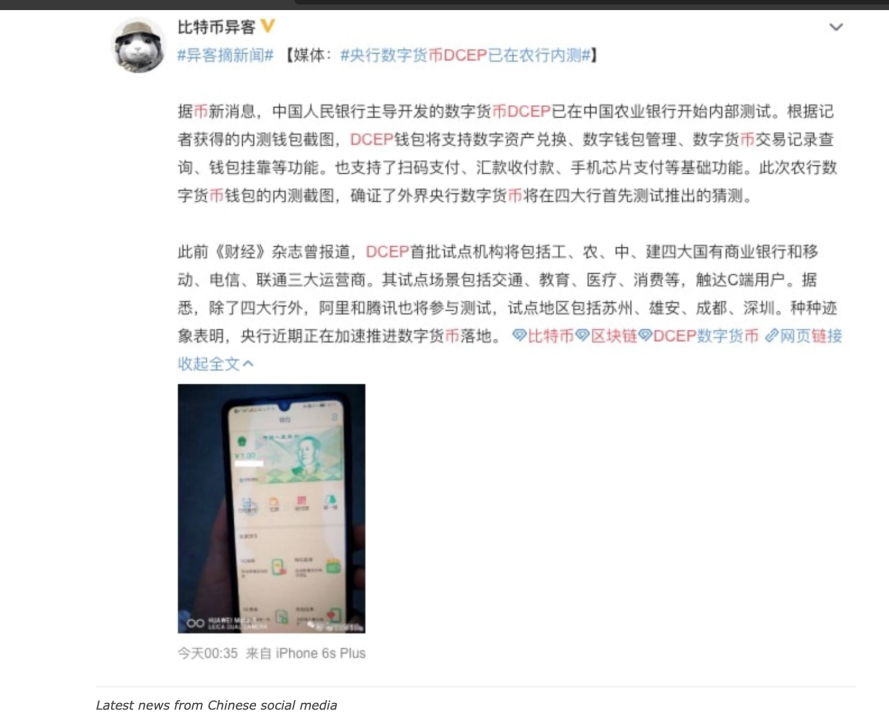 The above picture is to show you all that this currency already on trial and being used by people there.

yes its compulsory to all the merchant in china to adopt DCEP in their payment gateway ,currently WeChat pay , Alipay, Apple pay , Samsung Pay , Huawei pay are the most reliable platform which are being used as payment gateway in china but as DCEP launching in china soon ,must be accepted this currency as primary mode of payment by all the super merchant companies .Those if deny accepting this then consequence will be suspension or cancel of their licence in financial authorisation .

DCEP also can be used offline in the device through NFC which can be good advantage to adopt this currency in those area where internet is still out of reach .this things will give huge impact on growing of DCEP in people's republic of china .

DCEP is not tradable currency so far as government is fully focused to deploy to all the major banking in china .

How DCEP going to impact US dollar : 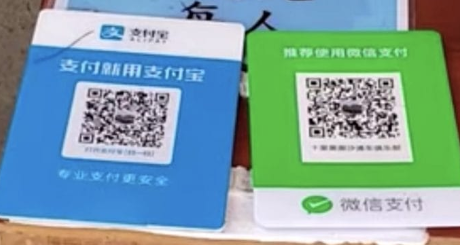 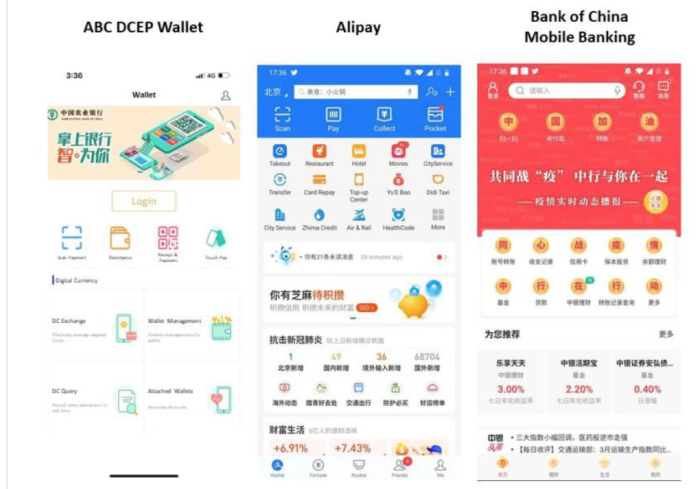 China has already cleared his intention by building the 'one belt road' initiative where they can do billions dollar trade from African and European countries  and if their thinking is scalability with security  then doesn't fit enough by printing billions RMB then use transportation to distribute or manage supply chain to maintain monetary ecosystem .so there plan to bring DCEP is working well with their goal to achieve economic expand . DCEP is digital currency can be tradable from any part of the world which can ease the government to fully focus on trade and development . in the same system , the government will have full power to track each and every transaction and lock and unlock the wallet if something fishy going .

if we take USA in this frame then we find that USA still far behind to develop this kind of technology initiated by US government . LIBRA is centralised and controlled by Facebook but this currency still outsourced for US government and has no any legal control for economic purpose rather ban this currency if any serious security threat happen .china fully understand the need of digitalisation in monetary system and thats why working consistently to develop and upgrade their economic .