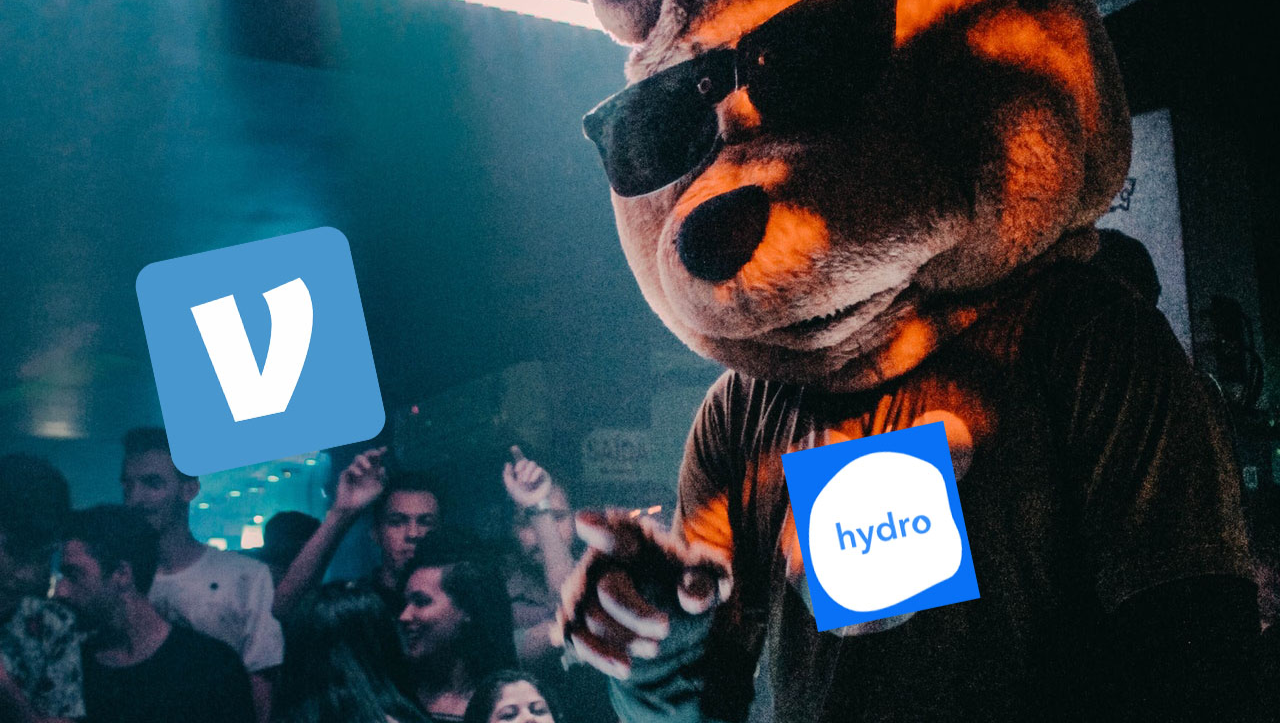 In the world of ever-evolving FinTech, there are a plethora of new and fascinating financial applications available for you to be able to pay for things, whether it is your family & friends or to a merchant. Cash and checks are oldskool, really old oldskool! The younger generation is quickly shifting to modern age applications like Venmo in America, or Revolut in Europe.

Introducing Venmo - The Not So Private Payments Application

The growth of Venmo is truly staggering when you realize that they have processed over $62 billion in volume in 2018 alone. $19 billion of that volume was clocked during the fourth quarter of 2018. The PayPal owned payments application has managed to garner over 40 million users and is accepted at over 2 million stores.

Venmo is generally known as a payments application in which users pay friends and family back in an easy to use manner. With so many users already signed up to Venmo, it is simple to just ask for their details to repay a friend for lunch or for some concert tickets. 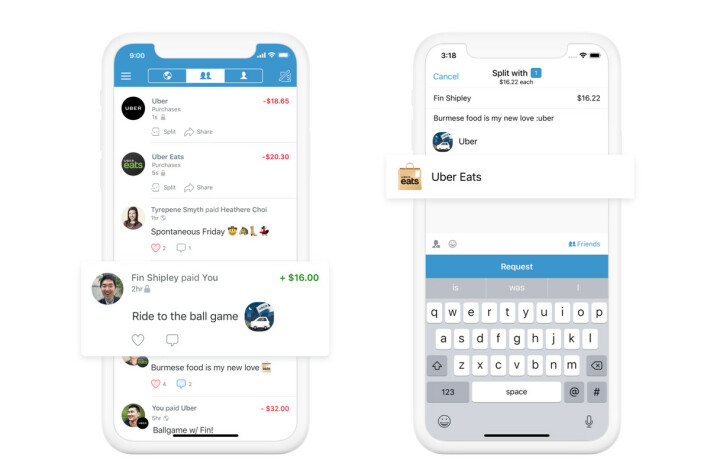 The user interface is extremely intuitive making it very adaptable towards a mainstream audience. The application allows users to connect their bank accounts to the application to make it super simple to make payments to friends and family.

Although the application is great and it does make payments really simple, the problem comes in when you realize that Venmo does not really have the privacy of their users at the top of their list. In a post-Snowden/Cambridge Analytica world, privacy should be at the forefront of everybody’s mind. We have seen the power that mass data collection has when used appropriately in advertising. You should not let your privacy slip because once it is gone, it will remain gone!

In order to increase engagement, Venmo has created a social networking component to their application which is not privacy preserving what-so-ever. By default, all P2P transaction details (except for the transaction amount) are visible for the entire public to see.

The option is there for the users to change the privacy of the payment but it is not set by default. "Privacy by default" will become a hot topic over the next 2 or 3 years as application developers start to protect the privacy of their users by having maximum privacy settings as default. 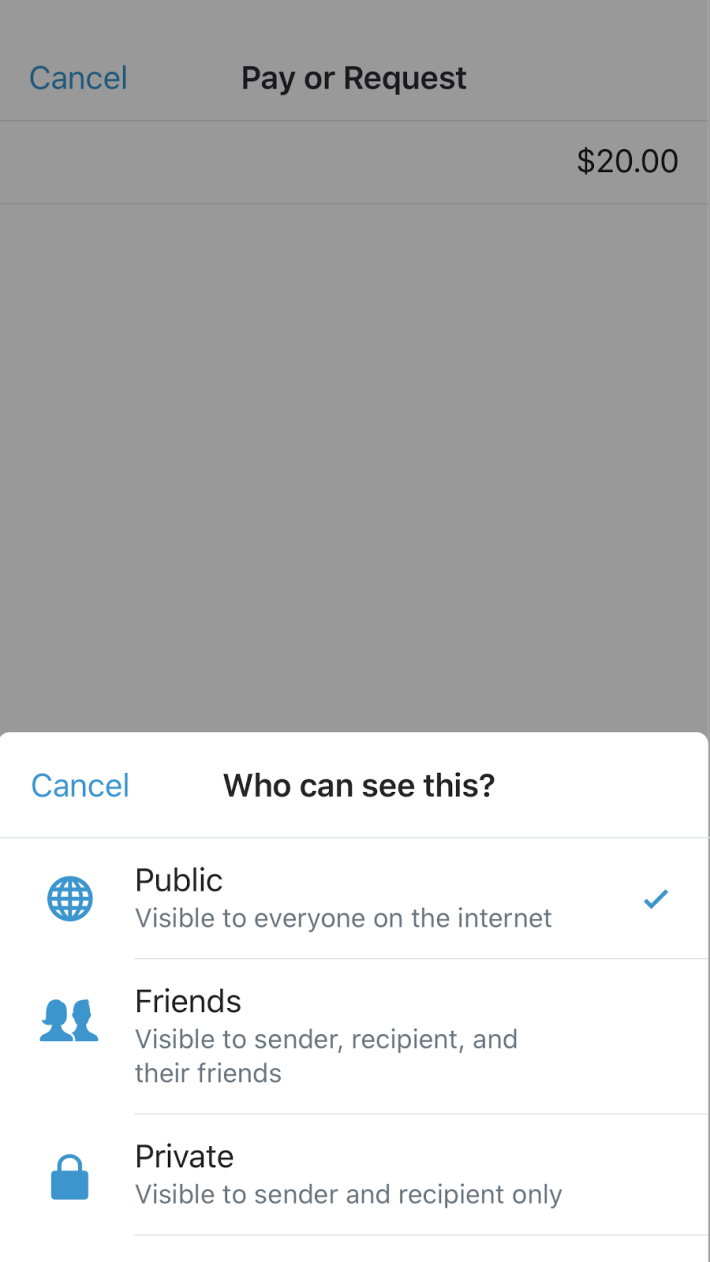 It seems that most people don’t even know about the privacy adjustment settings available considering the fact that so many people still are sending public transactions to their friends. Maybe they just don’t care about their privacy? You can see the evidence of this through Vicemo, a tool built by Mike Lacher and Chris Baker which shows all the Venmo payments referencing any illicit activities. 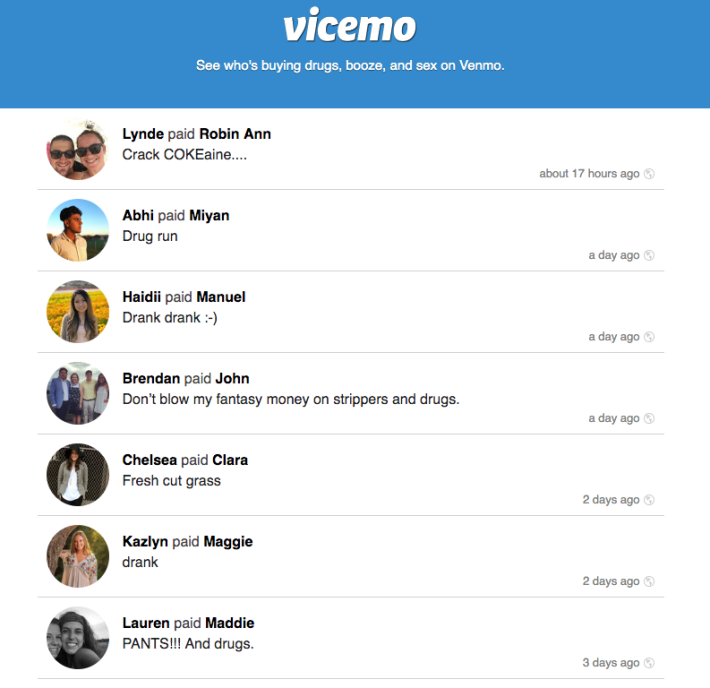 Just scanning down some of the comments left in the transactions over the past few days you can clearly see the references to drugs and strippers. Of course, the majority of these comments will be troll type comments, however, we must not forget that an application that has 40 million registered users does not have privacy at the forefront of its mind and would rather create a social network to propagate their service.

Looking further into the Vicemo list above, we can clearly see how non-privacy preserving Venmo actually is. We can see that “Lauren” paid “Maddie” for something - be it pants or drugs (or whatever else). If I knew Lauren or Maddie, I know what they are up to - which is not private what-so-ever!

This dubious default privacy setting policy has left them in trouble with the Federal Trade Commission as they argue that changing the privacy settings has historically been too “onerous”. Furthermore, the FTC believes that Venmo did not make it clear that users need to change multiple settings in order to make their transactions truly hidden - something which they had based their marketing campaigns upon.

Cryptocurrency projects’ applications, such as HydroPay, will truly allow P2P payments that are private and secure in just as a user-friendly manner as Venmo has. 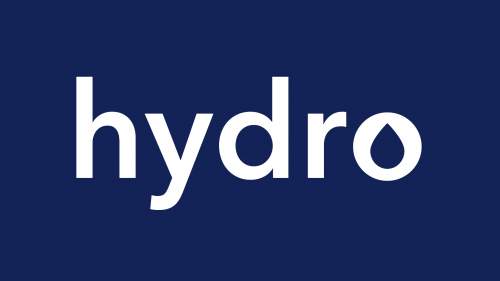 The next step in the development of payment applications will involve cryptocurrencies and HydroPay is one of them.

You can download the P2P payments app from Project Hydro on the Google Play store today and take a look around. It is still in the building phase but they are a very strong competitor! The role of cryptocurrency will be paramount in the next wave of mainstream adoption of FinTech applications as today's options are not very privacy preserving by any means.

HydroPay is part of the overall suite of decentralized applications (dApps) released by the Hydro Project team. The teams' overall goal is to create an open-source, decentralized ecosystem for the financial world - targeting businesses and individuals alike.

The suite of dApps is created on Smart Contracts through the Hydro Projects protocol which communicates with the Ethereum blockchain. The HydroPay dApp is their user-friendly P2P payments application - similar to Venmo - that will allow users to pay their friends and family in an easy manner that is fee-less and, most importantly, decentralized and private.

Their user interface is pretty slick which is not surprising considering that Project Hydro is already recognized as one of the leading development teams for FinTech platforms in the crypto space. 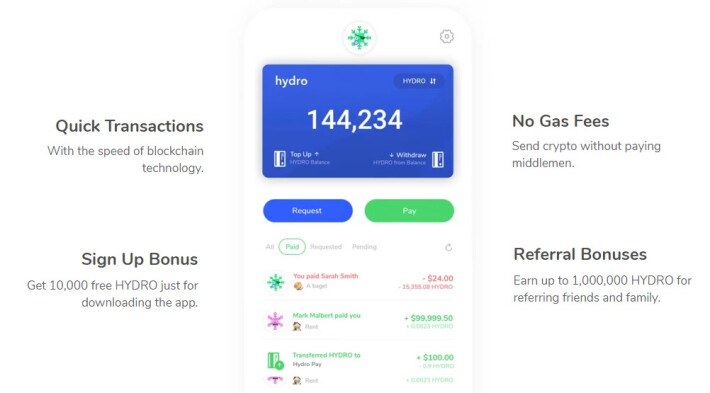 The important thing to highlight is that there are no gas fees at all - something that holds back many Ethereum dApps. So users will not be paying endless fees if they wish to make a significant amount of transactions.

Once the application is installed, the user will be presented with a very slick sign-up process for them to create an account. Just enter your Name, Email and Phone number to get things going and secure your account. 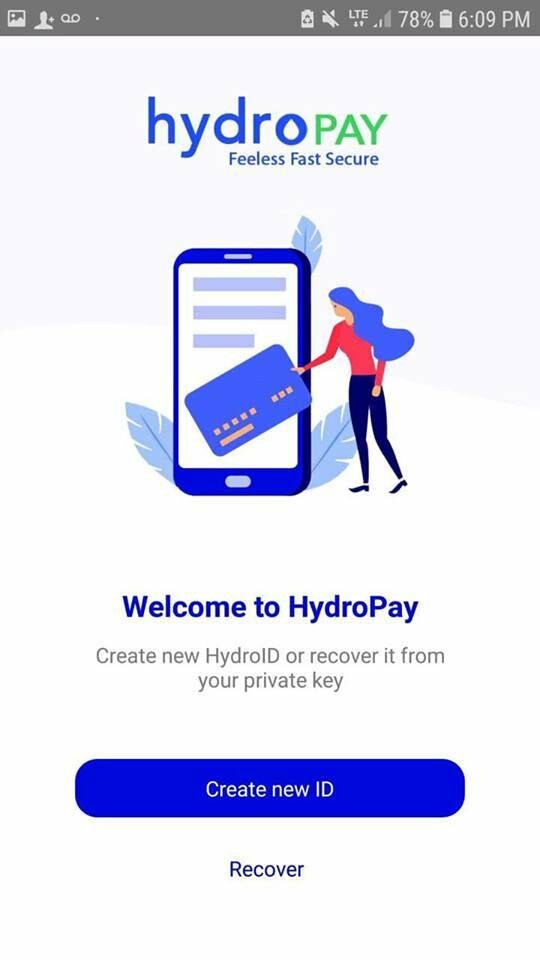 HydroPay truly is a rival competitor for Venmo. The most important feature is to remember that it is all blockchain-based and is completely decentralized. furthermore, it is privacy preserving so you don’t need to worry that you and your friends had lunch without poor Timmy last week!

It is also important to remember that, relative to Venmo, HydroPay is still in the early phases of development and is still in the BETA phase. The application only has around 5K+ downloads according to the Google Play Store but the dApp is already in a great usable state and is growing quickly with HYDRO-FIAT payments expected pretty soon!

The team at Hydro have truly created a product that can compete with both Venmo and PayPal - but more importantly - it is all private BY DEFAULT. Hydro actually care about our privacy which is why they do not include some dumb social feature that shows every payment sender and receiver as well as the comment assigned to transactions.

Furthermore, the impact of cryptocurrency in the FinTech revolution will certainly push the boundaries much further in what these applications are capable of whilst retaining individual privacy.