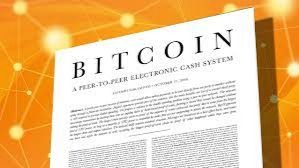 I Finally Read the Bitcoin Whitepaper

I'm not sure what took me so long to get around to it, but I've finally read the Bitcoin Whitepaper.  I thought it would be quite long and full of technology babble beyond my comprehension.  In fact, it was quite the opposite with the entire whitepaper is just nine pages long if you include the final page consisting of references.  It is almost elementary today, given the language and concepts those of us in crypto have become so familiar with.

The title reads, "Bitcoin: A Peer-to-Peer Electronic Cash System" and that is where it all starts.  The term "Cash" stood out to me because all these years later that seems to limit what the coin represents and all that has spawned since because of it.

The next thing you see is who it is written by, the infamous Satoshi Nakamoto.  We still don't know who the real Satoshi Nakamoto is, however, much speculation exists as to whom the pseudonym was really used for.  The one thing we do now is he obviously wanted to keep his anonymity which seems strange given the "look at me" culture that existed even back then.  What I didn't expect to see was an email address.  There it was, [email protected] - how interesting.  GMX is an email host that "ensures that your email and other data is safe at all times." Too bad he didn't include a phone number but perhaps I'll send him an email thanking him for what he has done for all of us.  Guess I shouldn't expect a reply.

What isn't listed is a date but the release date of the whitepaper was on October 31, 2008 and what a "treat" it was indeed.  The abstract that follows seems pretty straight-forward today, but back then it must have been quite extraordinary.  It reads as follows:

"A purely peer-to-peer version of electronic cash would allow online payments to be sent directly from one party to another without going through a
financial institution. Digital signatures provide part of the solution, but the main benefits are lost if a trusted third party is still required to prevent double-spending. We propose a solution to the double-spending problem using a peer-to-peer network. The network timestamps transactions by hashing them into an ongoing chain of hash-based proof-of-work, forming a record that cannot be changed without redoing the proof-of-work. The longest chain not only serves as proof of the sequence of events witnessed, but proof that it came from the largest pool of CPU power. As long as a majority of CPU power is controlled by nodes that are not cooperating to attack the network, they'll generate the longest chain and outpace attackers. The network itself requires minimal structure. Messages are broadcast on a best effort basis, and nodes can leave and rejoin the network at will, accepting the longest proof-of-work chain as proof of what happened while they were gone."

The abstract is a succinct and beautiful read.  This description may well apply to the whole whitepaper and I strongly encourage you to spend a few minutes to absorb it.  The first Bitcoin client wouldn't launch until January of 2009 and Satoshi would hand off Bitcoin to the community one year later but the masterpiece is the whitepaper itself.

The first two sections, Introduction and Transactions, review the issue with the financial institutions of the time which in the midst of the 2008 financial crisis. The period was set off by minuscule interest rates and loose lending standards which lead to a housing bubble in the US that spread globally. It was a system built on trust and that trust was threatened by a centralized banking system that failed its consumers. Transactions became increasingly expensive in the existing model and Satoshi set out to solve that with a peer-to-peer model using blockchain technology "based on cryptographic proof instead of trust."  His transaction model introduced and owner's public key and the ability to be able to see every transaction which would be stored in the blockchain and eliminating the potential to double spend.

The third section, Timestamp Server, was regarding a "hash" of a block being timestamped and widely published which he explained using a newspaper analogy.  This analogy dates the whitepaper perfectly.

In the fourth and fifth sections, Proof-of-Work and Network, is where the concept of mining emerged from.  Proof-of-Work was done based on Adam Back's Hashcash. The work was done using CPUs at the time, with GPU and ASIC mining future concepts that would render his original idea obsolete. This brilliant inclusion helped build the security in the system by introducing a "majority decision" element which eliminated the risks associated with proofing from a single IP address that could be easily hacked.  In the Network section, he introduces nodes who find the "longest chain to be the correct one and will keep working on extending it."  Section six, Incentive, provides the reasoning and structure for rewarding honest nodes for the CPU time and energy used to process transactions.  Think block rewards.

Because Satoshi envisioned the blockchain growing very long and with computer memory in 2008 not being where it is now, he proposed a solution in section seven, Reclaiming Disk Space.  This dealt with just keeping block headers and discarding the rest of the block to save space.  This would lead to section eight, Simplified Payment Verification, in which he explains how to "verify payments without running a full network node." Combining and Splitting Value is covered in section nine and deals with not having to deal with coins individually in the transaction blocks.

Section ten is labeled Privacy, a very important concept in digital money.  With the blockchain design, the public would be able to see how much one person was sending to another but without disclosing any personal information.  Your receiving wallet address might be visible, but not your name or other identifying data.

The final section before his conclusion was called Calculations, as you might guess this contained a number of formulas Satoshi used to build Bitcoin.  Much of this was devoted to fending off attackers from manipulating the "honest" chain.  Here he goes into probability for success for attackers, which of course he seriously limits based on his technologies design.

Satoshi ends the whitepaper with his conclusion:

"We have proposed a system for electronic transactions without relying on trust. We started with the usual framework of coins made from digital signatures, which provides strong control of ownership, but is incomplete without a way to prevent double-spending. To solve this, we proposed a peer-to-peer network using proof-of-work to record a public history of transactions that quickly becomes computationally impractical for an attacker to change if honest nodes control a majority of CPU power. The network is robust in its unstructured simplicity. Nodes work all at once with little coordination. They do not need to be identified, since messages are not routed to any particular place and only need to be delivered on a best effort basis. Nodes can leave and rejoin the network at will, accepting the proof-of-work chain as proof of what happened while they were gone. They vote with their CPU power, expressing their acceptance of valid blocks by working on extending them and rejecting invalid blocks by refusing to work on them. Any needed rules and incentives can be enforced with this consensus mechanism."

The Bitcoin Whitepaper is a must read for anyone in crypto.  I should have probably started here on day one, however I'm not sure I would have pulled much meaning from it then and a reread after being in crypto for awhile would have given everything so much more meaningful context.  Now that I can understand most of it, I'm quite honestly amazed at how he (or she) pulled together so many different concepts and combined them in what is the closest thing we have to perfect money. It created, after all, a revolution in the financial industry.