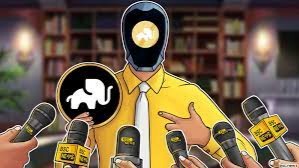 Elephant.Money suffered a major loss today with investors losing about 90% of their value in the platform in seconds.  The DeFi projects token on the Binance Smart Chain dropped suddenly and hard leaving those in the platform no time to take corrective action.  The platform was then paused but it was too late as the ELEPHANT token had fallen to $0.00000008.

The platform had been certified by Certik, where it has a security score of 77, and they turned to certification company to help them figure out exactly what happened.  While many investors immediately screamed "rug pull" it was more likely some form of an exploit that drained a significant amount of TVL and sent their native token into a nosedive.  The platforms twitter feed encouraged those on the platform to not sell their tokens, answer any direct messages and tried telling them that the money they had invested was safe.

It appears that one huge seller sank the price of ELEPHANT by selling a huge amount of coins.

The founder of the platform is Tony Perkins, better known as "Bank Teller", and has been heavily marketing the platform as of late.  The MIT graduate is a computer scientist who is also the Founder and CEO of Mako Labs and formerly served as VP of Web Architecture for Fidelity Investments, one of the largest investment companies in the world.

Elephant.Money's whitepaper proclaims "The Elephant.Money Network’s store of value token (BEP-20) on the Binance Smart Chain (BSC) that captures value by having the most fair distribution, an auto-balancing burn mechanism, and by providing a lifetime of frictionless, passive rewards. HODLers of ELEPHANT will receive passive rewards from simply holding the token in their wallet, as every transaction (buy, sell, and transfer) has a 10% fee; 5% which is distributed evenly to all existing token holders, and 5% is added towards locked liquidity. In addition, ELEPHANT is also used as partial redemption collateral for the TRUNK stablecoin, which is minted by providing Binance USD (BUSD)."

While I personally have not invested in Elephant.Money I have begun to invest in DeFi platforms that may appear to be Degen and will begin to discuss this journey starting tomorrow.  Stories like these may me wonder if DeFi can continue if investors cannot trust them.  It also supports the idea that regulation is needed in DeFi to help curtail these sorts of situations.