Ol Pajeta Conservancy is a great wildlife conservation story. It is a former cattle ranch converted to a wildlife sanctuary. They have a population of over 100 black rhinoceros, and the last two living northern white rhinoceros in existence.

In this post I will concentrate on the rhinos of Ol Pajeta, but in future posts I will share more photos from the park. 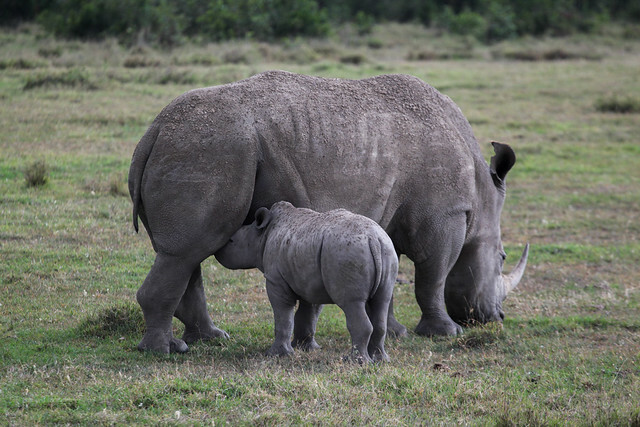 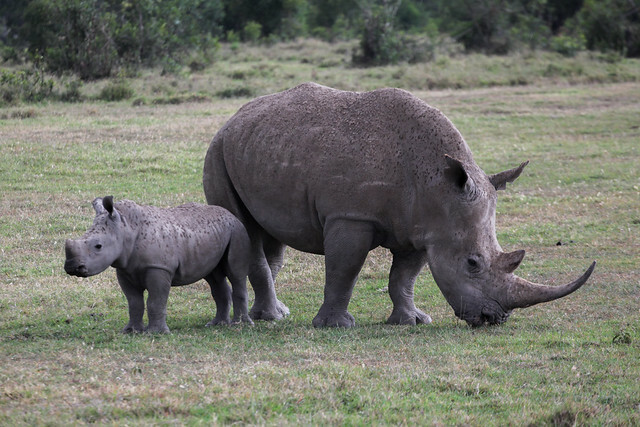 The mother has the longest and sharpest horn I've ever seen on a rhino. She could easily impale a predator or overly zealous tourist with that thing. Rhino horns are sought after by some Chinese for their purported medicinal properties, and by some Arab nations who carve them into dagger handles.

By the way, their horns are made of keratin, the same stuff human fingernails are made from. Seems like these Chinese would be better served popping a vitamin C tablet, and I've seen some splendid dagger handles carved from ebony. Just some suggestions. 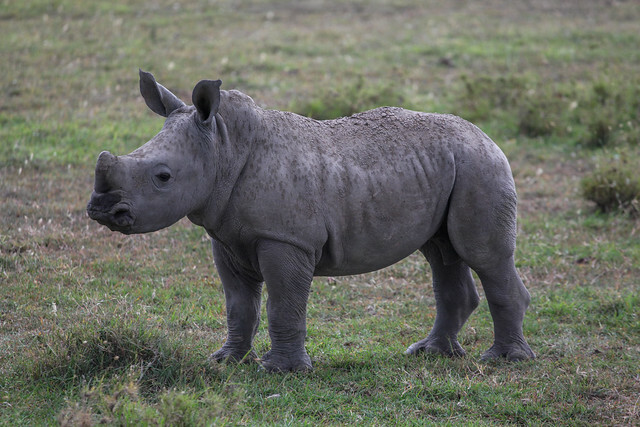 Baby portrait! It was raining when I shot these photos, so you can see the water spots on its back, which already has a coating of dried mud. Large hairless animals like rhinos, elephants, and buffalo coat themselves with mud to protect them against the sun and pests. 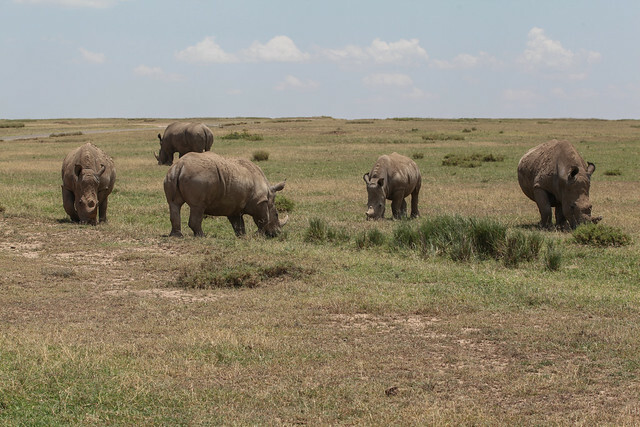 Of all the safaris I've been on, this one had the most rhinos just congregating about. I've read that they can be solitary animals, but you wouldn't know it after visiting Ol Pajeta. 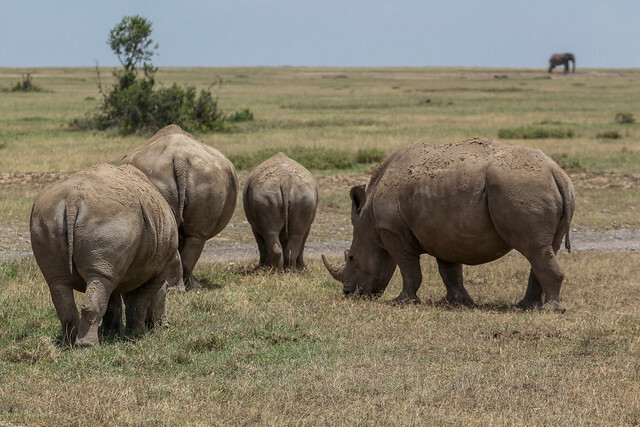 When you see annoying people in a safari jeep, don't go away mad, just go away! 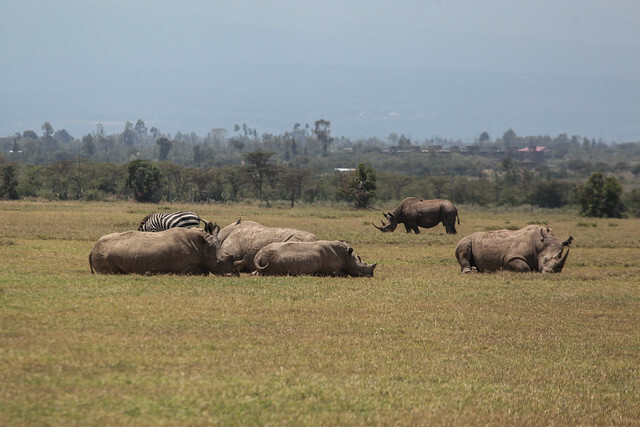 A group of rhino take a siesta, while a male rhino in the background patrols the area. 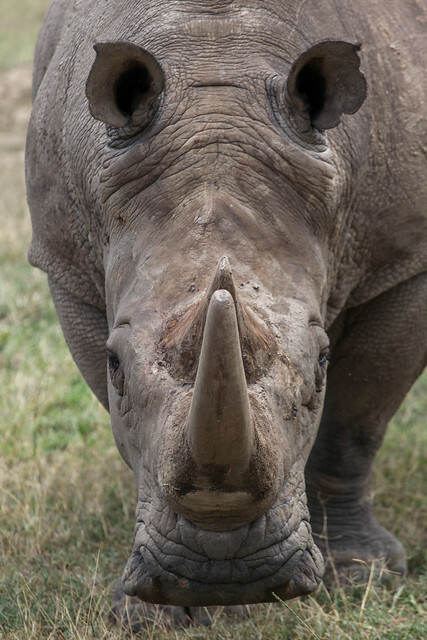 We passed pretty close to this guy, he grunted and angled his head down in warning. If there's one thing that can ruin your day, it's getting charged by an angry rhino. 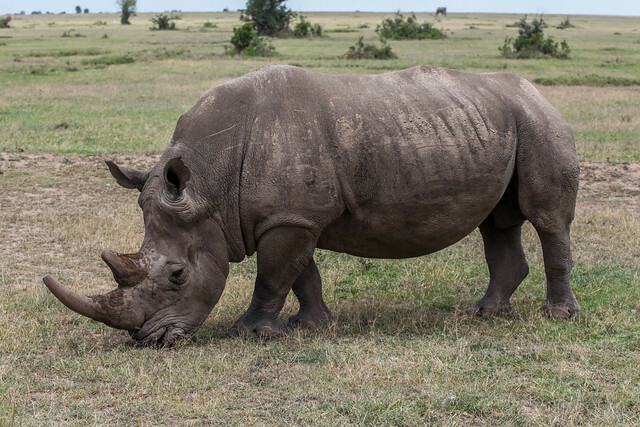 Here's a little black rhinoceros trivia. They are considered critically endangered but their population is increasing per the IUCN. An adult can reach 6 feet tall and weigh over 3000 pounds. The total population in the wild is around 5,000, compared to around 20,000 for the southern white rhinoceros. Ironically black and white rhinos are the exact same color, but you can tell a black rhino from a white rhino by the shape of their lips. Blacks have pointed lips, while whites have square lips. 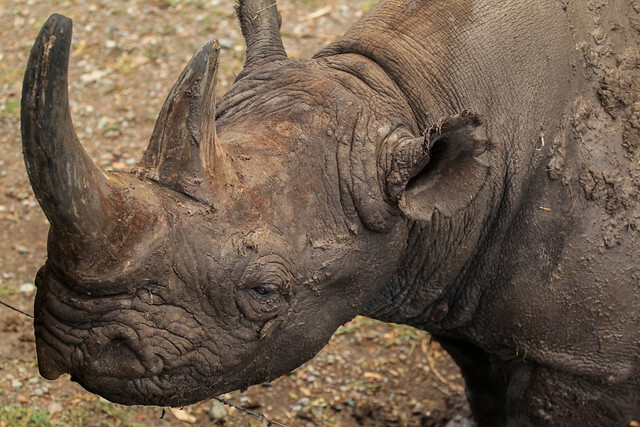 Please allow me to introduce to you Baraka. Some years ago, Baraka lost one eye in a fight. A time later, he lost sight in the other eye due to cataracts. He is now kept in his own personal pen, and acts as the park's rhino ambassador. Visitors can feed him by hand as well has pet him. I never thought I'd be able to touch a rhinoceros, but I was able to pat him on the head, grab his horn and say "good boy". Yes I entertained some delusions of having a pet rhino named spot. 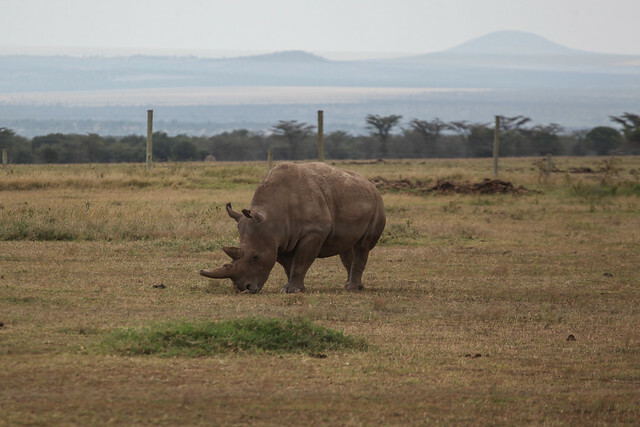 This is one of the two last northern white rhinos in existence. They are both females named Fatu and Najin. After it was determined white rhinos were extinct in the wild, four rhinos were brought to Ol Pajeta from Dvůr Králové Zoo in the Czech Republic. The two females were brought to Ol Pajeta, along with two males named Suni and Sudan, in hopes the conditions would be more favorable to mating. 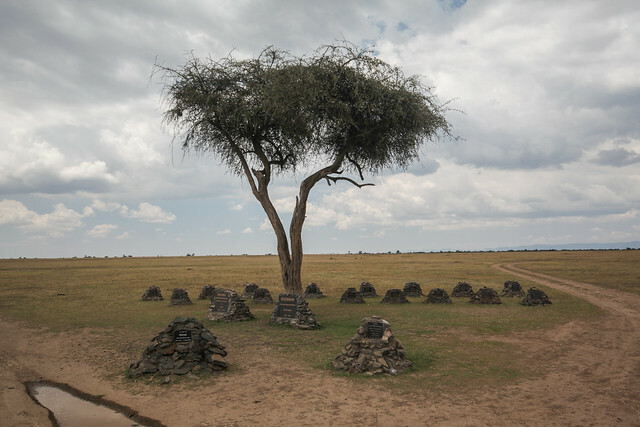 This is probably the saddest part of the whole trip, the rhino graveyard. There were so few rhinos left, the park would name them. When they die, they get a gravestone. 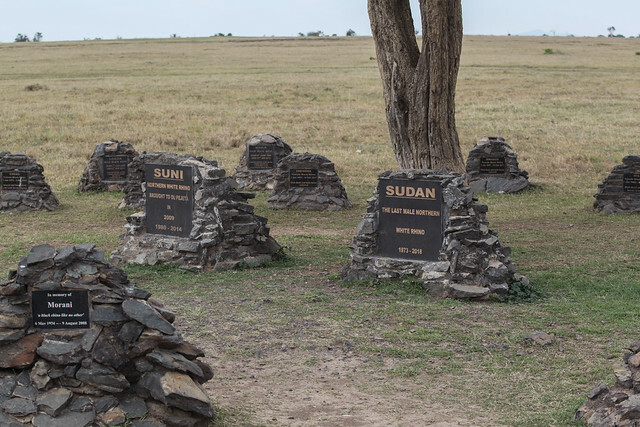 The graves of the last two male northern white rhinoceros, Suni and Sudan. Sudan was the last hope for these rhinos actively mating. He died in 2018. The good new is, they still have a chance. This year, eggs harvested from the females have been fertilized with previously frozen sperm from deceased males. Though extinct in the wild, the story of the northern white rhinoceros might not end with these two ladies.

If your interested in learning more or supporting efforts to save the northern white rhinoceros. Please watch the video below and consider donating via their website: https://donate.olpejetaconservancy.org/. Another great way so support their efforts is to go to Kenya and pay them a visit. Ol Pajeta has a great lodge you can stay at with a fabulous buffet.