Atop The Hudad Plateau, Ethiopia (Part 2) 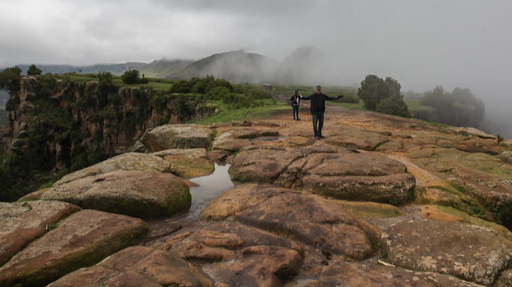 Atop The Hudad Plateau, Ethiopia (Part 2)

If you missed my previous post, Hiking To Hudad Plateau, Ethiopia (Part 1), please give that a visit before proceeding.

Once we reached the Hudad plateau, we had the opportunity for some well-deserved rest. This included some fasting-friendly lunch, consisting of rice mixed with vegetables, and cheese-less pizza. We washed it down with a local drink made from honey. Our hike was during many fasting periods observed by the Ethiopian Orthodox Church. Since I like to observe local customs for the most part, I declined their offer to bring me some fried chicken.

The plateau was really like two plateaus, connected via a narrow ribbon of rock. Crossing what amounts to a bridge of rock, with certain death on either side of you, made for some elevated blood pressure to say the least.

The plateau had lush vegetation, plenty of birds, and a few smaller mammals. I'd love to return during the dry season, and actually stay in the lodge. 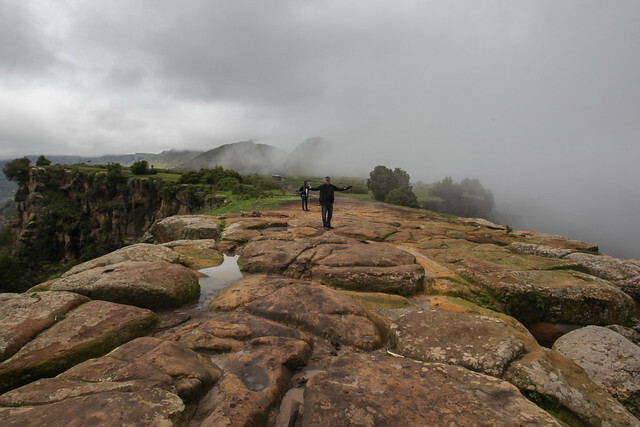 1: This photo was taken after we emerged from crossing from one plateau to the other. In some places, where we crossed was only a meter wide, so I handed my camera to my nimble guide to carry. This is me both celebrating and signaling that I wanted my camera back. 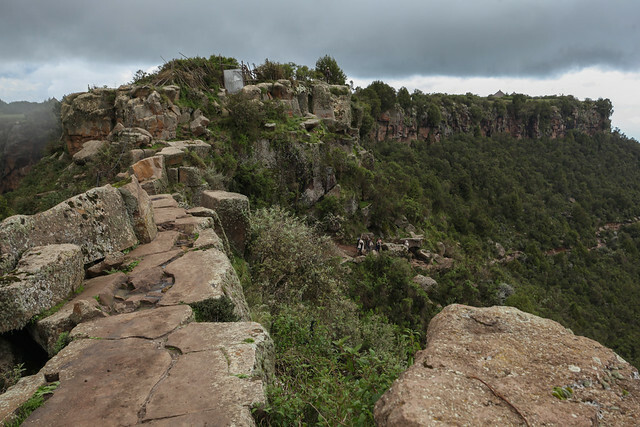 2: Here you can see the actual rock path between the plateaus, and you can get an idea of what the drop-off was like. The rocks that formed the path were relatively flat, but you periodically had to squeeze by an imposing boulder. The path offered a single entry point to either plateau, with sheer drop-offs on all other sides. 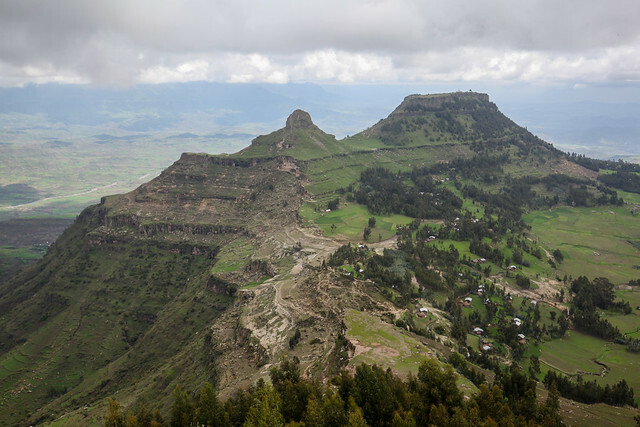 3: The day was very hazy and overcast, but occasionally it would clear just enough to experience the gorgeous landscape. 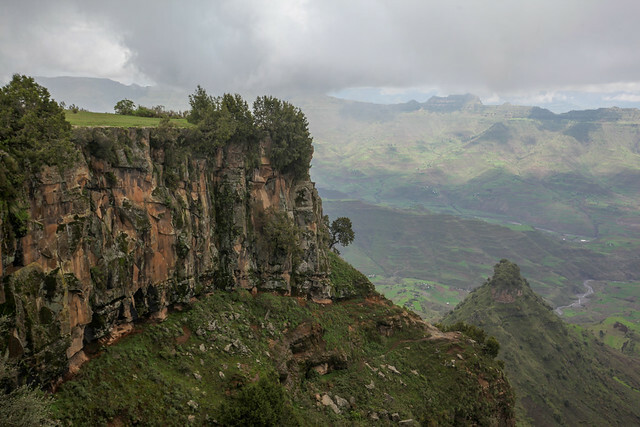 4: The plateau's erratic shape allowed me to capture what the typical drop-off from the plateau was like. I didn't venture too close to the edge, some of the rock looked sketchy! 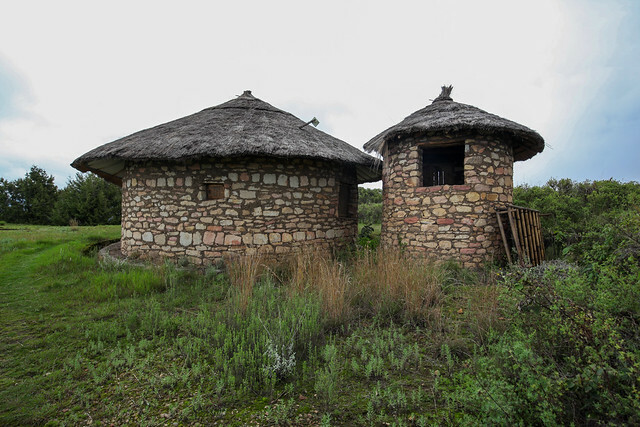 5: One of the plateaus had a lodge built on it made from stones quarried on the plateau. Since it was the rainy season, no guests were present. There was only a security guard armed with a rusty rifle to greet us. 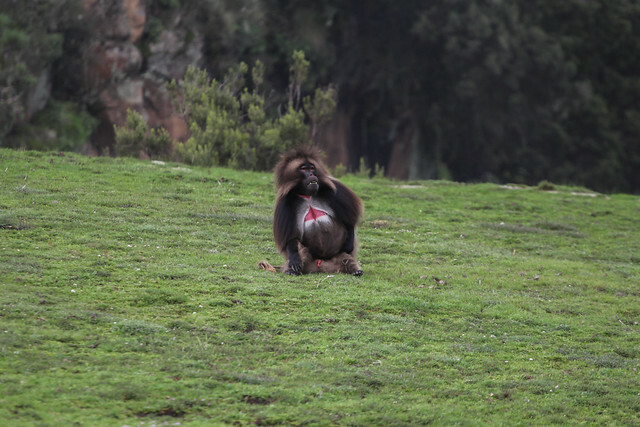 6: One of the resident Geladas, also called bleeding heart monkeys. Although they look very similar to baboons, biologists have determined that they are not baboons. 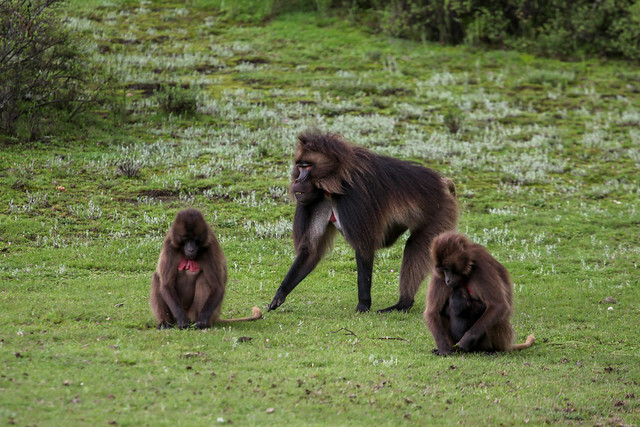 7: The males are twice the size of the females, and are so much more imposing to look at. Their fur coats are distinctive, it's almost like he's wearing a cape. 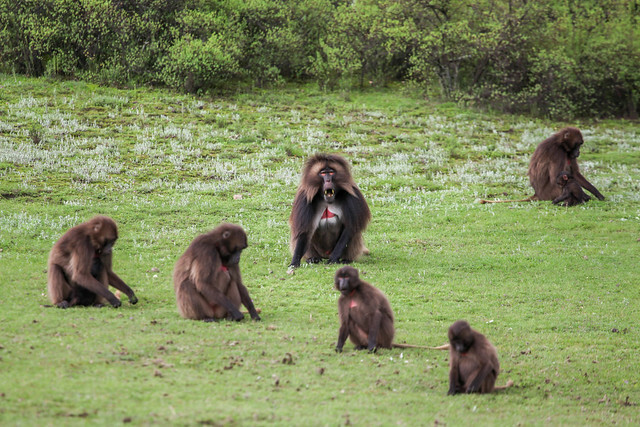 8: Here I got a little too close, and the leader decided to give me a warning by grunting and baring his teeth. Since being mauled by a monkey is not on my bucket list, I decided to respect his wishes. 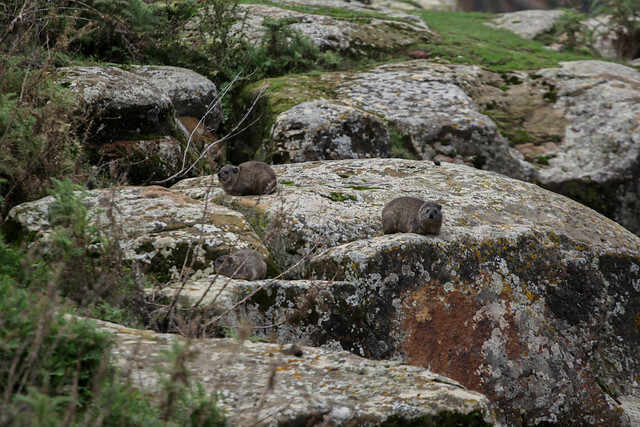 9: These cute little guys are yellow-spotted rock hyrax. They are a small mammal that live in the rocky outcroppings, and feed on vegetation. 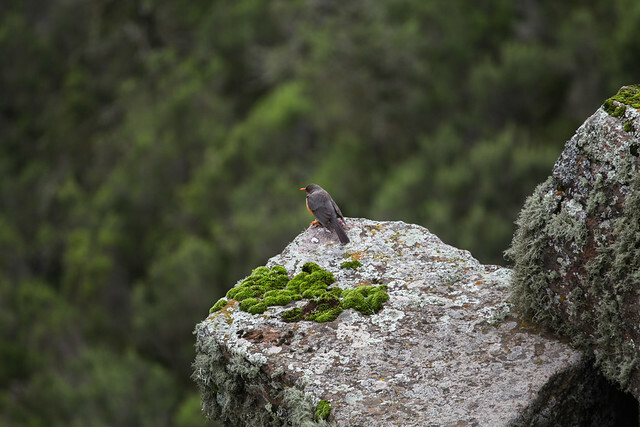 10: This little orange-beaked bird perched on an outcropping of rock, is called an Abyssinian thrush. He didn't seem the least bit concerned with my presence.