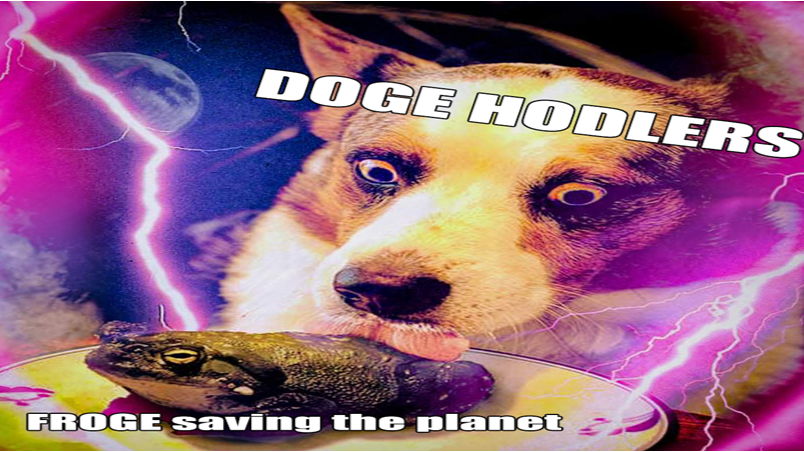 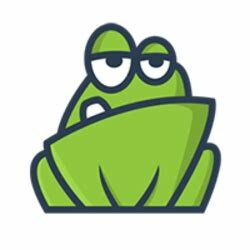 In about the last month since launch, the price of this coin has increased 379%. Of course, that would make you think it's time to sell. As seen below from the pie chart available in real time at FROGE's dashboard website which is very cool (here: https://www.frogedashboard.app/), the top 20 holders account for less than 20% of the overall coins being held, and each of them has less than a 2% stake, with the biggest whale holding 1.53% of coins in circulation. 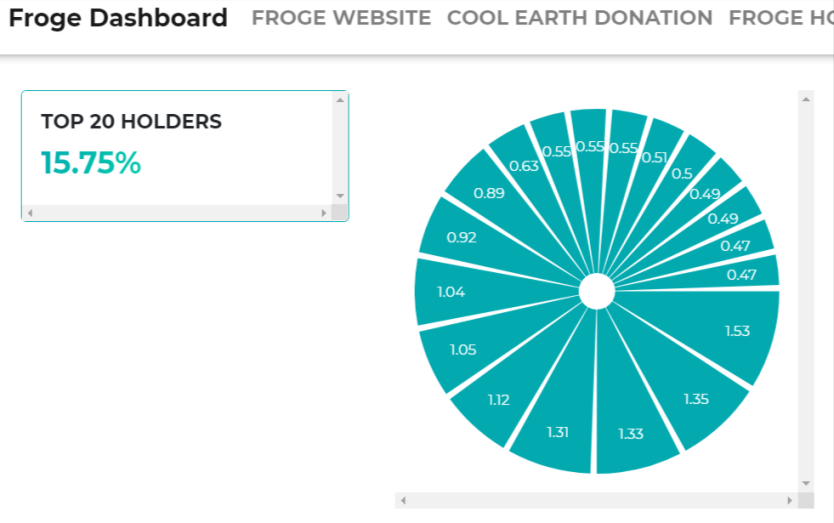 FROGE is relatively active across social media platforms. They have a page on REDDIT here https://www.reddit.com/r/FrogeFinance/ and have around 415 followers. Today, there was a post from a self-entitled "FROGE Whale" (in the bold text below). The Whale indicates that they hold more than 1% of the coins, so, the holder is one of the seven the largest of the 20 whales in the pie chart above. I really liked the tone of the message from the whale. Here's a direct link to that post https://www.reddit.com/r/FrogeFinance/comments/n562xe/hey_there_stranger/ and I've pasted the message below:

I am a FROGE whale.

and I'm not selling.

Dispel your ideas regarding shit coins, pump and dumps and rug pulls. This is not FROGE.

What we have here can genuinely change the planet for the better... if we work together.

Right now 0.1% of all transactions are going into the wallet of Cool Earth. A charity involved with the preservation of vulnerable forest. That's awesome right?

Imagine a world where the market cap of FROGE far exceeds the current value. In this imaginary world we would be listed on large exchanges and getting actively traded like a BTC, ETH or DOGE.

Just stop and think. Try to comprehend the power that we'd have as a community to make positive changes around the world.

We can all agree that there is a lot of bad things occurring everywhere. Let's take the outbreak of COVID19 in India as an example.

The developer team could hold a vote on their website to see what the community wanted to sponsor for that week.

This week as a community we could have voted to donate to a charity that provided emergency oxygen to people with COVID19 in India.

1% of transaction for the week period go to the charity responsible for providing oxygen. We could send millions of dollars through the power of working together.

The charity could change week by week.

I am not suggesting we take from Cool Earth, just suggesting that we could sacrifice a little extra to do a lot more.

Obviously everyone here is interested in making a profit. I can comfortably say that there is enough room for FROGE to grow over 100x in value.

I think we can all agree that the holy grail of any new coin is to be listed on Binance. This would open the flood gates to liquidity within this space. Unfortunately it's super expensive to get listed on Binance and the dev's will never be able to afford this on their own.

I wouldn't be against the dev's using a percentage of the transactions to go towards a 'get listed on binance fund'. Maybe some of you here would agree?

Spread the news of FROGE, the first eco-crypto coin on the planet. Watch us go viral.

In the subs please attempt professionalism in your messages. Try not to ask questions about FROGE pumping etc. it doesn't look good to potential investors.

Let's just try and work towards something pure and clean.

You'll be hearing more from me.

Seems like a good post from the whale. I think you'll see more with this view emerge forFROGE.

Personally, I think FROGE has a real chance to make a difference. For example, look at the estimated amount of the donation going to help the environment and save rainforests in the screenshot below, more than $100,000 USD. (from the dashboard website here: https://www.frogedashboard.app/ )

The dashboard really makes this fun to watch. For example, look at the stats below updated in real-time or on the daily from the dashboard 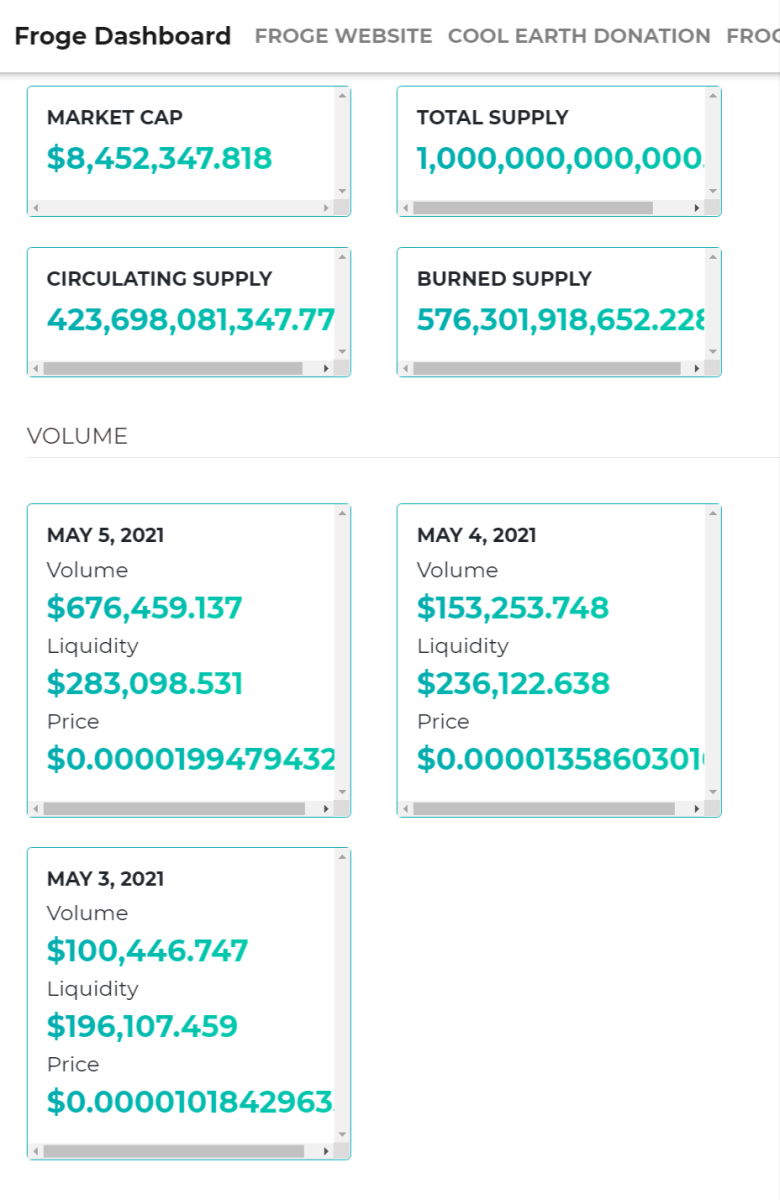 In a post last night on PublishOx (here: FROGE Coin, an interesting token) I gave some more details on the FROGE website and so forth, where there are easy-to-follow instructions on how to buy. A pro tip here if you are going to buy, once you transact in Uniswap, increase the slippage in advanced settings - I changed my level to 2.5% and got my order filled very fast. However, it appears liquidity might be tough to get at this moment because traders seem to be HODLingandnot selling. Comment below if you give it a try or have more questions on how to buy.

One thing I have really enjoyed since taking a position has been getting more coins for just HODLing. Namely, as mentioned above, 1% of each buy and sell of a coin number gets redistributed equally among holders. So for example, if someone buys 200,000 coins, 2,000 coins would be split among all holders. If there were about 2000 holders, each would get 1 coin. Small, but in less than 24 hours I've watched my wallet accumulate more coins, and that feels great. Added to helping the environment, and having a chance to make a good investment early on FROGE Coin, I am very bullish. 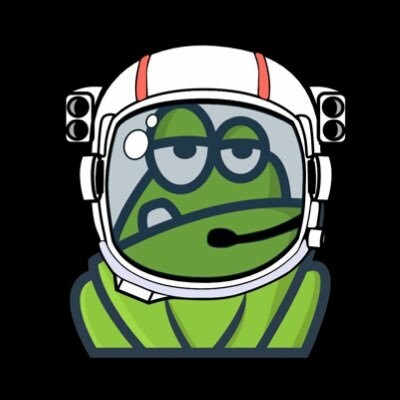 Good luck out there and may all your days be green.