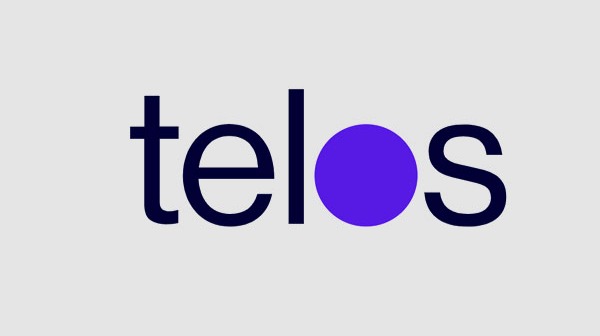 Going back to Thanksgiving dinner, Telos investors were thrilled as price rallied from $0.75 to $1.16 during the Holiday week. As we discussed in our last meeting, Telos had completed it's retrace and was preparing to start a new market cycle. That cycle started, as expected, with a bang, a $0.42 move from $0.74: 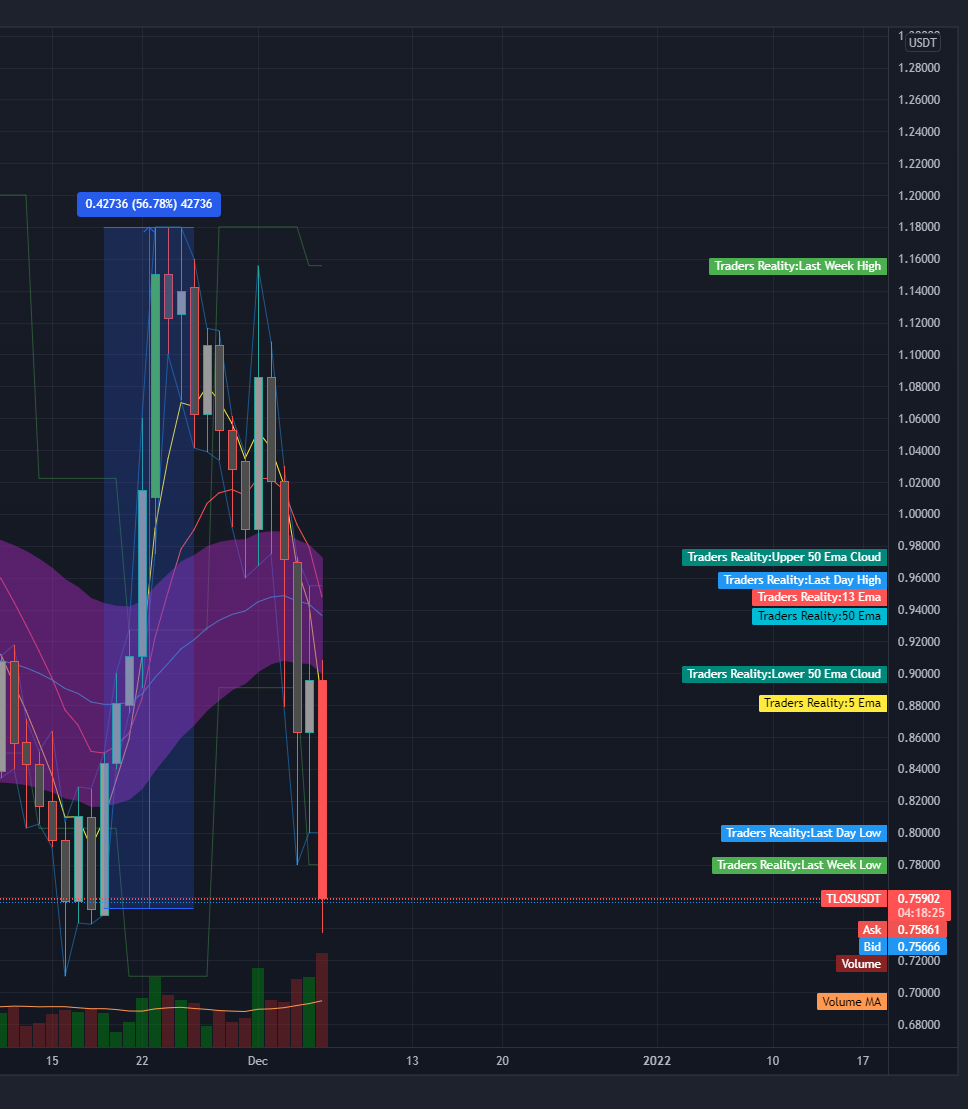 And then Thanksgiving dinner was finished and the after glow just did not last. The next day we learned of the Omicron variant and the news sent markets into a bit of panic. Suddenly, the crypto market was faced with three strong macro headwinds.

First, we have the Fed tapering which should naturally cause a correction in speculative assets. Using Bitcoin price as a sort of focal point, the worst case scenario would send Bitcoin down to ~$10,000. However, that would mean that Bitcoin would have to breakdown through some very strong support levels, particularly around $42k and then even more so at $30k. With BTC ranging between $47,200 and $49,500 today it is difficult to imagine Bitcoin falling to about 20% of its current value over the next few weeks. But here we are and it would not be the first 80% down day in Bitcoin's history? And what would that mean for alts? 90-95% loss of value? This reminds us of that wisdom that that which rallies like a rocket will retrace like a waterfall... proven time and time again.

Second, it is the holiday season and the crypto markets have printed an incredible year. Including the bloody red mess that we call last week, Bitcoin is still up over 60% this year and folks are going to book profits ahead of the holidays. Of course, this means that there are some retail folks who are spending their hard-earned money on Christmas gifts for others instead of buying cryptocurrencies right now. Others will go a step further and book profits. I mean, that's why we all got into this game after all... Anyway, the reduced buying pressure and increased selling pressure almost always leads to market downturns. And here we are.

The last macro headwind we face is the unknown amount of damage that the COVID-19 Omicron variant will cause. While early returns suggest that the variant is more contagious but less severe than the Delta variant it is still too early to speculate on the scope of the impact the new variant will have. Omicron is just now making its way around the United States and around the world. If countries react as they did in 2020, that is to shut down their economies and cause further disruption to supply and demand cycles as well as the supply chain itself, we should expect the crypto market woes to be as severe. The severity of the impact to crypto price will be determined by how the world reacts to this new variant. If we soldier ahead and work hard to ensure that Omicron is no more than an obstacle and a hiccup on the way back to a full economy, the impact to crypto price should be minimized. We just don't know, otherwise we would all go short on Bitcoin and be done with it!

Back to the matter at hand: analyzing TLOS price behaviors. Today's 15% drop printed a red vector candle on the daily chart entirely below the 50-day EMA cloud: 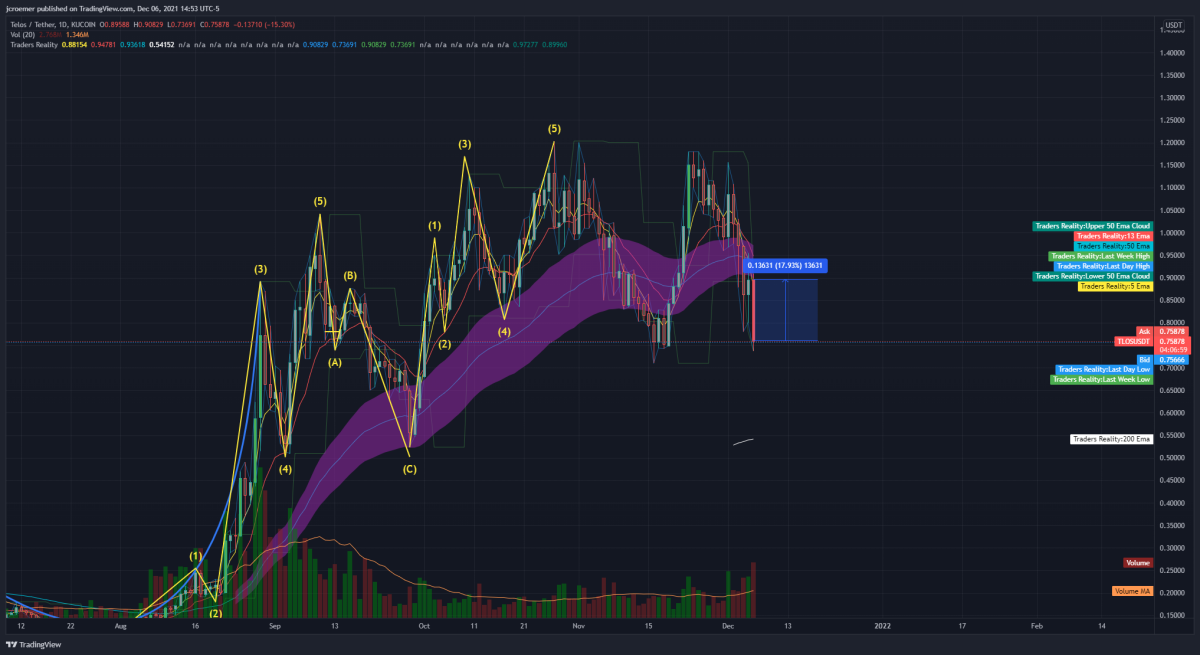 If I was a financial advisor, which I am not, and I gave financial advice, which I do not, and the three aforementioned macro headwinds did not exist, I'd be singing from the rooftop that you should be buying TLOS right here, that this is the golden entry. It's not... but it is a damn fine price, all things considered.

We know that sooner or later the market will retrace through that vector candle and recover to above $0.90. We don't know when and, all things considered, it's tricky to predict. However, we know that we have support around $0.75: 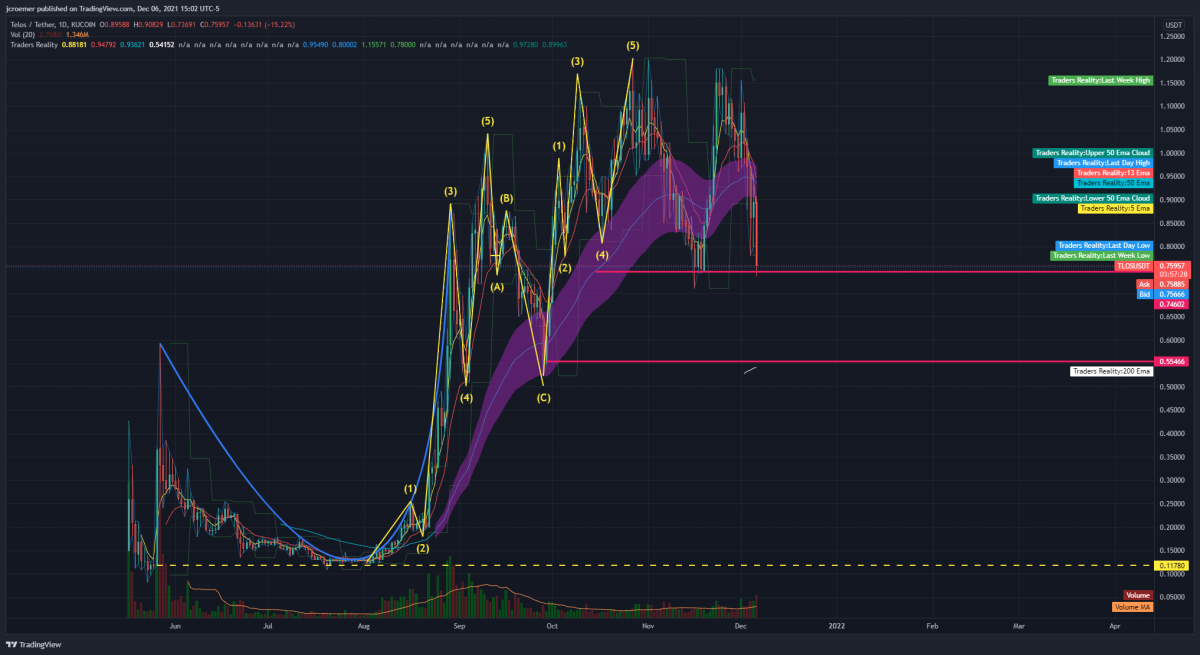 Should we lose support at $0.75, price will break towards $0.54, our support line from September, and is also about our 200-day EMA at this point. You can see the white line on the chart that represents the 200-day EMA. It's so short because TLOS just started trading on KuCoin in May 2021 and the chart is the KuCoin market. Assuming that we bounce on the $0.75 support line, the action between $0.75 and $0.90 will provide guidance on where price will go next. Should the TLOS price break-down continue, the next zone down is between $0.443 and $0.774 where TLOS printed back-to-back vector candles in August as it first broke out: 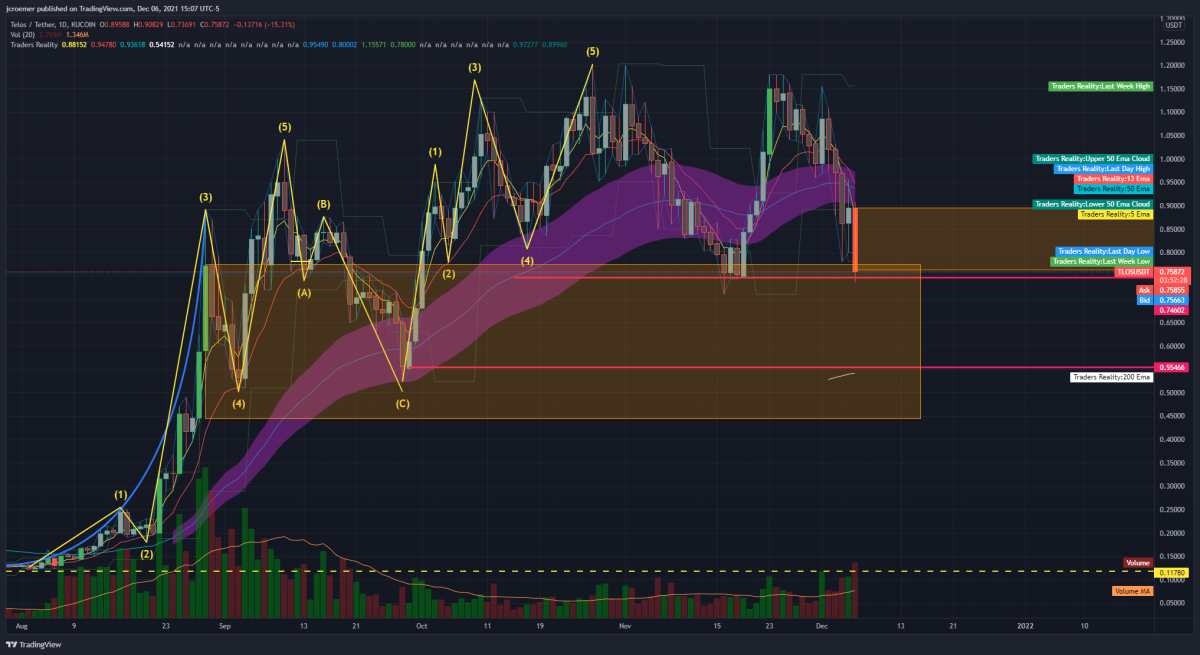 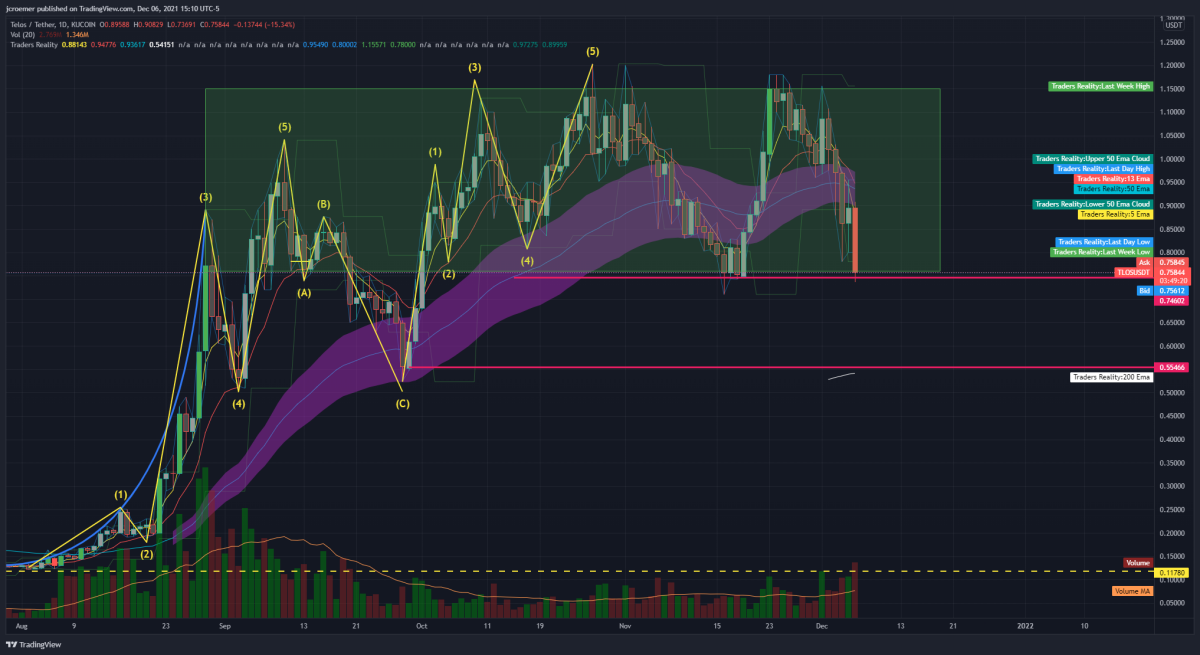 Considering the head winds and considering the broader market action, it seems to be that market makers will want to test price between .50 and .75 to create higher volumes in that range before taking price back up. The other option would be to move price above the zone and test new highs, but, here again, consider the headwinds.

Let's pull back and look at the daily chart with the Fibonacci retrace tool overlay and see where we are: 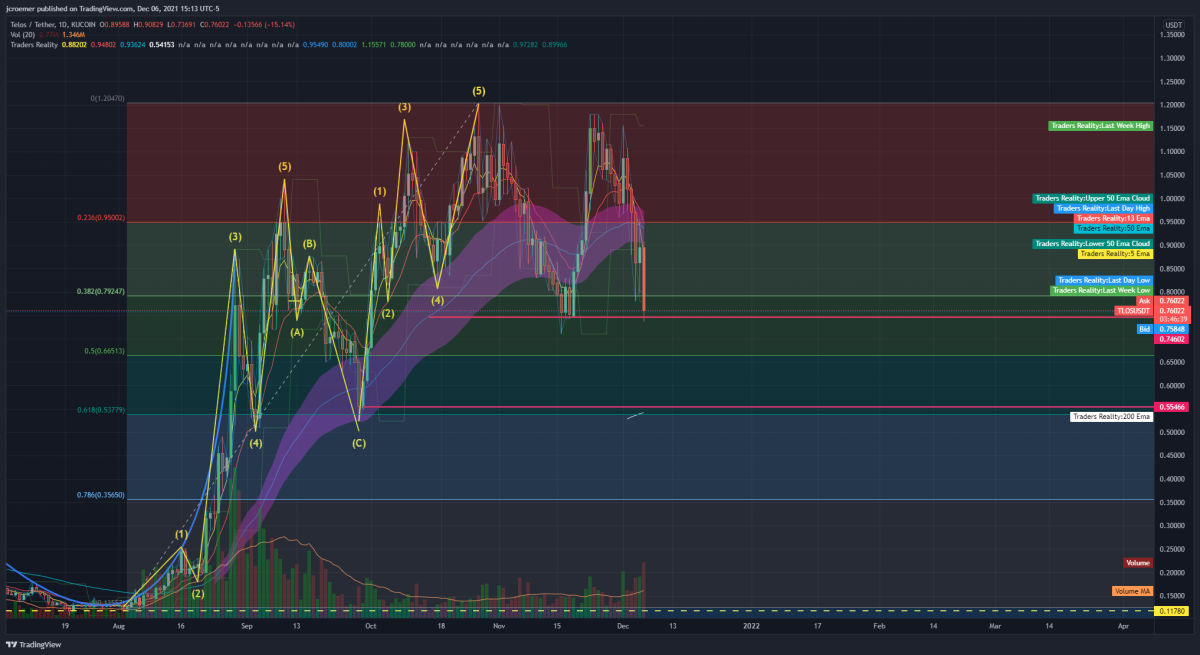 I want you to take note of the fact that, long-term, TLOS has yet to approach the .5 Fib at ~$0.665, however, it's not yet tomorrow either. Regardless, it is difficult to refer to price entering a bear market when the numbers just do not support the idea. But, on the other hand, all things considered, a test of $0.665 would reveal the market's intentions for the short-term. Should TLOS bounce up and away from $0.665, it would be indicative of strong bull sentiment in the market. However, failure to hold at the .5 Fib could indicate we are entering a bear market on TLOS. Bears will look for a further break down below the .618 Fib at ~$0.537, where support would then flip to resistance.

Before we consider a test of the .5 Fibonacci line, we'll look to see how the market reacts to the current test of $0.75, if we flip $0.75 from support to resistance, it will likely prove as difficult to overcome as it served as a solid level of support for quite some time now.

The big picture is that extreme volatility is the new normal for now. Since Nov 1, we have seen price range $0.48 on what's now a $0.76 coin or about 41%. The market never did like to make it easy on traders.

I would like to share a Telos marketing graphic that is making its way around the internet right now because it's a big picture idea. You know, it's so easy to lose perspective on the big picture when you are staring at a big red vector candle right before a holiday. So, if you are involved in TLOS or looking to take a position in TLOS, here is some food for thought: 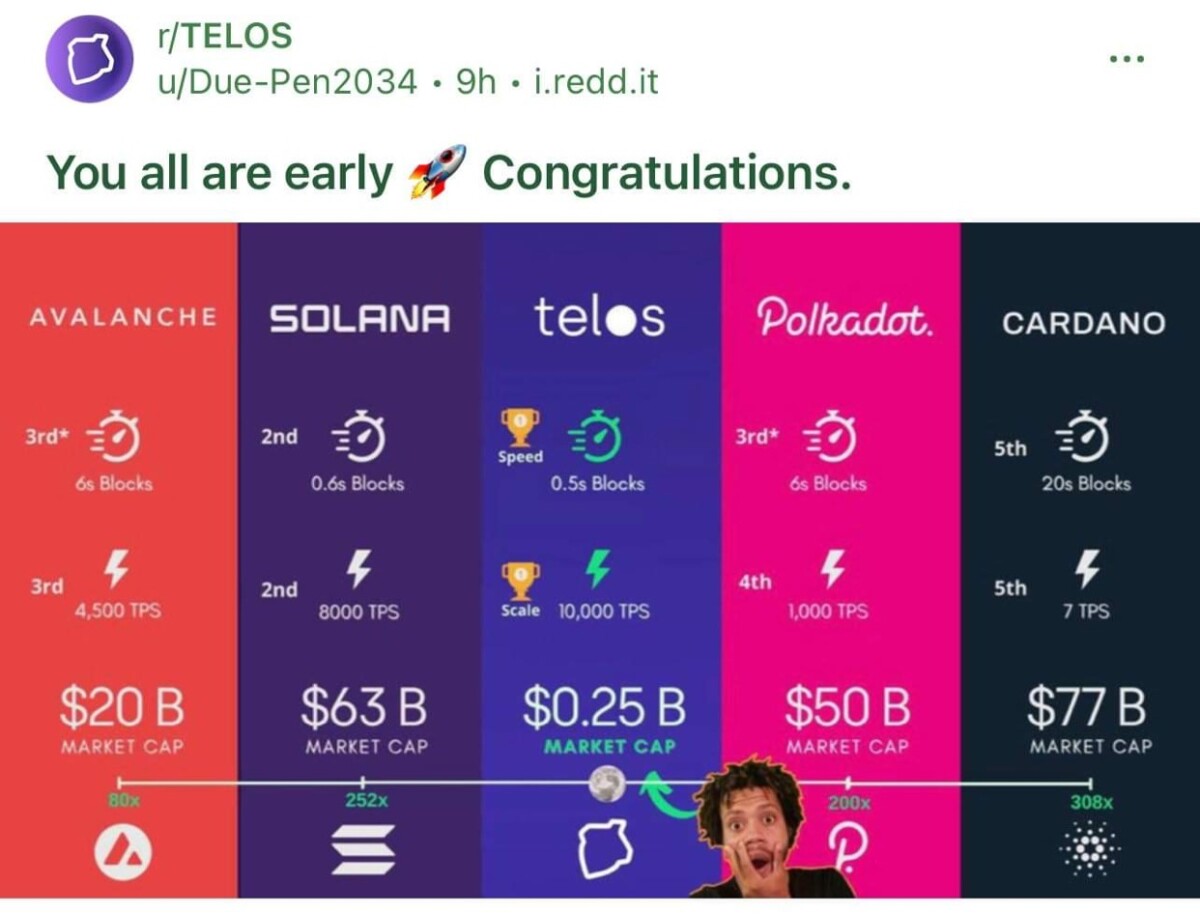 Good luck out there and be safe! Happy trading!