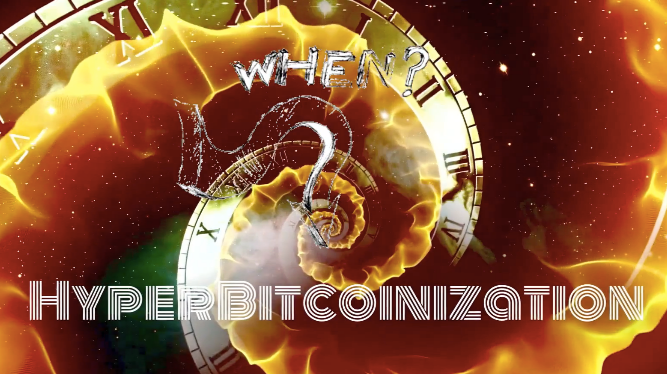 Sign up at Odysee to Earn LBRY crypto for watching videos:

I also make short form videos and memes on TikTok :)

The centuries worth of history under the monetary rule of Nation-State currencies, creating the multitude of domino effect externalities and distortions that it has, may soon be coming to an end. In Ray Dalio's "...Changing World Order" the time of transition within the approximately 100 year cycles between Nation-State currencies, is typically 10-20 years as the former dominant issuer phases into a "decline" stage while the issuer of a new Global Reserve Standard progresses in "the rise." What if the next transition is a peaceful one and if the exponential growth rates we can expect from technology makes that transition phase much more rapid this time. 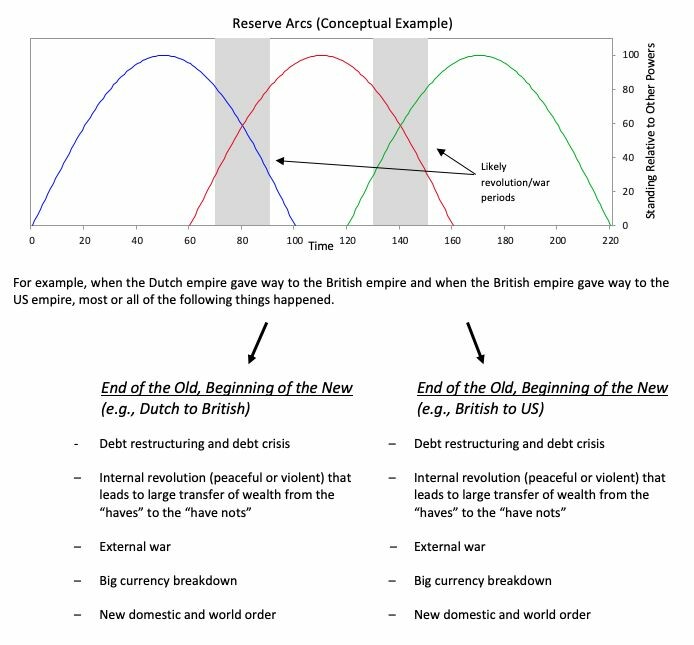 Jeff Booth breaks down the exponential rate of compounding growth in "Price of Tomorrow". A different kind of cycles are implied, through the discussion of Game Theory and computer simulated results. Strategies in scenarios to cooperate or exploit, using Nations to illustrate, if all cooperate, and rid of all weapons, until it becomes lucrative to exploit, setting in mistrust, until peace is again maintained via cooperation against the exploiter, until it becomes more lucrative to exploit. This continuous flux of hard times creating strong men to good times creating weak men, is driven in human terms of the game, by competition for scarce resources.

He diagnoses social degradation to the manipulated monetary system and how implications of such an environment have the potential for central authorities in general, to use the power of technology against the people instead of, for. Booth explains the singularity theory of Artificial Intelligence surpassing humans data processing to God-like sentience. Though AI is already restructuring society with deep-learning algorithms that serve our objectives, changing the way society functions, such power holds the potential for exploitation by centralized forces. China's social scoring system and surveillance infrastructure is a clear example of governmental bodies using AI as a tool for such control.

Rather than choosing an imposed instrument subject to inflation and tooled for control, while adapting to the inflating world of diminishing currency valuation, Booth advocates for allowing deflation to bring down the costs of everything making it easier overall simply to exist and live meaningful lives. Consider that a computer in 1970 costing over $4million, by 2007, was down to an average of $550. Technology is inherently deflationary and living in a technological era, we should embrace it and the creative destruction that will follow, cleaning the distortions from the marketplace as a more pristine and sound tool of value exchange ripples more clear signals to participants of the Bitcoin open source base layer network, with the integrity of unchangeable rules. Abundance would be free to empower humanity as a whole opposed to the rulers delegating monetary control over the market representation of our very time and labor. 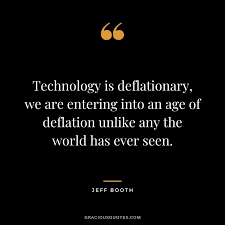 With Bitcoin technology providing protection of personal property rights for individuals on mass scale, the market can do nothing else but shift towards honest signaling until truth eventually reaches mainstream penetration. "Hyperbitcoinization" by Daniel Krawisz on the Nakamoto Institute website, spells out the capital controls of all fiat currencies leading eventually to hyperinflation. As the inflation kicks in, the controls have less and less impact leading to governments inflating even more. Though people have become habituated to rising prices, many will seek an escape from the spiral to currency collapse. Bitcoin, as a borderless option, becomes the most accessible and sound, allowing an escape route for those who find it. As each government currency eventually collapses, Bitcoin will be the one store-of-value available to all. The article highlights two factors of Hyperbitcoinization as the yang to the yin of Hyperinflation. 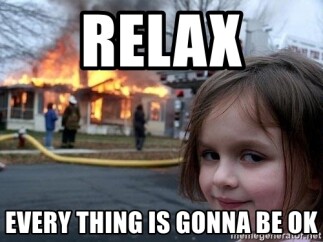 Pretty much, once all the middle men, usurping great value, are effectively cut out from monetary transactions, that value will be re-distributed more honestly throughout societies according to the local rate of adoption, displacing the layers weighed down with counterparty risks and excessive overhead costs of operating under  the legacy system.

The layer of protection that Bitcoin provides for the individual, extracts government authority, via each Nation's declared currency, from our monetary exchange system, breaking the forces of manipulation. A world on the Bitcoin Standard will operate much differently than it has during the old Nation-State paradigm. Insight into the need that spurs such revolutionary change to occur, helps to understand the emerging transition from rulers (ie. central banking authorities and the government issuers) to rules or protocols (ie. Technology gateways written in code) to perform the function of transmitting the value flows of society without the favoritism or authoritarian controls corrupting the integrity and value of every Nation's fiat currency. 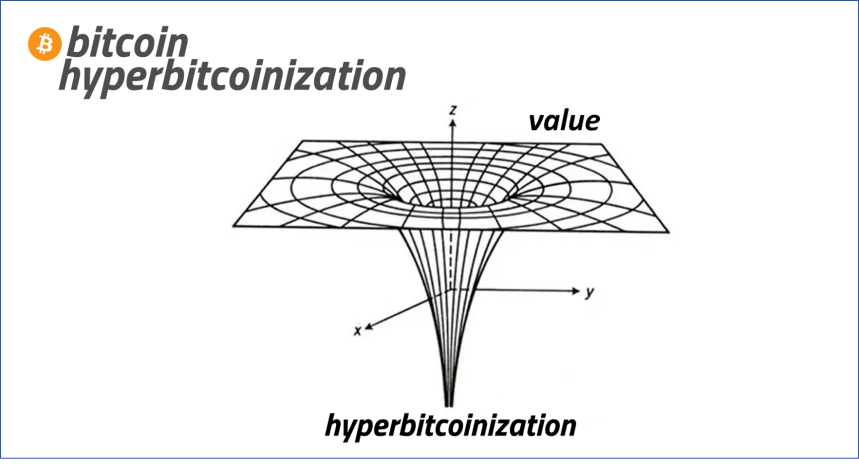 This innovation is taking hold from the bottom up opposed to top down, giving the average citizen, normie and pleb, a chance to front-run the institutions waiting for regulation, at the least a spot ETF, and the governments, that don't understand it yet, holding them back from their competition.

Grasping that the pendulum is swinging, speculations abound. Is a $1million Bitcoin the market share price signaling the effective transition to a new global reserve, held most widely among market participants, into the open source monetary system signaling truth and acting as an integral guide to the exchange of value within a network linked in terms of value to everything in the world.

With the rate of exponential growth, my prediction by instinct, speculation, and cycle timing is some time in 2026. With insight from numerology, 2026 = 1, attributable to a beginning and birth. The time of Hyperbitcoinization and official global transition into the Bitcoin Standard may come sooner or later, either way, time is limited to stack sats while they're cheap!   Once Hyperbitcoinization happens, we'll never understand how people were duped into the old system for so long.

- TedEd YouTube  "Exponential Growth: How Folding Paper Can Get You to the Moon"

- Jeff Booth "The Price of Tomorrow"

- RealLifeLore  "What Life Under China's Social Credit System Could Be Like"