1/ “ #Bitcoin fixes this”  a long sung mantra of Bitcoiners’, is somehow an always fitting response to the multitude of infractions that columns and tweets outrage against. In an attempt to best sum up the validity behind the truth that rings through it, simply a rushed shorthand of a monetary system on a #Bitcoin opposed to #Fiat standard rings loud and clear.

In “The Fiat Standard” Saifedean Ammous unravels the central banking structures’ facilitation of government backed currencies. The imposed system creates economic swings of debt-cycles, from expansion to contraction, by markets mis-interpreting credit for capital, along with the effects of controlling measures such as imposing interest rates, reproduction and other debasing infringements that distort market signals drastically. These distortions corrupt incentives in every corridor of value flow through our institutions, from government, media, education, science, health, of our companies, families, individuals. The domino effect begins with government lending using paper printed authority established by decree, to purchase consent from media, incentivizing scientific research and capitalist production in those specified areas of funding interests, influencing education facilities to direct learning towards those objectives, leading to unintended consequences such as increasing food production while decreasing nutritional value, trickling all the way down to each individual. The repercussions of the institutional corruption inherent of a fiat standard, leads to a high time preference in society because spending is incentivized to exchange a currency that will be less valuable over time, for tangible goods or other store of value asset today, that might appreciate, or at least depreciate less, than the declining value of a fiat currency.

In the “Masters and Slaves of Money”, Robert Breedlove spells out the history of Nation-State currencies as money monopolies corrupting the controlled exchange unit as a tool of theft, allowing a class to steal time through their currency, by forcing participants into imposed enslavement via corrupting mechanisms tooled into the issued supply. The insight is gained by building up from freedom of the individual as the principle of morality, with the most intrinsic ownership of our personal bodies through birth. Thus our choice and sovereignty is ethically instilled by our mere existence, and should not be oppressed, if expressed with no imposition to the freedom of another. The freedom of choice, entitled above all, to all, should be freely expressed and unrestrained in the marketplace, to convey the honest needs and desires of market participants signaling competition to satisfy the needs of reality. Hindering individual freedom of market participants thus corrupts a truly free market.

Fiat currency begins as an un-truth, a deliberate lie, corrupting market truths while robbing the time of participants creating masters and slaves. Masters are the monopolists of money that print, tax, and create inflation and other ways of skimming supply continually debasing currency value. Free-markets choose the medium of trade, which in offering the convenience and confidence of value that Nation-State currencies have provided, even by pecking order force, are only capable of holding that rule for so long; or so history has shown for the centuries that fiat has existed. Despite the controlling factor of forceful imposition by a regime, markets will signal value that cannot be suppressed, collapsing each forced currency over time. Essentially, currencies have evolved as a pyramid scheme both analogous to the slaves that built the Great Pyramids, proudly symbolized on dollar bills, as well as in structure, as the majority of the value lies at the base where the select few, closest to the printer gain most while the least worker by price of taxation and inflation, with no assets to hedge otherwise, is left with the least value. Breedlove explains that money enables the flow of what humans value, however, when used as a tool, it becomes immoral, concealing truths and hindering the function of honest markets. 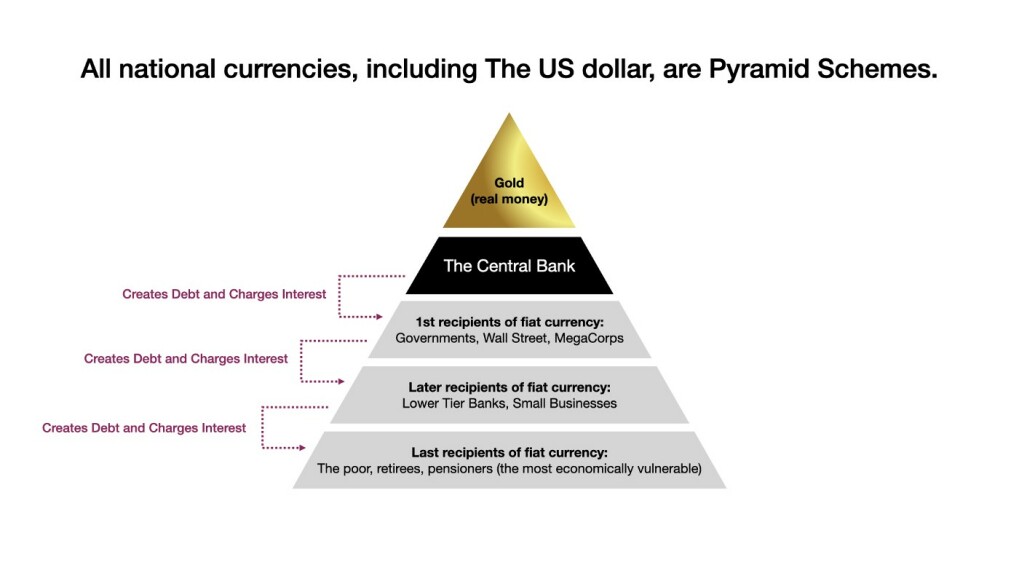 🍃  Stealing from the poor, the inflation built into centrally controlled money-tool monopolies results as more is printed, debasing the supply and decreasing the value of each monetary unit in the stock-to-flow ratio. The final stage of every fiat currency pyramid scheme, throughout the centuries that they've been employed, plummets into hyper-inflation until the currency collapses.

🍃Stealing from the wealthy and the working, taxation is theft and slavery, as money is an exchange for time when work enters the market. Taxation is coercive, in that not doing so results in suppression of freedom over our personal autonomy. The productivity of our time is thus inadvertently stolen making us fractional slaves to the state under a fiat monetary standard. The inefficiency of these structures results in violence as defined by the imposition through coercion or force to extract human time non-consensually. This distortion in the marketplace births externalities that have harmed every aspect of society for the centuries that humans have endured under multiple globally dominant Nation-State backed fiat currencies. The fiat system is simply an imperialist tool to conquer and plunder the general populace of territories far and wide. 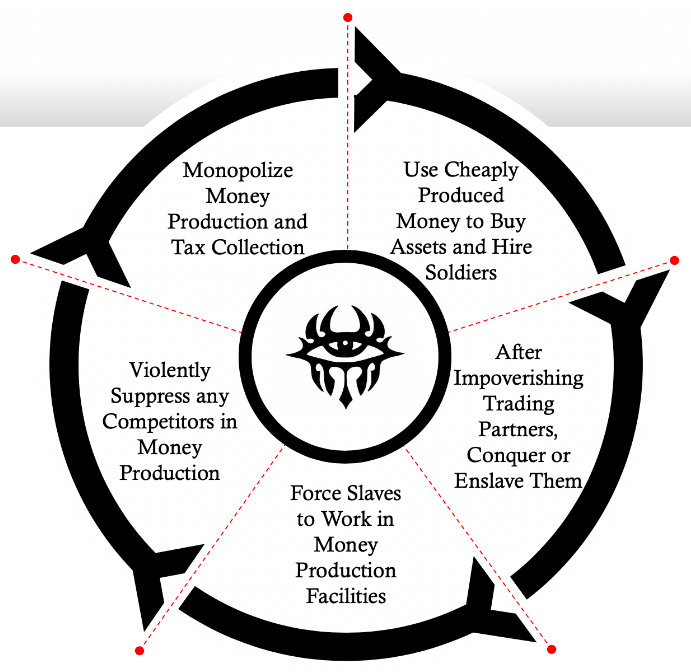 In "Uncovering the Hidden Costs of the PetroDollar", Alex Gladstein suspects war as the act of maintaining and compelling dominance of the Global Reserve currency. Viewed through the lens of the war in Iraq, he ponders with hindsight, motivation for the sake of preserving the petro-dollar value against the efforts of Saddam Hussein to debase that value by selling Iraqi oil in Euros instead. Aside from condoning Saudi dictatorship through the petro-dollar partnership, an artificial demand for the dollar led to market distortions such as the irreconcilable value exchange between printing money and pumping oil out of the ground. This briefly extended the dominance of the US dollar, though in a move away from reliance on US currency, more and more countries are increasingly beginning to price oil in their own currencies leading to increased demonetization out of US dollar hegemony. The hope in #Bitcoin lies simply in removing the power of any Nation to declare such authoritative dominance through a financial tool, forcing cooperation between enemies as the vehicle for peace and greatly reducing incentives for war.

By peeling back the layers that disguise the theft and bloodshed that any fiat monetary system of value exchange produces, we see that a Global Reserve by ANY Nation-State or government authority is anti-ethical to the flourishing evolution for Humankind towards Peace and the cooperation needed of a species enlightened in global, virtual, multi-galactic realities and beyond. This transition from dirty money based on lies, into an honest environment, will enable more efficient returns to participants globally via an ethical market system producing integral market returns. Imagine a world, ascendant from the market truths of our collective, multidimensional aspirations of each unique individual informing a more healthy social order,  free from oppressive, draconian hierarchies of rulership by violence and force. 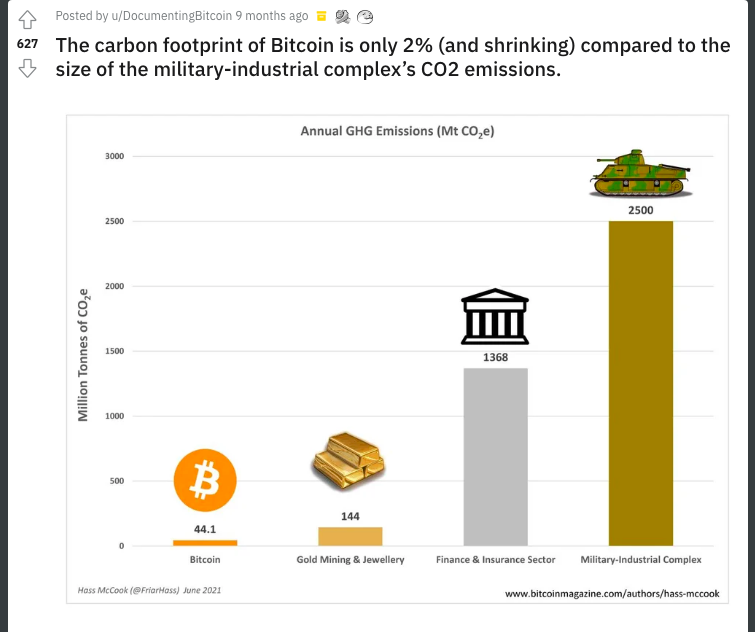 Hyper-Bitcoinization will incentivize the behavior of individuals collectively, to cooperate under specified rules increasing confidence in an honest market environment, opposed to one relying on some official or group, to determine rates, reserve, production, or other debasing measures that steal from society. Funding for war will be thwarted and other measures and protocols will shift towards voluntary resolutions.

In conclusion, FUD (Fear Uncertainty Doubt) is often peddled with motivations to dictate the master and slave roles in society. Bitcoin, can be the Universal protocol of our species to convey value in global exchange via a digital ledger exchanging value through a peer-to-peer social structure, driven by incentives opposed to the directives of any Nation-State fiat currency. With participation accessible indiscriminately to the world, we can combine our individually cultivated collective resources into more honest and efficient returns, elevating humanity towards ethical generational wealth. The truth-pill for this entry, I prescribe by @Tip_NZ, is "Dirty Money" as a reminder that the incentive of renewable energy priced into the Bitcoin mining costs, stands on more firm moral ground than than any directive, most especially towards placing that power into the hands of those with the most resources to stake. Bitcoin incentivizes more equality as hard money, as none can benefit through privileged reproduction. It incentives cooperation over competition, diminishing the returns on War.  Let logic and reason lead the way as I've just begun down the dens of the rabbit holes I've uncovered and have only just dipped my toe into the depth of the topics covered in the readings I've reviewed. References can be found in the details section to follow up further on the ethics, implications, and projections yet to explore in them all. I most highly recommend the  "Masters and Slaves of Money" series disseminated by Robert Breedlove himself on the "What is Money Show" posted to  YouTube.

I would be very grateful for every like and share to expose the truth of the most contorting troubles our world faces for the sake of accelerating our mobility away from social degradation, to begin sooner than later in rebuilding from the ground up with truth, integrity, and ethical regard for individual freedom.

🚀🌙✨Build your crypto stacks doing what you do any ways🔥

⚡️Subscribe to my channel and see my videos when released 😊✨

References in order of appearance:

​​     •   Alex Gladstein. "Uncovering The Hidden Costs Of The Petrodollar"
https://bitcoinmagazine.com/culture/the-hidden-costs-of-the-petrodollar

I've also just joined the Lightning Network and welcome any tips or even just to test out the service if you like ;)

Much Gratitude for any donations and support!