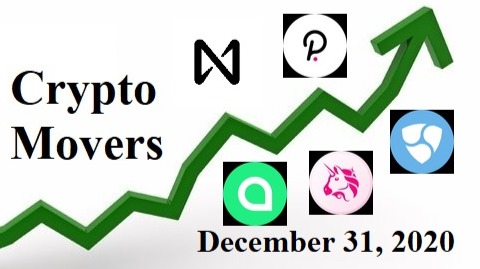 Welcome to “Top 5 Cryptocurrency Movers” where I look at all the major crypto coins on the market and choose the five that made the biggest move (either positive or negative) on this day, explaining my thoughts why the move happened, as well as the historical significance of the particular crypto. Here are my top five cryptocurrency movers for December 31, 2020:

Polkadot finished a breakout year in style, gaining 15% to its highest level yet on record. The new cryptocurrency released only in August 2020 is already the sixth largest crypto by market cap, overtaking Bitcoin Cash today. DOT is a next-generation blockchain protocol that is capable of connecting multiple specialized blockchains into one unified network, and is seen as the main rival to Ethereum. Among the new features expected in 2021 for Polkadot is a Polkadot-based wrapped version of Bitcoin called PolkaBTC.

The cryptocurrency developed to use on the Sia Network, Siacoin, went down eight percent in trading today and has had a rough month as other crypto coins flourished. Sia is a blockchain-based cloud storage solution which puts a decentralized storage platform at the users’ disposal, using Siacoin to enable payments via file contracts. There are three ways that Siacoin can be used, either renters will pay for using the blockchain, or the crypto can be mined and traded.

Based on strong platform and infrastructure development, NEAR Protocol continues grow and reach new highs in a short time frame. Launched in October 2020, NEAR has only been on the market for two months but is already one of the top 100 coins based on market cap, due to being a proof-of-stake blockchain built on a mechanism called “Nightshade”. They use a technique called “sharding” that splits the network into multiple pieces so the computation is done in parallel and there won’t be a theoretical limit on the network’s capacity.

NEM continues to be one of the hardest hit crypto coins these last two weeks, falling an additional four percent today, still reeling off the news of the SEC lawsuit to Ripple (XRP). The New Economy Movement, which is what NEM stands for, is a blockchain and technology platform that efficiently manages smart assets and data easily for a low cost. XEM originated in 2014, following an NXT fork.

The decentralized exchange Uniswap is today’s biggest winner, rising 18% on news that Cover Protocol released a compensation plan for token holders affected by the recent mining contract hack, with those new COVER tokens being available on liquidity providers such as Uniswap. UNI makes it simple for users to exchange any ERC-20 token for another ERC-20 token, without the need for buyers and sellers to create a demand. Uniswap makes revenue by taking a small fee in the process.

Note that these prices are as of 2:00 PM EST/11:00 AM PST on the given day, and might not reflect the current price of the coin at the time of viewing this post.

Starting January 1, 2021, the timing of these daily posts will change to 9:00 PM EST/6:00 PM PST to better reflect the crypto market trading day.