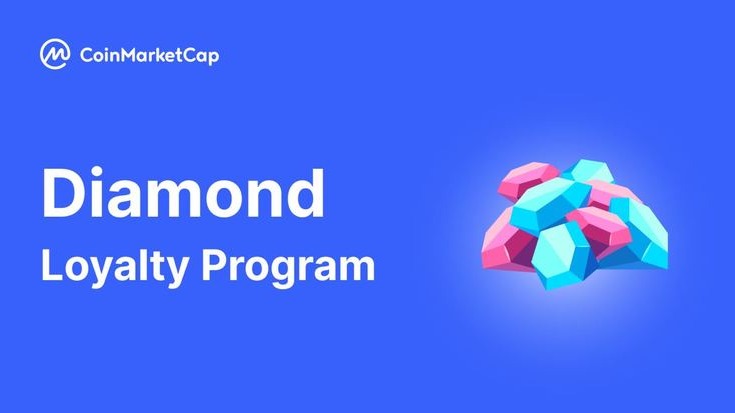 Why everyone should consider joining Coinmarketcap's Diamond Loyalty program

Hello everyone, let me preface as usual that the following article is not financial advice and instead is for educational and entertainment purposes only. As always, please do your own research and find out what investment is for you.

I'm going to make a baseline assumption here that you probably already know about Coinmarketcap, so I won't go into it in detail but in a nutshell, Coinmarketcap is probably one of the top, if not the top go-to place for anyone that's trying to quickly look up the market price for a listed token. There's other mainstream competitors such as Coingecko, and some of these places have their own loyalty award systems, but as I'll get into it below, Coinmarketcap really takes the cake when it comes to their awards, and for several very good reasons.

So the rewards system itself is extremely straight forward. You do certain tasks, like logging in or participate in voting on something in order to accrue diamonds every day. All the different ways you can accrue diamonds is easily spelled out below: 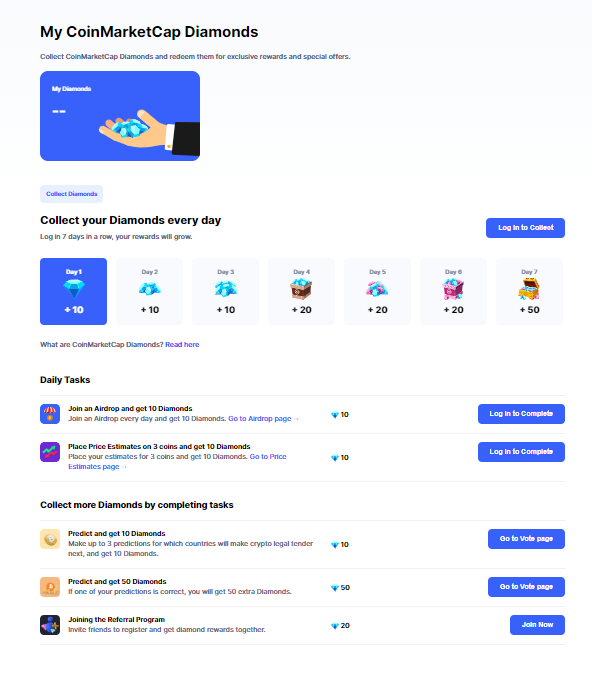 The easiest way to get the most diamonds, is just simply logging in where you can earn a range from 10 to 50 diamonds, with 50 being the reward if you successfully login and collect 7 consecutive days in a row. Other easy tasks include signing up to get a chance in joining an airdrop submitting price estimates--tasks which you can get done in just a few minutes. The other tasks, such as referrals or voting are more limited, as these aren't things you can do everyday. And speaking of referrals, if you're not a member yet, consider using my referral link: https://coinmarketcap.com/invite?ref=CRVFLTLR, And if you don't use mine, then just please make sure you use a referral link period, otherwise, you'll miss out on getting an extra referral bonus once you've accumulated at least 100 diamonds.

So when I first joined, I noticed that the majority of the rewards were all Coinmarketcap branded. And I mean, I guess that's cool and all, but I personally wouldn't expect to flash around in public that much an NFT that has the Coinmarketcap logo plastered all over it. But in the past couple of months, I've been super impressed about the simple diversity of things they've offered, including metaverse land, pipeflare faucet multipliers, soccer team collectibles, and even race horses! I've been regularly making a point to accrue diamonds over the past few months and to date, I've been able to accumulate a few thousand or so. In the meantime, generally whenever there's a reward that I can afford to redeem, I do so. And so far, I've been able to accumulate 8 NFTs, including these bad boys: 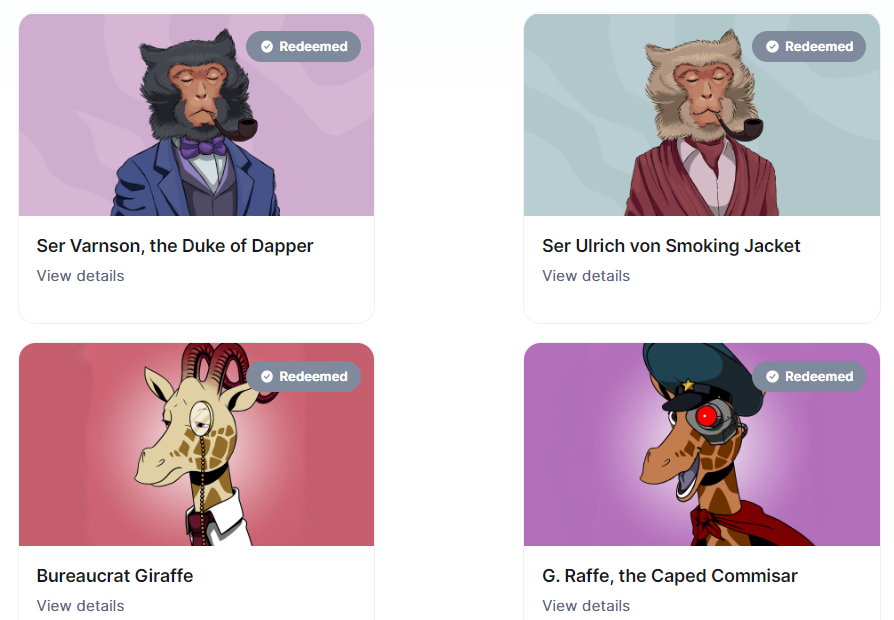 You'll notice that the Ser Ulrich von Smoking Jacket is one I liked so much that I decidedly made it into my new avatar. And in addition to the NFTs, they have had several other awards such as gift cards and file storage subscription services, all which (similar to the NFTs) have sold out within hours, if not in seconds. And because many of these are very limited (some only being 1 of 1's), I've noticed a few things in my trials that might give you an edge in redeeming, especially if you keep getting a "System Error" message which indicates most likely everyone else is trying to spam the website. These include:

1) Turn off your VPN, in general it will boost your internet speed, but for one redemption in particular I noticed that the moment I tried to redeem after turning off my VPN, I was finally able to get through.

2) If you really aren't interested in something, save your diamonds for something that you actually are interested in. The reason for this is that Coinmarketcap doesn't necessarily always broadcast very well in advance what NFTs are going to be up for redemption. Sometimes you'll see something listed days in advance, but sometimes it seems like there's only a day notice. So if you have 1500 diamonds saved up because  you redeemed 500 for an NFT the day before, you may not have enough diamonds to redeem for a more desirable NFT later that requires all 2,000.

3) And because the schedule can be altered last minute, I would recommend that you check to see if there's any to be released every day. If you're already going through the process of accruing diamonds on a daily basis, then I would take that extra 3 seconds to hit the link to the rewards page.

1) Airdrops: I will probably at some point do an entire post on how/where I go in order to scout airdrops, but Coinmarketcap is definitely one of the places where I check routinely for lists of airdrops that are ongoing (although at time of posting there are none in queue). All the tasks you need to do in order to qualify on Coinmarketcap are thankfully pretty simple and take less than two minutes. And as I mentioned before, simply by filling out the form to participate can award you with more diamonds.

2) Learn and Earn: Although this is something I have yet to personally do myself, Coinmarketcap has a learn and earn section where you can earn cryptocurrencies as a reward. Taking a brief scroll-through the different projects, it doesn't appear that all the different tokens have an "earn" attached to the learning bit of it, but basically just like with Coinbase's learn and earn activities, the process is as follows:

As I mentioned before, Coingecko also has a similar "My Candies" program, which they've incentivized with contest giveaways, e-books, and other discounts on subscription services. I would rate these as mediocre because many of these discounts are simply affiliate links that you could get somewhere else for free.

Stakingrewards also has a Hearts rewards system where you can redeem hearts for Staking rewards branded merch.

Both of these rewards programs I think are pretty cool and are great vehicles for loyalty, but in my opinion, no one can top Coinmarketcap's.

I am a complete sucker for free stuff. And I get it, for many people stuff like this might be a complete waste of time. But literally, I spend just a few minutes out of my morning routine and from Ser Ulrich alone, I think it was time and effort well spent. Have you been able to snag any NFTs? Or are there any other crypto-related reward programs that I missed? If so, I'd love to hear about it in the comments below!

And as I mentioned before, if you're not a member yet and you're considering joining, then please consider using my referral link: https://coinmarketcap.com/invite?ref=CRVFLTLR, that way we can both get more diamonds.