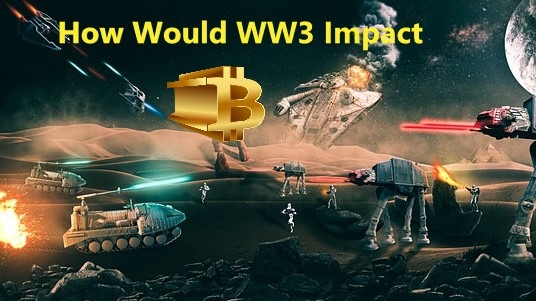 What would be the impact of World War III on the Crypto Market?

So let me start by being politically correct and stating that I am absolutely not calling for war.

But as per my previous article others are:

And if you did not get that message yet, please tell me these guys are not on Russian TV and this is Western propaganda? Because it would make me feel much better if that is what we are seeing.

I do hope that this is a deep fake, because I think only few people realize the impact of a global nuclear war....or even the use of 1 Hydrogen bomb.

Therefore let´s pray that someone responsible for pushing that red button has seen that youtube video and ensures it´s not pushed during WW3. Because if the button is pushed and more than 2 nukes are detonated, it would be the last crypto nuclear winter man would witness.

Therefore I will look at the other scenario:  What would the market trend do during a non-nuclear WW3, if we compare it to the stock market trend of WW2?

As currently there is a lot of talk about the correlation between the stock & crypto market and we had no crypto market back then, I will have a look at how the stock market behaved then and now. And then compare that to what we can see happening in the crypto market.

What happened in WW2

If I say what happened I am not gonna give you a history lesson, but it´s pretty similar to what we are seeing now. Although back then the guy had a mustache, but both were ...well not very stable-minded and both suffered from paranoia. Both knew that a large part of the world did not take kindly to their leadership, and both had an immense amount of power within the country they led.

Now I also see Putin´s point as NATO should not have overstepped the boundaries of the neutral corridor, and by doing so provoked the Russian Bear. So there is some reason why Russia reacts a bear stung by a bee.

The bear, just like Germany in WW2 is not happy and feels a bit caged. Especially when it looks back to the once so powerful empire it used to be. It sees opportunity at its borders, in Germany´s case it planned the Anschluss.

The Anschluss planned to reunite all German-speaking countries, so it started with the annexation of Austria (Compare with Crimea) and then, as that triggered little global response added Sudetenland (compare with Donbas) an area of Czechoslovakia (compare with Ukraine) as it had a predominantly ethnic German population.

Well, it did not take long after to add the whole of Czechoslovakia  (compare with Ukraine) and invade Poland (compare with TBC).

So as per the above Russia does the same thing. It got its feet wet with the Krim and now is working on the annexation of the Donbas "People´s Republic" and already eying Transnistria ( Pridnestrovian Moldavian Republic (PMR) ), which even according to Russia is officially still part of Moldavia.

Now just for the sake of the argument let´s see what happens if/when this turns into a non-nuclear global war. 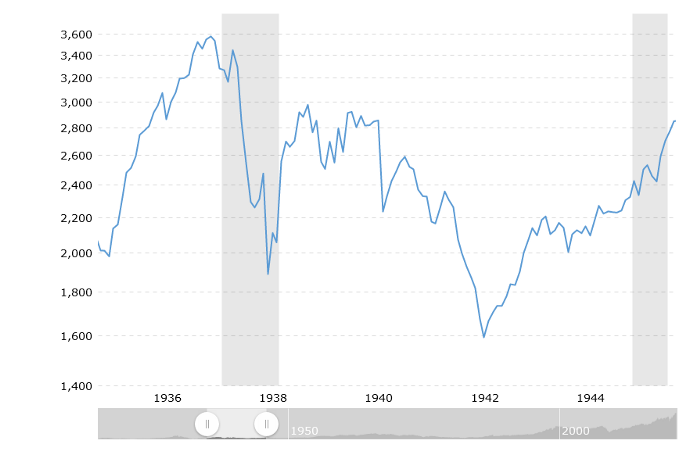 The initial big drop in the US stock market happened in 1938, when Germany annexes Austria. And the rest of the world was faced with the aggression coming from Germany for the first time.

This does not compare with what we see happening to the Dow Jones when Russia annexes Crimea in 2014, but it does resemble a lot of the current situation (Ukrainian invasion). 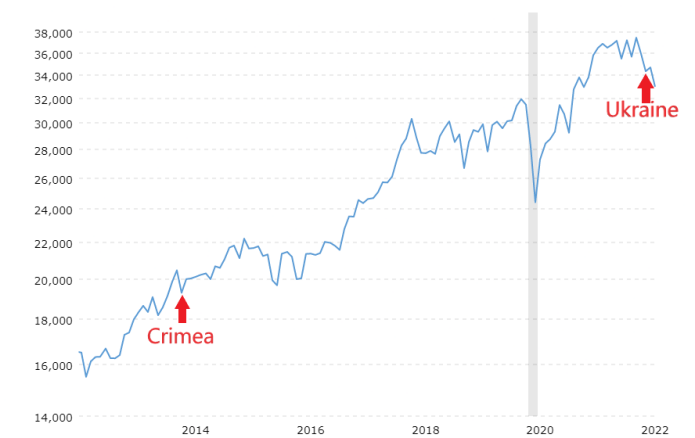 If we compare that to today we so far dropped like 14% so the stock market might drop another 30% which would take us to around 24.000.

The stock market mirrored the actions we saw in 1938, and if I would extrapolate that reaction we can see stocks crashing a lot more in the next four months. The stock market dip took about 6 months till it accepted the new normal. That would take us to the end of August 2022.

But what caused that 2nd dip

The second dip started in 1940 with the fall of France. We see that the market had recovered quite a bit and then a sharp downtrend happens when France fell. That downtrend continues till 1942, due to global victories by the Axis ( Nazi Germany, the Kingdom of Italy, and the Empire of Japan).

So to cut it short, the initial aggression causes a dump in the stock market, then the fall of a huge opposing country causes a sharp downtrend (fall of Ukraine?) and that downtrend continues as long as the opposite party seems to be on the winning hand.

Things started changing when the upper hand in the conflict started to shift to the so-called allied side which also shows clearly on the chart.

But how about crypto

Now the crypto market was already headed downhill but the Ukraine invasion triggered a very short dip and within days the market turned upwards. 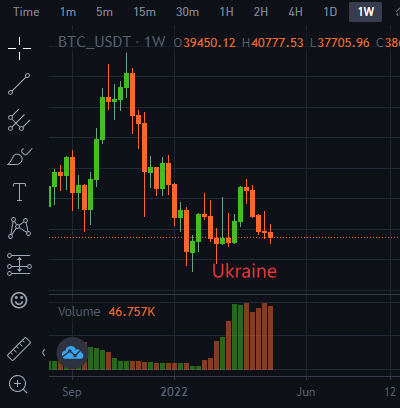 Now I would love to have more data points, but based on the little bit of data we have got.... I would say the impact of a war on the crypto market is definitely different than on the stock market. Stock market plummeted, crypto market rose up during the first 2 months of the invasion.

I know everybody is currently mentioning that the crypto market correlates to the stock market, but that might be on the lower time frames. Because looking at these pictures I see a clear difference during these last 2 months.

Now, why would that be?

My assumption is that the crypto market is more decentralized and global than the US stock market. Therefore it has less of a one-sided dependency.

Just to give you an idea of the spread, the following table shows top countries by the % of their population that are crypto owners. 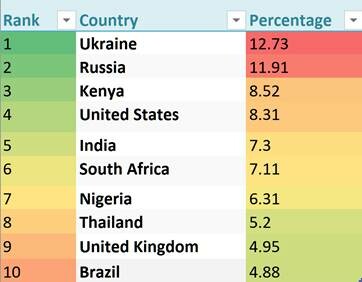 What you notice straight away, or should notice it that the top 2 countries are the countries currently having the conflict. This conflict has a widespread financial impact on both sides (for different reasons). The conflict has driven the crypto adoption in both countries making them clearly stand out from the rest. If this conflict would escalate into WW3 involving more countries directly, I expect to see the same thing happening to those countries.

Crypto is  a global currency

As you can see the usage of Crypto is spread very globally. Therefore it does not really matter which region or regions will be involved we will see the increased adoption taking place in whatever country is getting directly involved. 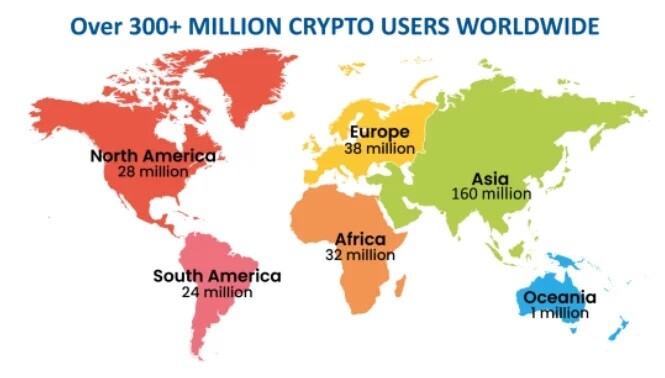 Of course, we have seen governments trying to destabilize the global & decentralized aspect of crypto by asking, or telling exchanges to block certain transactions lately.

I am not a crypto Maxi, so I would like to avoid any further escalation of this conflict, but from an adoption perspective, a non-nuclear World War would drive crypto adoption at a blitzkrieg speed.

Which would make it a much better investment during such a period than the traditional one-sided stock market.

These are just my observations feel free to tell me I am full of it, and provide your view on this comparison as we have very little to go on historically.

Hope this article will be fiction Forever. Feel free to hit that like button, but it would be even greater to read some of your points of view. 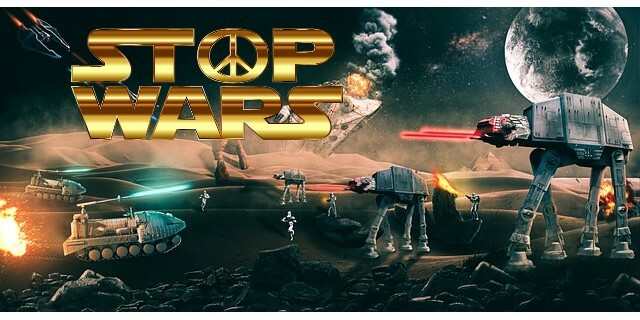