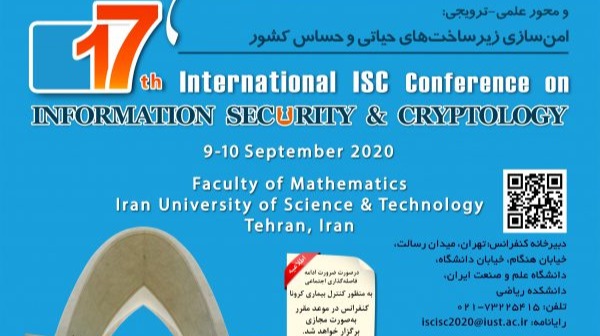 The Persian Society Of Cryptology Cooperate With Iran Cyber Police

The Persian Society Of Cryptology Cooperate With Iran Cyber Police

In this meeting, Habib Rostami, the secretary of the Persian Society of Cryptology, after a talk, regarding 17th International ISC Conference on Information security & Cryptology holding virtual this year, mentioned the memorandum of understanding signed between the National Center for Cyberspace (Iranian Cyber ​​Police) and the Society.

Rostami emphasized: "What the National Center for Cyberspace wants from us is to play the role like the country's cyberspace security observatory, play a role and examine the basic challenges of the cyber field in the country."

So in summary,  The Persian Society of Cryptology will be the hunting dog for Iranian cyber police on the Internet, if they are going to survive and do what they do! And keep holding conferences and pretend to be an independent entity!!!

He also said that the Persian Society of Cryptology is not involved in the process of approving imported hardware products, adding: "We believe that the field of information security needs an independent regulatory organization and we are following up on this issue."

Rostami also said about the activities of the Society of Cryptology in the field of cryptocurrencies: "The first thing we did was to replace the word “Cryptocurrency” with the word “Arz Ramz” which is the right Persian alternative!

He continued: “We also sent a letter to the President in this regard, so the National Center for Cyberspace put on the agenda organizing the situation of digital currencies in the country.

In short, the only thing this society has done is not to use the word cryptocurrency, which is a foreign word, and to use the term "Arz Ramz" instead, which is a more accurate definition! And sending A LETTER!

What a hard and exhausting job!