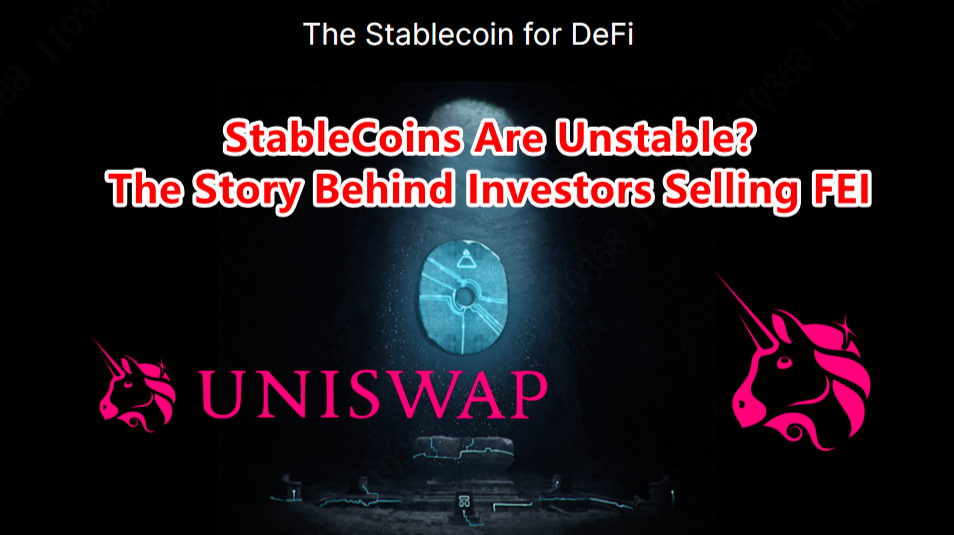 StableCoins Are Unstable? The Story Behind Investors Selling FEI

FEI Protocol, a StableCoins project supported by many mainstream venture capitalists, hopes to build a StableCoins anchored 1:1 with the U.S. dollar and create a StableCoins protocol that will directly use its tokens to purchase assets instead of using them as loan collateral. However, just a week after its launch, the FEI price could not be accurately anchored to $1.

According to data from Coingecko, since April 7, FEI prices have been falling sharply, and even hit the historical low of $0.734329, a drop of more than 25%. At present, it seems that FEI's goal has not been achieved, and it can be described as a bad start. Its team seems to underestimate the market participation. Not only that, many people who "hop into the project in a hurry" do not have a deep understanding of FEI's price stability "direct incentive" method. But this also shows that any newly launched Decentralized Finance (DeFi) protocol is not the only way to "easy money". From the previous situation, retail investors have realized that they must enter the market more cautiously. If you don’t focus on long-term development goals but are too eager for quick success, you will easily make mistakes in the crypto market.

Simply put, the model is that the user provides 100 USD worth of ether (ETH, currently the second largest cryptocurrency by market value) to FEI Protocol under the smart contract, and this smart contract sends the value to the wallet that sends the ether. $100 FEI. There is no upper limit on the amount of FEI tokens issued. Only when the purchase of FEI occurs, the smart contract will mint FEI tokens. In other words, FEI is a kind of StableCoins that are cast on demand, not based on a preset supply. Basically, this model is not too problematic. At this stage, the basic idea of ​​FEI is like this.

Unlike FEI’s main competitor, the StableCoins protocol MakerDAO, the biggest innovation brought by FEI is that the funds invested in the FEI protocol belong to FEI, because FEI tokens are not minted based on debt, but based on transactions. . According to the MakerDAO agreement, DAI StableCoins will be created when a user has a loan demand, and then the user will use DAI as the loan collateral, but the value of the asset that can be accessed is at most two-thirds of the value of the collateral. Not only that, for the lender, they must eventually pay off the loan interest, otherwise they will not be able to recover the collateral. From this perspective, MakerDAO gives the borrower a feeling that even if I borrow the assets, it seems that these assets still belong to the borrower.

How is FEI mortgaged

FEI now owns ETH from the project’s launch event. Early supporters invested in ETH and obtained StableCoins FEI at a discounted price. In this way, FEI obtained ETH collateral worth more than $1 billion. Therefore, the wallets of the early project supporters now have FEI, and then the agreement starts the Uniswap liquidity pool, where 1 FEI = 1 USD worth of ETH.

So some people might say that these FEIs were cast in Uniswap in anticipation of demand, and there is no real circulation. In terms of on-chain calculation ("GAS") fees, it seems more effective for users to purchase FEI on Uniswap in this way. Therefore, in a sense, FEI tokens on Uniswap cannot be regarded as real FEI unless someone goes to Buy these tokens. This is why the market value of FEI's tokens is actually about US$2.2 billion, but the FEI analysis page only shows the protocol control value (PCV) of US$1.3 billion, which is actually an asset locked by the FEI smart contract.

On the other hand, the FEI in the Uniswap liquidity pool is not entirely a circulating supply, and any other assets that exist inside can be regarded as part of the circulating supply. For the FEI agreement, with USD 1 billion worth of ETH on hand, some newly minted FEI could have been purchased from the market to create a Uniswap pool. The size of this pool may be relatively small, but don’t forget that FEI itself is also a new one. Of tokens.

StableCoins in the "traditional sense" have proven to be very valuable in the cryptocurrency market, especially for traders. With the "help" of StableCoins, traders can quickly exit short-term transactions and lock in returns with assets whose prices will not change. So far, the most successful StableCoins on the market are all pegged to the U.S. dollar, which also shows that even true believers of cryptocurrencies do not want to escape from fiat currencies.

Although FEI is a StableCoins, judging from the current market performance, it is very unstable. The FEI's core means of maintaining its peg to the US dollar not only failed to work, but worsened. This situation also highlights how difficult it is to build a pure algorithm StableCoins. In the cryptocurrency industry, some entrepreneurs are very interested in the idea of ​​programmable currencies, but now, if you look at the market performance of FEI, they may have to retreat.

In fact, it is really difficult to anchor the algorithmic StableCoins to the US dollar exchange rate, and this algorithm mechanism is still in its infancy and experimental stage.

Although the price of FEI is still lower than the anchor price of $1 so far, it is not difficult for FEI to solve this problem. It only needs to deal with the other side of the "equation". FEI can encourage users to sell a portion of FEI tokens from the Uniswap pool at any time, and then provide some incentives to these users who sell tokens, and then provide them with less tokens when users buy FEI tokens. In theory, this approach should increase some buying pressure and curb some selling pressure. But disappointingly, this method is useless. FEI's penalty mechanism not only makes supply disappear, but also makes demand disappear. It actually punishes both the supply and demand sides, which greatly limits the feasibility.

If you read the project documents carefully, I believe you will find that the concept of FEI has actually gone far beyond DeFi. It is undeniable that FEI has created a new StableCoins mechanism. Uniswap has never shown the listed price/stated price before. As a result, many traders find that the subsequent delivery price is sometimes lower than the listed price in the transaction. When FEI is traded, if it is sold at a low price, some FEI tokens will be destroyed, but this situation will also lead to some panic exits. In response to this mechanism, FEI launched another mechanism: Reweight.

Before introducing Reweight, let's talk about Decentralized Exchange (DEX) Uniswap. Uniswap is an automated market maker that has no assets itself, but it provides all users with a way to "make money" by depositing crypto asset trading pairs into Uniswap. As long as there are users who use the protocol to conduct these cryptocurrency transactions, they can get from it. Earn a little income.

The FAI protocol itself is the largest liquidity provider in the ETH/FEI liquidity pool on Uniswap. When the FEI is below the anchor price of $1 during the transaction, the FEI protocol will reweight the entire liquidity pool. First, the FEI protocol withdraws all the ETH and FEI controlled by it on the DEX, and there will still be other funds deposited in the ETH/FEI pool, so FEI will deposit the "correct" funds in order to facilitate the liquidity pool Funds can match 1FEI = 1 USD worth of ETH. Second, deposit the remaining ETH and FEI into the Uniswap pool as much as possible to maintain the anchor exchange rate. As the market needs to reduce supply, some FEI tokens will stay in the liquidity pool again after reweight. This is why the FEI price will be lower than the anchor price, and finally these remaining FEI tokens will be destroyed.

Since many people now want to quit FEI when they get the best price for FEI, once Reweight, a large number of users will rush to quit. However, this kind of "run" will obviously cause the value to plummet again and trigger the FEI to break away from the pegged exchange rate again. So this is why things get worse after each reweight. The most ironic thing is that every time Reweight will create the best sales opportunity, it turns out that it attracts more people to choose to sell.

How to optimize and improve?

The FEI team is already considering some means to solve the current problems. The founder Joey Santoro (Joey Santoro) proposed to reweight regularly and relax the built-in incentives in the Uniswap pool, or let FEI The agreement occupies a dominant position in the direct incentive mechanism. Some community members also suggested that for a StableCoins, always maintaining value anchoring is far more important than use cases, so it is necessary to optimize and improve the protocol to speed up the pace of reweighting.

However, some people think that the reason why people choose to sell FEI may be because many people do not understand this system, but they just feel that there is a pure arbitrage opportunity. Considering that there is a large amount of initial supply of tokens when the project is launched, it is easy to lead to insufficient natural demand for FEI in the market now, thus triggering selling pressure. Therefore, none of the above problems are real problems.