A Study on Token Velocity
MyCryptoOutlook2022 BitYard Contest and Giveaway - $1,200 in ETH Prizes! >> JOIN FROM HERE << 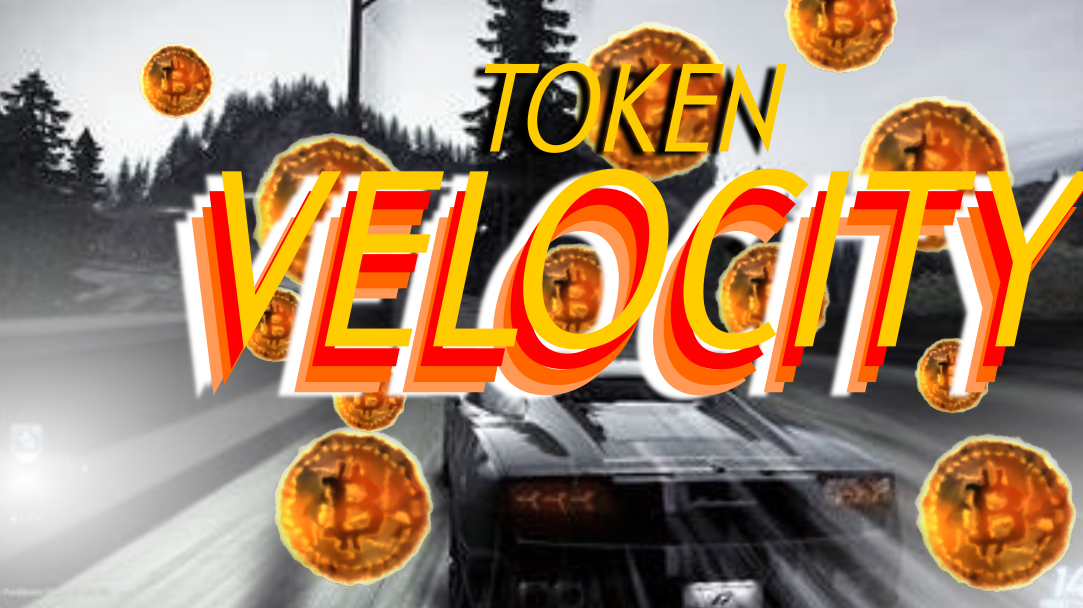 A Study on Token Velocity

There is a certain debate in the crypto community about the topic of "Token Velocity". Velocity is basically the number of times a token change hands in average during a certain period of time. To illustrate this, let's look at a simple example.

Imagine there's a very small village, that is closed off from the outside world, and the total amount of money in that village is 1,000 silver coins (SC). During one month, the following goods were sold/bought: 5 sheep for 300 SC; 10kg of corn for 10 SC; 100 litters of milk for 10 SC; and 10 pieces of furniture for 180 SC. The total amount transacted was 500 SC, which is half the total amount of SC in the village, so we say that the velocity of SC was 0.5 in that month.

The discussion started, perhaps, in this article by Kyle Samani. Here Samani argues that tokens with high velocity will tend to have very low prices. He opens with the following:

Basically, all token pitches include a line that goes something like this: “There is a fixed supply of tokens. As demand for the token increases, so must the price”.

This logic fails to take into account the velocity problem.

I like Samani's reasoning, because I too had noticed the same problem when trying to evaluate the price of tokens (for example, in this post of mine). We can try to estimate the volume of transactions of a certain token economy, but how does that relate to total market capitalization? Basically, what I was looking for was the Exchange Equation:

The right-hand side, P * Q, is "GDP", or the total amount transacted in an economy (in token units); M is the size of the money supply (number of tokens); and V is the missing variable: velocity. Now to get the USD (or any fiat) value, we can just multiply both sides by the token/USD exchange rate R:

Now RPQ is the GDP in USD, and we get that:

Where R * M is the total market cap (in USD). So, the market cap is the total "GDP" in USD divided by velocity. From that, Samani concludes that, if one wants to create valuable tokens, token designers should plan a "tokenomics" model where the tokens have low velocity. In his words:

Most utility tokens don’t provide a compelling reason for token holders to hold the token for more than a few seconds. Absent speculation, assets with high velocity will struggle to maintain long-term price appreciation.

Samani is not alone, Sasha Kaletsky in his article also concludes:

This leads to a counter-intuitive conclusion: the longer and more inefficient a cryptocurrency’s transactions are, all else being equal, the higher its value will be, and vice versa.

Now, this conclusion is counter-intuitive because it is wrong (or at least misleading), as Scott Locklin from Brave points out in his paper. As Locklin points out, velocity is not an external variable that can be fiddled with at will. Velocity is tied to the economy; as people in the economy transact more, velocity goes up. And obviously, that is a good sign. Most crypto holders are happy when they hear that their coin is going to be accepted at a new service or shop, for good reason. More use of the coin increases the RPQ value above (the "GDP") and velocity.

Moreover, as Locklin points out, it is nonsense to think that to increase the value of a token we should find ways of making transactions less efficient. If that was true, the FED would call VISA in the case of inflation and ask them to slow down transaction time. Of course the speed of processing of transactions is not the bottleneck of any decent economy. If that is the case for a cryptocurrency, guess what will happen? People will just not use it. The slowness of BTC transactions is by no means one of the reasons why it has high value. If anything, it is a reason for people to think about alternatives with more efficient transactions, driving BTC prices down.

Indeed, velocity is in the denominator, so market cap is inversely proportional to it. But this does not mean that velocity has to be messed with. We just need to recognize what is the natural or expected velocity of a given system and use that in our price analysis. Maybe in that regard Scott Locklin was too dismissive of Samani's and Kaletsky's points. Token price is crucially dependent on velocity indeed. That is one reason why, for example, I think XRP is in a bubble, as skillfully explained here -- despite the author's mistake of blaming XRP fast transactions for its poor price prospects. XRP being fast is good. Again, transaction speed is not the bottleneck. Even though we can transact in milliseconds, this doesn't mean there will be such demand.

Now, on the importance of velocity, imagine two extreme scenarios. Scenario 1: we go back to our village economy. Imagine that the total transacted in one day was 100 SC. Now, imagine that there is only 1 SC token available. Velocity is very high: 100/day. The problem here is a lack of liquidity. We need to fulfill 100 SC in transaction of goods, but we only have one miserable token. This makes everything impractical. There is a lack of money in the system. On the other extreme, imagine the same 100 SC per day, but now there is 100 billion SC in the system. Here we have the opposite situation: too much liquidity. Too much money for too few goods. Then SC value goes down: there's no demand for it.

I haven't found many studies about velocity out of the context of fiat currency, but my intuition is that there is a "natural" range of velocities for given types of economies. From wikipedia:

The determinants and consequent stability of the velocity of money are a subject of controversy across and within schools of economic thought. Those favoring a quantity theory of money have tended to believe that, in the absence of inflationary or deflationary expectations, velocity will be technologically determined and stable

So this is a controversial topic, but it might help to look at examples. Below, I analysed the velocities of some currencies: fiat and crypto.

In this interesting article, the author mentions:

Years of QE has caused money supply to grow at an unprecedented pace and there is ample liquidity in the financial system.

Money velocity has declined due to a massive increase in money supply.

Maybe this can give us a clue about why the Hackernoon article is mistaken about XRP's "velocity problem": XRP has an immense money supply, and as of yet (according to that same article) not much demand. That is a reason for excessive liquidity and low velocity, and still low value.

Now let's look at the velocity of some cryptocurrencies. (Obs: all volume data below is from a couple of days ago.)

BTC has one of the lowest velocities of all crypto/fiat currencies.

Ethereum is the main platform for DApps, at least in number of DApps and developer community.

BAT is being used already in the Brave Browser, which might give us an idea of velocity for a token in its "natural environment", although I think most of BAT's volume is still probably due to trading and speculation.

Steem has 91 DApps, just after Ethereum and EOS, and a quite active community in Steemit.

* I am not sure if the value reported in the link concerns the whole on-chain volume. Unfortunately I haven't found that metric online.

EOS is the DApps platform with most daily active users, and probably the one with largest daily volume (in USD).

By the numbers above, we can see that fiat currencies tend to have a velocity in the order of 1/quarter, or 0.01/day. The cryptocurrencies had some variation. EOS, LINK, BAT and ETH have numbers at least close to real currencies, whereas BTC has the lowest velocity of all, and STEEM, interestingly, has also a quite low velocity. STEEM's case is a very interesting one because it seems to show that high velocity is not what's behind low prices. Steem has experienced a dramatic fall in value since its peak, and I think it is very useful as an example because it is a cryptocurrency that, maybe, has transitioned from the "pure speculation" phase to the "utility" phase. Other cryptocurrencies, however, still owe most of their trading volume -- and, therefore, velocity -- to speculative pressures. That is the weakness of our analysis: we can't really say that these values are "normal" ranges of velocity while these currencies are being mostly traded on exchanges. But the example of Steem might be illustrative, as it may have a higher proportion of its volume related to dapps' transactions. EOS is another interesting case, as it is the crypto with highest number of active Dapp users and probably highest Dapp volume. In that case, it is maybe not a coincidence that such a "healthy" dapp economy has a velocity that resembles fiat currencies'.

Finally, we have to wait to see some examples of token economies that are fully operational to make better estimations of velocity. That can help us to make more realistic price predictions, based on fundamentals.