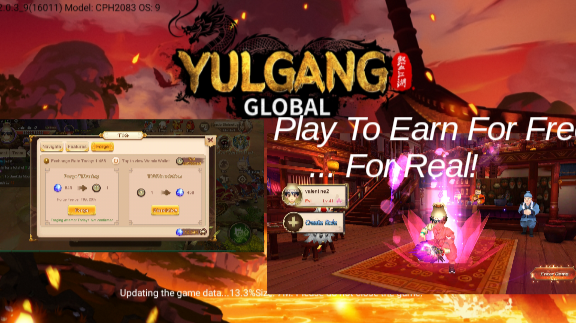 If you know MIR4, a free to play MMORPG game with a play to earn mechanics, then you have probably regretted if you have only ignored it and missed the earning opportunities it has given to thousands of its players. I knew the game, MIR4, when it was just new but for an unknown reason I ignored the game. When people were playing and earning from the game, I realized that I needed to try this it. I tried to download it from Google Play Store but unfortunately it says that my device is not compatible with the game even though I have a good model of cellular phone, so I tried downloading it on APKPure market and somehow got a successful download.

When I was playing MIR4, the game is slow and lag. Sometimes it took me an hour before I can start playing because the server is always full and you need to wait in queue for you to enter the game. Honestly, MIR4 is a beautiful game but it is not mobile friendly. I realized that I can't play this game anymore because of the lags and overloaded servers.

When the month of April started, I heard that there is this new game again from WEMIX exchange that is almost the same with MIR4, a new P2E MMORPG game that is free for everyone. The game is called Yulgang Global and I immediately tried it out.

To be honest, I am a gamer but I am not that much of a fan of MMORPG games. I know it could be fun but I felt that it was not my taste to play this kind of game. But with the concept of play to earn gaming, I didn't hesitate to download and install Yulgang Global.

The good thing about this game is that you don't need to hassle on signing up and creating an account. All you need to do is to use your email by connecting your gmail into the game and you can start playing.

After creating an account and choosing my character, the game started immediately. There was no introduction in the game and you don't really need to hassle on what to do first and what to do next, because you can just simply click on the tasks in the screen and your character will just automatically finish it. When fighting, you can also use auto-battle and your character will automatically fight and cast its skills on its own.

One thing I like about the game is that unlike MIR4, the game is very smooth and you can just experience some lags if the servers are overloaded. And with MIR4, before you can play the game, you need to download resources that will cost almost 8 gigabyte in your storage, but with Yulgang Global, you only need around 3 Gigabyte and you can smoothly play the game.

How To Start In Yulgang Global?

Here are the easy steps on playing the game:

That's how easy it is. You don't really need to worry about what you should do in the game because the game itself will guide you.

How To Earn In Yulgang Global?

$TIG token is only available to trade on WEMIX exchange while Crystals are the currency used in the game. Crystals can also be earned in the game can only be exchanged into $TIG token exclusively inside the game.

There are lots of ways on earning Crystals in the game:

Note: Before you can go and start mining Crystal in the caves, first you need to achieve level 40 and make a second transfer in the (transfer of pets).

Another thing is, you need to have a WEMIX account for you to receive the $TIG tokens. Create an account, bind it in the game and forge those Crystals into $TIG tokens.

As of April 06, 2022, it has been 2 days since I started playing the game. I really grinded hard to achieve level 40 and right now have 12,000 Crystals in my account. It should have been 15,000 but I used some Crystals to upgrade my pet and some in-game items.

If I were to convert this Crystals into $TIG tokens, with a ration of almost 500:1, I can get around 6 $TIG tokens from it. The trading price of $TIG on WEMIX is around $0.09 per token, so much likely I now have around $0.50 by playing the game. I only got this small amount first because I still haven't unlock other tasks and the Caves where players can mine Crystals.

Of course this is a small amount for starters, but the higher your level is in the game and the further you reach playing it, your earning capabilities will also adjust. Just don't forget to finish the tasks everyday and get those Crystal rewards.

Yulgang Global is a free Play-To-Earn game and your investment is only your time for it. Since this is free, do not expect so much on earning thousands of dollars from it. You can get a very good amount from the game while enjoying it is what should really matter. After all, it's an opportunity you cannot just miss.

PS: This article is from my new account in read.cash.I have all the rights to republish it. Thank you ❤️