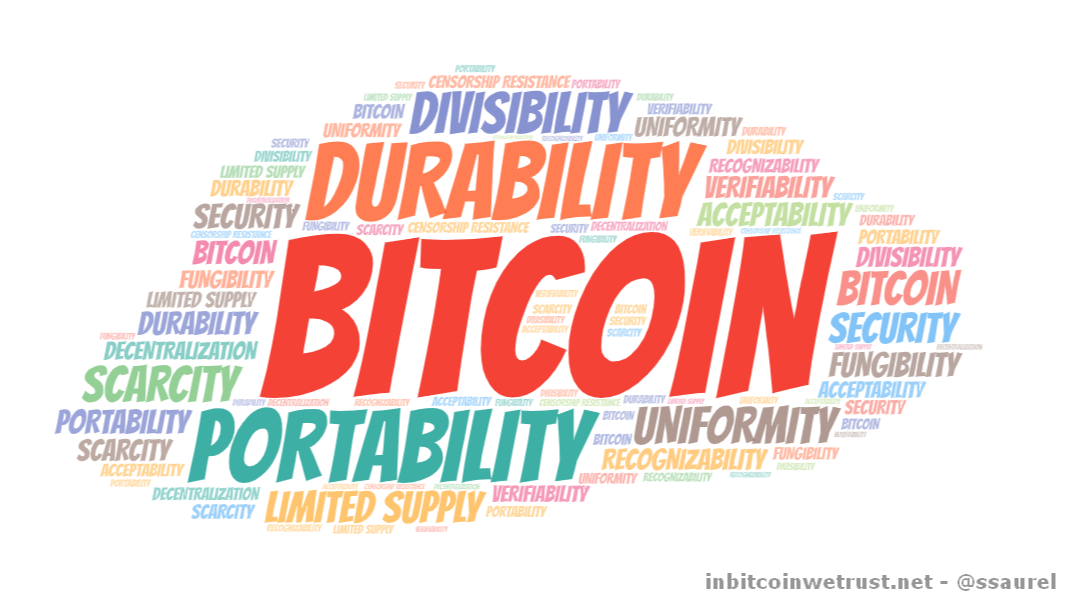 Bitcoin has definitely proved during the last months that it is an exceptional store of value. As a pandemic of a magnitude not seen in decades hit the world, the Bitcoin price has risen by almost +250% year to date as I write this.

The great economic crisis triggered by this coronavirus pandemic has seen central banks take action on an extraordinary scale.

More than 10,000 billion dollars have been printed out of thin air, while central bank interest rates will remain at zero, or even in negative territory, for many months, if not years. In the face of the great monetary inflation that we are experiencing, Bitcoin has proven to be the best hedge available.

Bitcoin is a store of value objectively superior to gold, which is reserved for an elite, while Bitcoin is accessible to the greatest number of people.

The great value proposition of Bitcoin in 2021 is clear: Bitcoin allows you to protect your wealth over time in a way that is resistant to censorship.

The fact that Bitcoin is such a tremendous store of value would almost make some people forget that Bitcoin is also money in its own right. To convince you of this, I suggest you take a look at the 6 characteristics that define real money.

I will then show you that Bitcoin excels in each of these 6 characteristics.

New Bitcoin is issued when a new block is successfully added to the Bitcoin Blockchain. Miners who have validated successfully this block receive newly created Bitcoin as a reward.

Once issued, Bitcoin will exist indefinitely in the system. They can never disappear.

The second piece of good news is that the security of the Bitcoin network continues to strengthen as shown by the constant increase in its Hash Rate over time: 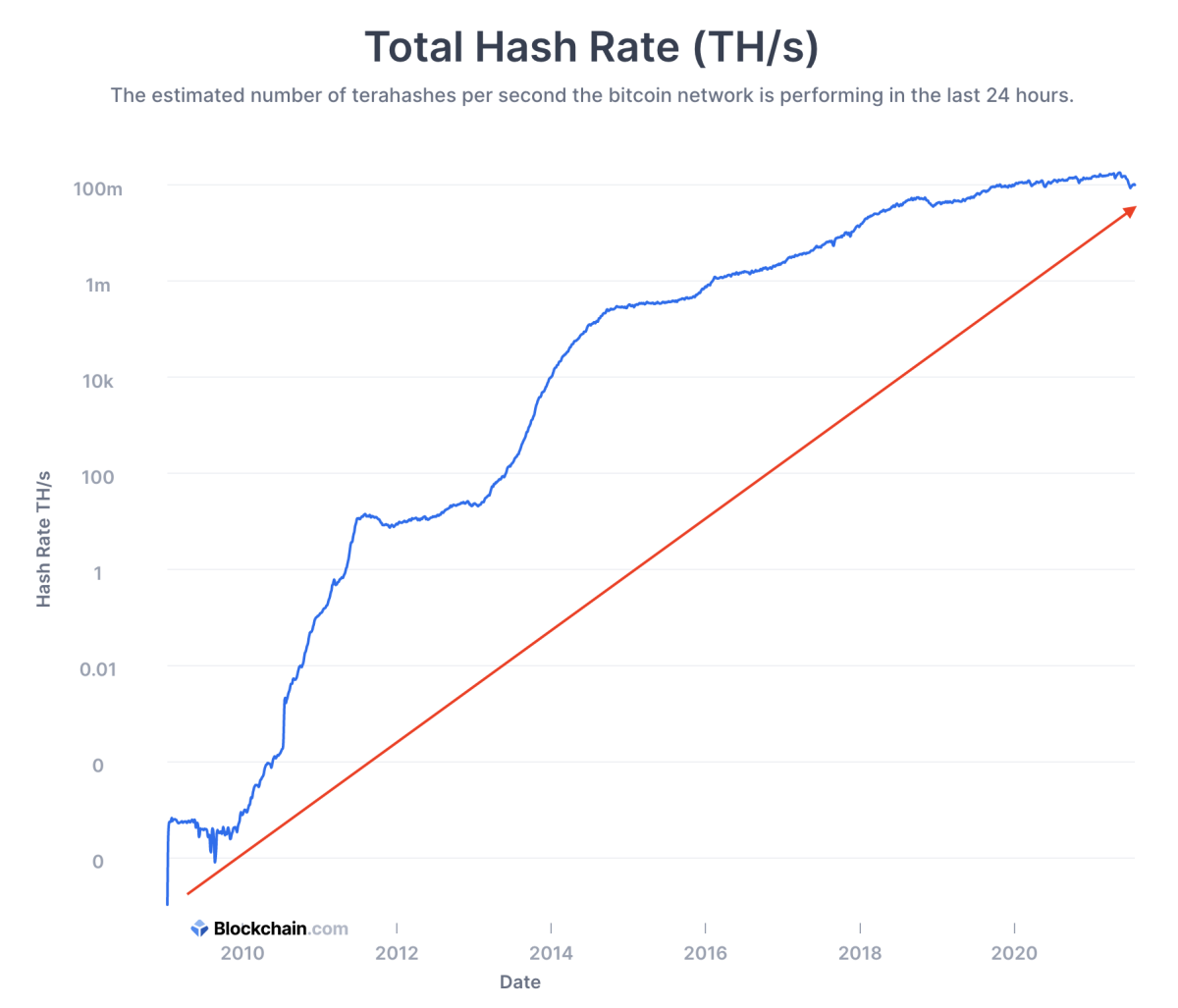 This makes Bitcoin the most secure decentralized network in the world.

Bitcoin can be transferred around the world in just a few minutes with relatively low transaction fees in general. Besides, there is no limit to the number of Bitcoin you can transfer per transaction or over a given period of time.

The only limit on the amount of what you can transfer on the Bitcoin Blockchain is what you own in Bitcoin on your sending address.

You can transfer your Bitcoin at all times because the Bitcoin network operates 24 hours a day, 7 days a week, 365 days a year. Since its creation, Bitcoin has an uptime of 99.985%, which has nothing to envy those of the web giants from Google to Facebook.

Another strength of Bitcoin in this respect is that no one can prevent you from making the transactions of your choice as long as you have the private keys associated with your Bitcoin.

Bitcoin is divisible to eight decimal places. The smallest unit in Bitcoin is called a Satoshi. We have the following equivalences:

Bitcoin’s exceptional divisibility makes it accessible to the greatest number of people. As long as you have a smartphone and an Internet connection, you can purchase a portion of Bitcoin.

This explains why Bitcoin is a much better store of value for the masses than gold.

The #StackSats movement also highlights the importance of accumulating as much Satoshis as possible today. In the future, when the Bitcoin price reaches new heights, talking in Satoshi rather than in BTC will become the norm.

All Satoshis easily accumulated today will be of paramount importance.

All Bitcoin units are equal. Each Bitcoin has the same value and price as another. Uniformity should not be confused with fungibility.

Bitcoin is not completely fungible. In fact, it is still possible to trace the origin of each unit of Bitcoin with different tools. This is because the Bitcoin Blockchain is transparent and everyone can access the history of all the transactions made.

However, solutions exist to improve the fungibility of Bitcoin. The problem is that few users are aware of them at the moment.

The developers in the Bitcoin community are working on solutions to improve this fungibility in the future.

In creating Bitcoin, Satoshi Nakamoto defined precise rules that have never changed for more than eleven years. There will never be more than 21 million BTC.

Bitcoin’s monetary policy is programmatic. It responds to rules written in the Bitcoin source code. They are executed by the full nodes of the Bitcoin network and therefore do not depend on any arbitrary human decision.

Bitcoin is therefore not subject to human corruption, which is one of the deadly sins of the current monetary and financial system.

Since the Bitcoin supply is hard-capped, you have an incredible guarantee when you buy 1 Bitcoin today. You know that your Bitcoin will still represent 1 Bitcoin out of 21 million in 10, 20, or 50 years.

The scarcity of Bitcoin protects your wealth over time. Bitcoin is the hardest money in the world.

Bitcoin is increasingly accepted as a means of payment. It is already a widely used means of exchange. If some people living in Western countries criticize the acceptability of Bitcoin, I invite them to look at what is happening in many emerging countries or under authoritarian regimes.

Bitcoin is already being used there as a means of payment for everyday life. The effects of Bitcoin are more easily observable in countries with the worst economies.

This is what is gradually happening at the moment. Bitcoin is being adopted more and more, whether by large companies like MicroStrategy or by institutional investors like Paul Tudor Jones.

The latter was the first in May 2020 to announce that he preferred to buy Bitcoin over gold to protect himself against the great monetary inflation we are experiencing.

The acceptability of Bitcoin will continue to increase over the next decade. This is Phase 2 of the mass adoption of Bitcoin by the general public.

In Western countries, Bitcoin is mainly seen as a formidable store of value at present. This is logical because it is the greatest value proposition of Bitcoin today.

However, what is happening on the African continent, in South America, or the Middle East, is there to remind us that Bitcoin is also excellent money.

In reality, Bitcoin adapts to the needs of its users. This is one of its incredible strengths. The main difference between Bitcoin and fiat currencies is that all the features that make Bitcoin money are guaranteed by computer source code.

Bitcoin totally abstracts itself from human arbitrary decisions to function. Bitcoin is backed only by the laws of mathematics and its users’ belief in its revolutionary system.