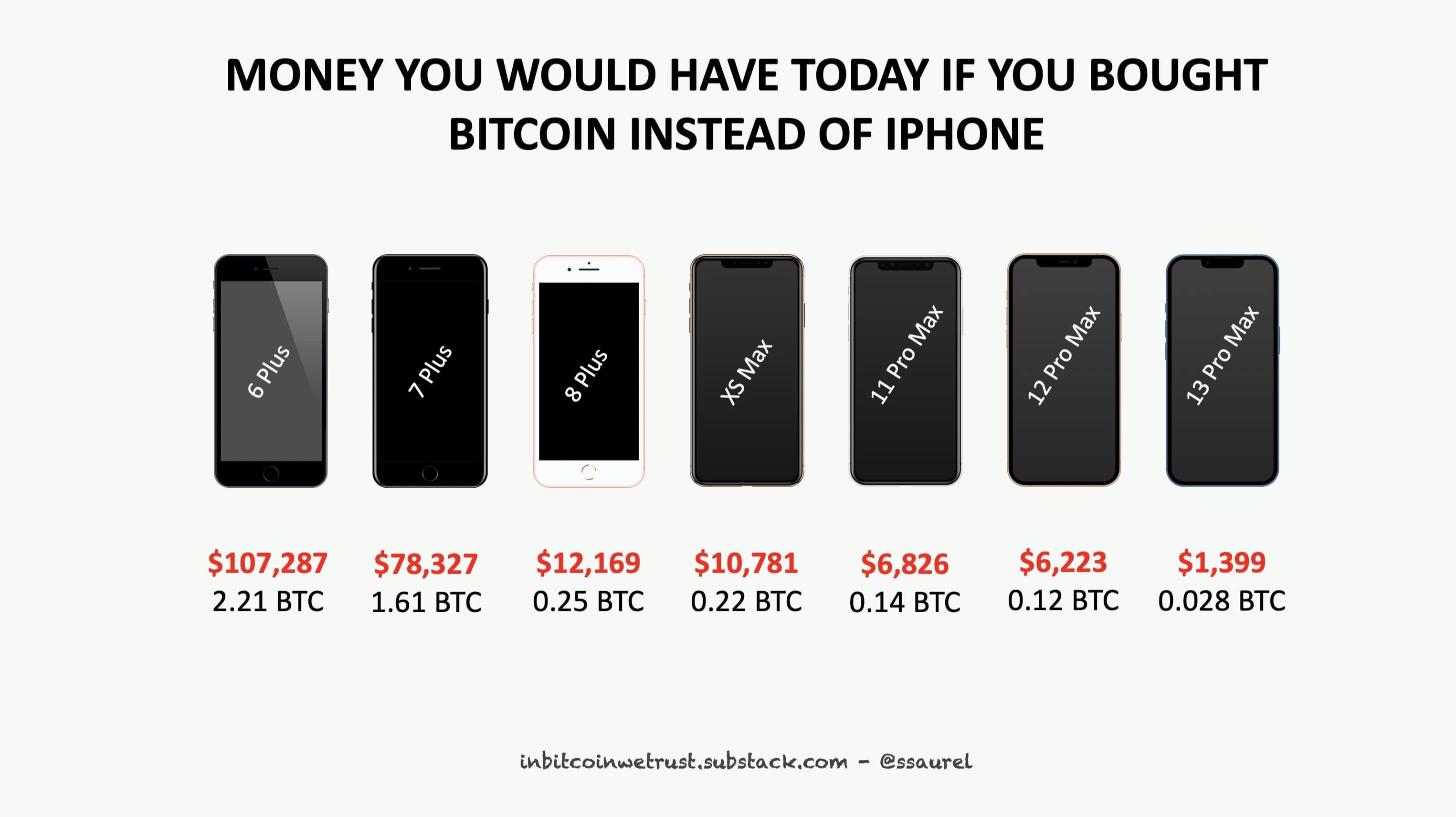 As is customary in September each year, Apple has just introduced the next iteration of its flagship product: the iPhone. We are now at iPhone 13, and Apple continues to use a well-thought-out strategy to continue to make record profits year after year.

While the iPhone 13 doesn't bring any new major features, many Apple fans are likely to fall for the flagship of Tim Cook's company once again.

However, rather than buying a brand new iPhone, there is something much smarter to do in my opinion. I might even call it a strategy to employ. Instead of buying an iPhone, you could invest the same amount of money in Bitcoin, and be patient.

The numbers don't lie. Buying Bitcoin instead of an iPhone is a much better strategy

I had fun looking at what those who would have adopted this strategy would have at their disposal today when the price of Bitcoin is around $48.5K.

You'll see that the numbers are quite edifying:

Released in September 2014, the iPhone 6 Plus was then sold for $949. At the time, the price of Bitcoin was $429. If you chose to buy Bitcoin instead of this iteration of the iPhone, you could have bought 2.21 BTC.

Today, the iPhone 6 Plus is not even worth half of its original selling price, while you would have the equivalent of $107K with your 2.21 BTC.

With the iPhone 7 Plus released in September 2016, it's almost the same thing. You could have acquired 1.61 BTC at the time, which would represent the equivalent of $78K today.

The significant increase in the price of Bitcoin during the 2017 Bull Run changed that. In September 2017, you could have had 0.25 BTC buying Bitcoin instead of an iPhone 8 Plus. Less than on the previous two iterations, but you would still have the equivalent of $12K in your possession today.

The funny thing is that even with the iPhone 12 Pro Max in September 2020, you would still be making an incredible amount of money by having opted for Bitcoin instead of a mobile device with little difference from year to year.

This might not seem like much to you initially. However, if you can be patient, in a few years your earnings will likely be comparable to those who chose to buy BTC rather than an iPhone 6 Plus in September 2014.

That's the power of Bitcoin. This incredible monetary revolution makes you aware of the vicious circle in which the current system informs you. This system where it is impossible to save the fruits of your labor has been complemented by a consumer society that pushes you to constantly want to buy completely useless things.

The Apple iPhone is the very symbol of this system that you must leave to take control of your money future.

The best way to leave this fiat system is to opt for the Bitcoin revolution. What I have just shown you about not buying a new smartphone every year can be applied to many other products and services in your life today. If you make this conscious choice, you will make a fundamental difference to your future regarding money.

It all starts with awareness, and I hope this story has helped you open your eyes. Now it's time to take action. It's up to you.