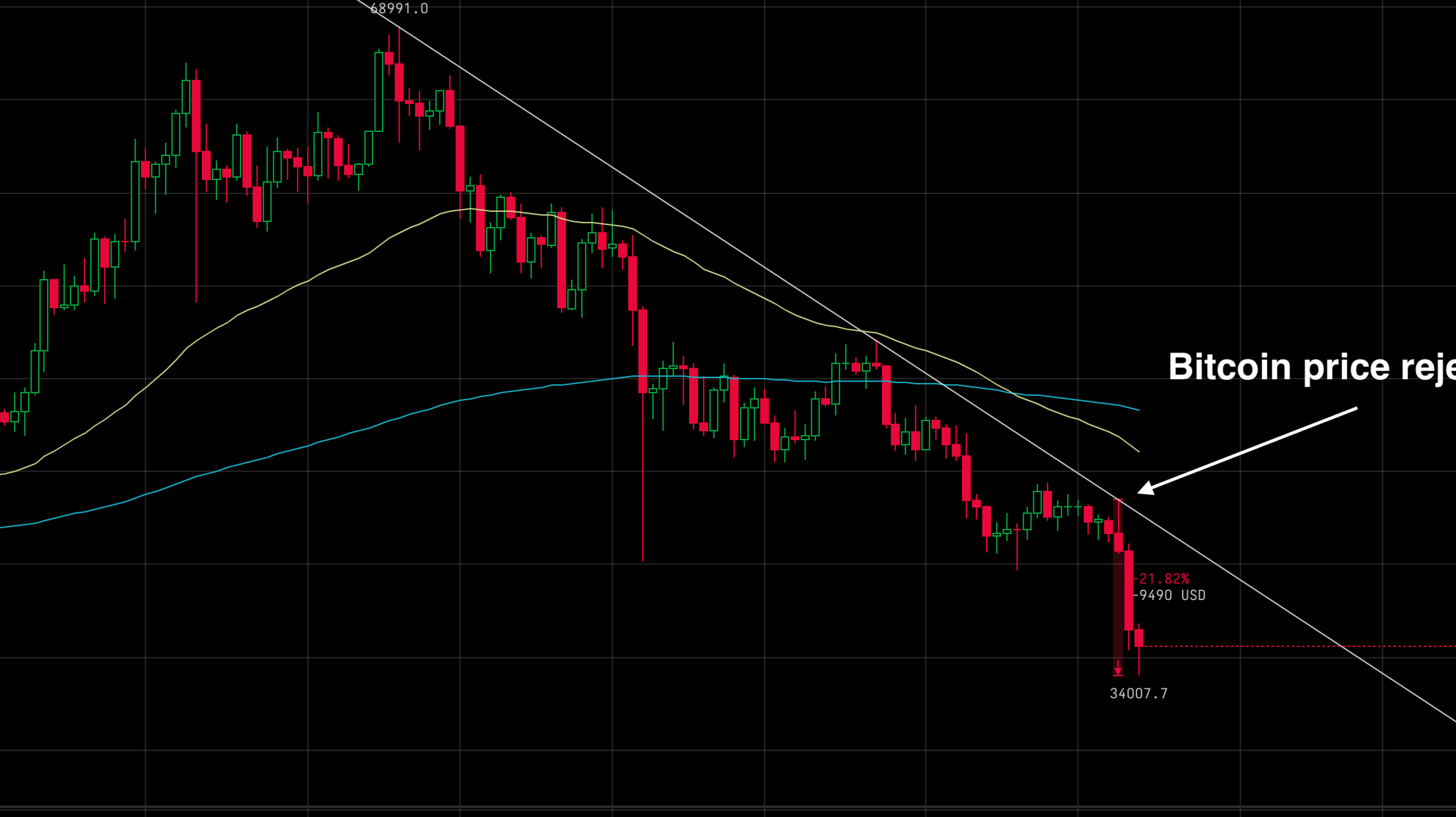 The days go by and look alike for Bitcoin right now. Massive liquidations are taking place and the price of Bitcoin has just bottomed out below $35K at $34.3K. More than $1.08B of positions have been liquidated in the last twenty-four hours on the cryptocurrency market:

For Bitcoin, liquidations reached more than $376M over the same period:

Logically, it is long positions that have been mostly liquidated:

As I write this, the price of Bitcoin is $35.4K, down almost 50% from the ATH of November 2021. Everyone here is wondering if a Bear Market is imminent, or if we are already there. For that, nothing better than to stick to the 8 indicators that I detail here:

8 indicators to watch for Bear Market

This will give you an idea of my opinion on the subject.

The important thing to note here is that the significant drop in the price of Bitcoin comes against a backdrop of massive selling in all liquid markets. The S&P 500 has fallen heavily in recent days and is now below 4,400 points:

A low since the middle of October 2021. At the time, a major correction had taken place on the financial markets following the Fed's announcement of the tapering that was to come, and why not, as early as November 2021. It was as if Wall Street was sending a message to Jerome Powell.

The message in substance: no, we don't want your tapering. Not at this stage at least.

The Fed finally gave in by postponing the extent of the tapering. This allowed the S&P 500 to set new records above 4,700 points. Today, the same type of situation is probably happening. Wall Street is still sending a message to the Fed as the latest FOMC meeting minutes suggest that the Fed could raise rates to four times in 2022.

More than the rate hike, it is the end of liquidity injections and the beginning of a tightening cycle that the markets do not want to accept. We will see how the Fed reacts in the coming days to these movements in the stock market.

All markets are affected, while gold is also down:

Volatility on Wall Street is rising sharply, which is the only certainty I gave you for 2022 on the financial markets two weeks ago:

Sylvain Saurel’s Newsletter Here Is the Only Certainty You Can Have Right Now for the Stock Market in 2022 Inflation, or rather the word “inflation”, has been a key topic in the financial markets in 2021. Throughout the year, investors were worried about the arrival of high inflation. All along the year, Jerome Powell and Janet Yellen did their best to reassure everyone that inflation would only be transitory at worst… Read more 13 days ago · Sylvain Saurel

Now the big question is what will happen in the days and weeks to come. Of the three major potential scenarios for the price of Bitcoin in 2022, I had told you about what is happening now as a possibility, and this would seem to indicate that we are currently heading for the Bearish scenario, the path of the max pain.

Nevertheless, be careful not to panic and jump to conclusions. Bitcoin is rather in the middle of an iceberg illusion in my opinion. If the price of Bitcoin is worrying, the real signal is to be found once again on the side of the Bitcoin revolution, which is getting stronger block after block:

The fundamentals are strengthening, but that is not stopping the price of Bitcoin from collapsing at the moment, as the majority of players in the spot market are taking a short-term view at the moment. Those with a long-term view are strengthening their positions and accumulating more BTC for the long term. As a result, BTC reserves on trading platforms are currently at a 4-year low.

The current situation is not unlike the one observed between May and July 2021:

A 50% correction with the max pain path borrowed by the Bitcoin price as each time. It is at these times that your strength of conviction is tested:

Sylvain Saurel @ssaurel The max pain path will once again be the one taken by #Bitcoin. The opportunity to test your strength of conviction in his revolution.

The survival line for the current Bull Market is the support at $30K. This support held up in January 2021, and even more so between May and July 2021. I also think it will hold this time and that we will have a major bounce occurring. Many now imagine that Bitcoin will go to $30K and probably even lower after that.

However, the price of Bitcoin has always accustomed us to do the opposite of what most imagine. In the current situation of extreme fear, those who believe in Bitcoin will accumulate more. A short squeeze is coming. This view is reinforced by the overwhelmingly negative funding rates:

The market is currently oversold. It is therefore an opportunity to be seized. The important thing is not to panic and sell at this point in the cycle. It's not in your best interest to do so. But again, that's just my opinion. Better days are ahead and you have to accept that a free market will do that from time to time. That is part of the game.

Finally, one last word to conclude. If you are not a trader, you have no reason to panic. Your goals are long term as I already explained between May and July 2021. The current period is an opportunity in the same way as Bitcoin's Black Thursday was in March 2020 as I wrote at the time:

It's pretty amazing to imagine that I could write the same thing today in January 2022, when the price of Bitcoin is 7 times what it was back then.

Rather than inflict this on yourself continuously, detach yourself from the price of Bitcoin and go enjoy your weekend doing more interesting things. This will help you to be more relaxed. Most importantly, you'll avoid letting your emotions take over. This is the key to being patient and enjoying Bitcoin.