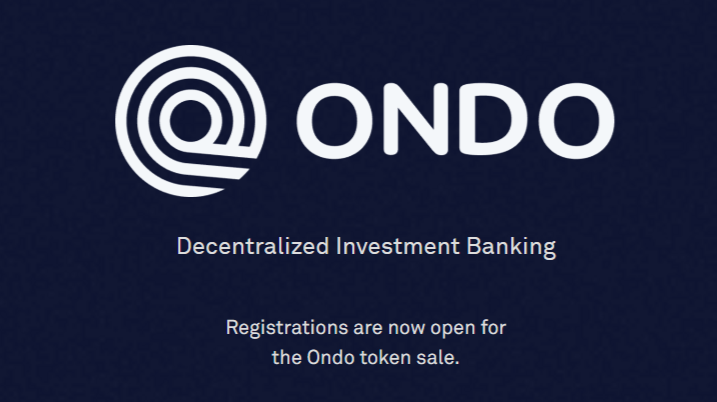 Well well... it has been quite some time since we have seen a CoinList crowdsale! And this next one in the middle of May is quite an interesting one as well.. Now, normally, I'm more interested in the back-end stuff and the infrastructure sorts of projects that are offered but I would be foolish to turn down an early sale of any project that is offered through the vetted process of CoinList.

This one intrigues me quite a bit... despite being a DeFi sort of dApp... and a DAO to match. Normally, these sorts of hype things don't really interest me. But this is an really interesting fusion of traditional and decentralised finance that seems more like an experiment in progress... and that makes me crazily curious to see how it works out! A decentralised version of investment banking? I'm definitely interested in seeing what Ondo Finance turns out!

So, to start off... the three principles of the project.... They do sound in line with decentralisation and crypto in general. However, I've always thought that a balance between completely decentralised and centralisation is the way to go. So, I have mixed feelings about these things.

Code above Legalese... well, yes. Sort of of... although, I would argue that in some ways, that code IS the new legalese, in that most people that interact with it don't actually understand it, and require some interpretation... thus offsetting the trustless idea. I'm also, not a real fan of "code is law' principle that sometimes gets bandied about. Think JUNO and HIVE... code is law, but the governance (people) are a layer in charge of that.

Products owned by the people... again, no problem in general. The devil is in the implementation. Now, it investing is a tricky business... and I'm not really convinced that a token based DAO is going to do much better than blind luck and/or an indexed fund. I mean, most managed funds don't really perform better than the index anyway...

Products for the people... again, in principle, yes. The accredited investor thing is a mixed protection and exclusion. It makes sure that you have wealth to lose... but it gatekeeps the opportunities to those who HAVE the wealth already! Mixed feelings... too many people have lost too much on crypto, investing unwisely and rashly in risky products beyond their financial stability.

So... investment banking, but decentralised is the name of the game here. This is quite unique at the moment, as it packages up traditional investment opportunities that would normally be out the reach of retail investors into smart contracts and tokenised products with a range of risk/reward profiles. Thus, allowing retail investments to have some exposure into these otherwise gated products and opportunities. It appears that the investment inputs range across traditional VC and hedge funds through to crypt protocols, and down at the lowest level to direct retail investment via smart contracts. So, possibly a one stop shop for many types of investors of all shapes and sizes to gain exposure? The key highlight that caught my eye was the fact that Ondo has not needed to rely on reward incentives to attract liquidity. These airdrops/reward incentives often result in a sharp wall of liquidity that is chasing stupid high yields... but the tokens are often farmed and dumped... and there is little attachment to the protocol itself other than as a free money making machine. When a new protocol launches with higher APR, the liquidity dries up and flees! This is definitely unsustainable in the long term, beyond enriching the early holders of tokens. So... to be able to manage a large TVL without rely on this illusion is something that is worth mentioning! Just a single round this time... and it is at a shitty time for Australia. Middle of the night wake up for me... Hopefully, there is a priority queue that isn't borked so that I only need to be awake for about half an hour in the dead of night!

Hmmm... this is an interesting little bit. Extra 2 percent unlock depending on demand... and also a second private round at a lower price... I'm hoping I make the cut for that! Now, the interesting part of this launch is the long 12 month lockup... and then the is an additional global lockup that is only released upon a governance vote! Assuming that the distribution is spread out... then this second global lockup holds the team to account for actually producing a product (but it appears that they have been working in stealth for over a year now....). ... and finally, your friendly VCs that invested a bit earlier than you... and will be looking at some way to recover some of their investment? A familiar band of names there!

So... a DeFi protocol and one that is also a DAO. Normally, that wouldn't be anything that would be that interesting to me... even though I would still try and take part in the sale. However, this is the first project that I've heard of that tries to meld the traditional and decentralised forms of investing... and just for that, it is worth taking note of (for me...)! I'll be setting my alarm early in the morning!