2018 was a year many involved in the crypto asset space would like to forget. After the great bull run of 2017, crypto asset prices could not maintain its upward trajectory and had a major correction. Prices for most crypto assets fell anywhere between 70% to 95% from their All-Time-High. Total market cap dropped by 78.85%, in the midst of that, crypto asset thefts amounted to over $867 million. Draining info I guess?

For clarity's sake Hydrogen’s purpose is summarized below:

Hydro allows private systems to interface with a public blockchain. It’s a hybrid private-public model that enables financial services platforms to leverage the dynamics of a distributed, transparent, and immutable public ledger. The project focuses on particular areas where this can add value, such as authentication, identity management, document security, transactions, and artificial intelligence

The first three months looked more like a deep sitting parabolic curve (market cap, price, and volume). Hydro had its highest market cap of $29.7 million in Jul '18 barely three months after it started trading on exchanges. By this time the project was beginning to gain traction and get noticed, as it was listed on more exchanges. It is important to note that the time of its highest market cap is also the same period that BTC had its sharpest recovery in price from the Jun-Jul slump.

The following three months between Mid Jul-Oct can be described as the thick of the bear market, as the price of Hydro fell trailing the price of BTC, but looking at the chart you’ll observe that Hydro had the highest trading volume within the same time, meaning that prices were down but investors were beginning to see the future in the project thereby leading to more accumulation. It’s uncommon in the crypto arena to see volume increase in the face of falling prices. The case was different for Hydro token, although no obvious growth in price was seen, the market price was relatively stable from October till the end of the year. News of partnerships, exchange listings, and increased community engagement by the decentralized ambassadors further strengthened the staying power of the price from sliding deeper. 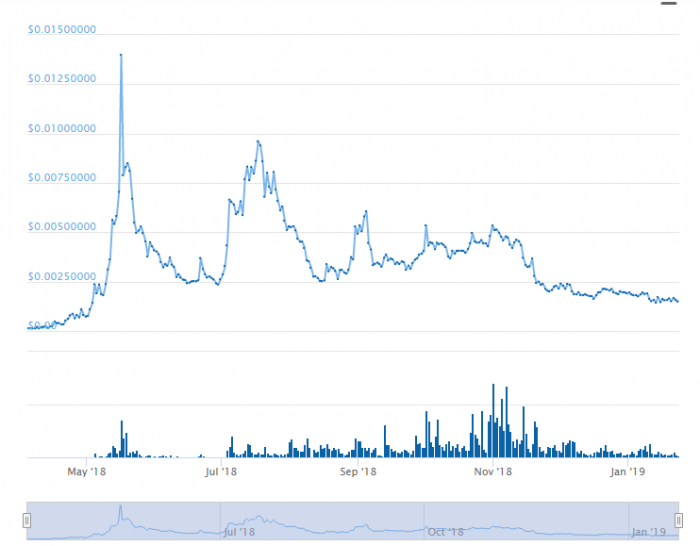 Within the second trimester, the price of Hydrogen ranged between $0.0074 and $0.0015, rendering a compound monthly growth rate of -23.08% and an extrapolated compound annual growth rate of -0.96%.

NB: Hydro didn’t have an ICO, tokens were airdropped to developers.

Looking at the broader picture, Hydro has grown 41.20% since it first started trading, which means early investors are still in profit. You’ll observe that the charts from two different coin ranking sites have similar price movement as seen above. From a trader’s perspective, Hydro has had about 33.00% winning month of its total trading age of 9 months i.e. All the months where it had a positive trading result.

An average daily volume of around $500K may be considered good for a new project that started trading right in the midst of a bear market. While the price of the token may not be so high now, most of the community members believe that there’s still room for growth, especially that it is still young- with more releases of the different phases expected, and yet to be listed on the very popular exchanges where more money will flow into it. It is important to highlight at this point that the team at hydro does not believe in paying to be listed on any exchange, instead, they believe that exchanges big or small will get you listed because you have a token that brings great value to the market.

It is incredible to compare the hydro graph in 2018 with the graphs of several ICOs. Despite not having an ICO to raise funds, Hydro is relatively stable, while most went straight to the ground.

The lifetime trading chart for HYDRO at a glance can be likened to the experience of climbing up a hill to see the world or to be seen by the world. Price gravity and general market sentiment are taking a toll on the price of the token, but it still shows more bullish than bearish tendencies with news of upcoming partnerships and the snowflake phase nearing release any moment from now.