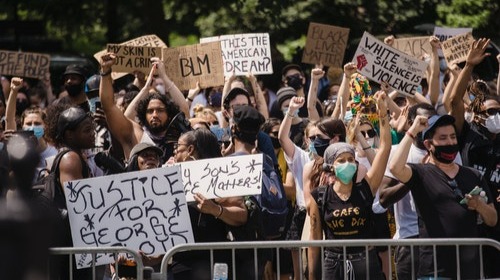 Dear White People, Let Me Whitesplain Fascism, Racism and Police Brutality to You

Considering I created In Defense of Feminism and adding to it has become increasingly difficult/unmaintainable without a dedicated editor, I thought I'd do one for literature and videos covering racism, police brutality and related topics. Some of the links are duplicates from that list because of the maintainability issue.

Now, I fully realise the hypocrisy/problematic nature of being an ill-equipped white man with my own racial biases trying to help other white people with theirs (the drunk leading the drunker). But I'm hoping that I can use my privilege and desire to be a saviour to help other white people who genuinely want to learn and be better (without trolling/energy vampirism) to do that without putting the burden on BIPOC who're beyond tired and battle fatigued of being asked to help us when you/they don't want to. I appreciate/respect your position if you're angry at me for doing this; you didn't ask for my help and might not want it. I'll probably blunder without realising it and need to be told off for it. Fair enough.

Well, it's not really whitesplaining. More having a single writing to echo/signal boost others' messages. Most of these links/recommendations I didn't source myself. I am grateful to various members of the fartloaf community (in and outside of the #BlackFet and Distinction of Deviation groups) for taking time to write about the issues faced by American Blacks, when they had no obligation to and have enough of our shit to deal with without our laziness added to it.

Note: I have not read all of this myself. I am working through it as time, emotional energy and finances allow. It's a work in progress. Expect edits to add/remove items.

"One of the most popular misconceptions about Black history is that over time, America has gradually become less racist and more tolerant. That is not true."
— Michael Harriot (@michaelharriot on Twitter)

"In a racist society, it is not enough to be non-racist. We must be anti-racist." — Angela Davis; Actress

"Racism is so ingrained in American life that merely suggesting tackling it makes you Unamerican." — Unknown BLM protester

"Racism is a white [people] problem. It was constructed and created by white people and the ultimate responsibility lies with white people. For too long, we've looked at it as if it were someone else's problem, as if it was created in a vacuum."
— Robin DiAngelo, author of White Fragility: Why It's So Hard for White People to Talk About Racism (see below)

The following books have been recommended by some of the users of Fartloaf, in and out of the #BlackFet and Distinction of Deviation groups (including on my writing of the same name there).

I tried watching "C.S.A." I just couldn't. After about five or ten minutes, I was disgusted and felt ill. How anyone could possibly think that slavery (and I'm not referring to the consensual, risk-aware fetish kind) was acceptable or a good thing in any way (or be proud of that history), I don't know.

I am not interested in comments intended to insult or spread hatred. Anyone doing so will have their comments deleted and will be blocked at my discretion. If you want to point something out to me or make a suggestion, please keep it civil. Thank you.

Please do not thank me. I am simply echoing the voices of those people from whom I have learned. If you want to show support, please show it to them by reading their writings and boosting their signal. Tips from this post, if worth drawing out, will be invested in cryptocurrencies that support BLM. Black lives still matter.

"Yesterday, I was clever, so I tried to change the world. Today I am wise, so I will change myself." — Rumi

"Every time we turn our heads the other way when we see the law flouted, when we tolerate what we know to be wrong, when we close our eye and ears to the corrupt because we are too busy or too frightened, when we fail to speak up and speak out, we strike a blow against freedom and decency and justice."
— Robert Kennedy, brother of John F. Kennedy