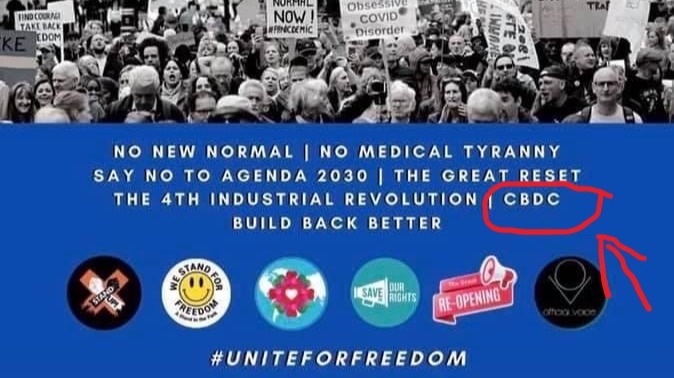 CBDCs Are Not Welcomed. CBDCs Are Rat Poison and DEFINITELY NOT CRYPTO

When I first heard of this great reset and new normal that we're supposed to go through, so we can free ourselves from Covid I smelled something fishy about it. There have been plenty of signs showing that this virus is just a catalyst for the elites to impose a new world order and we're kind of witnessing it becoming a reality.

Plenty of people around the world disagree about the numbers thrown at us regarding this pandemic and most of them have realized that it's all part of a plan. Hence there are protests around the world against measures that governments are trying to impose to us and there's gonna be one in London on Saturday April 24.

Below you have the banner of the march and something interesting caught my attention at it. In the right corner down, you have one of the threats people are marching against and that's CBDCs. 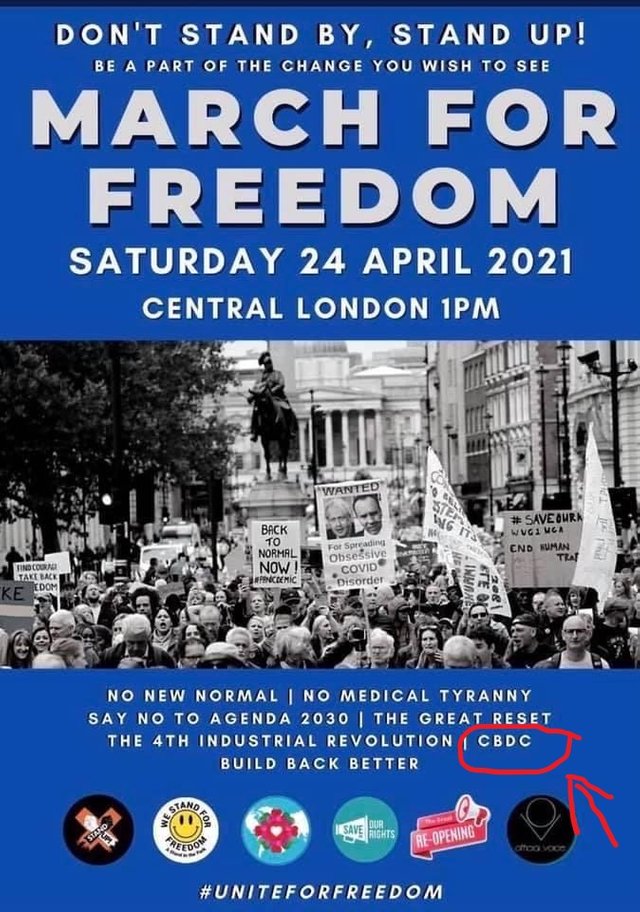 Yes folks, the so called cryptos that plenty of crypto media outlets dedicate that much time writing about are on the list of threats against humanity's fundamental freedoms and the British are going to talk about them on April 24 and march against them as well.

CBDCs are not crypto, have not been designed based on the decentralized blockchain technology and crypto fundamentals and will never have the pedigree of cryptos.

CBDCs are worse than money as we know it. They'll offer even more control to governments over their citizens and are the total opposite of what cryptos have been designed to do in the world. I simply don't understand people accepting such poisonous concept and the ones not trashing it. I will trash CBDCs on every social media platform that I am be able to do so.

CBDCs are just a tyrannical tool that's supposed to be used by governments to be able to control their citizens almost completely. When you have a central entity such as these governments that will issue these currencies, a total control over the closed network that will operate these currencies and the power to switch off accounts, then it's bye bye time for any fundamental freedom humanity has had.

When the only currency to be used in the world will be a CBDC, or more, and its use will represent one's survival in the society and access to food, services and so on, we're gone be drowned in total slavery. Period. No one can convince me of anything else...

That's when the only chance humanity has to stay free is for merchants all over the world to start accept crypto and show the middle fingers to governments issued digital currencies. These governments have as much power as we allow them to have. If we allow CBDCs to become a reality in our daily lives, we're screwed.

Once the chain will be locked around our necks it will be almost impossible to break it. If I were a crypto media outlet I wouldn't even dedicate a post to promoting CBDCs. Those are rat poison and the only thing that makes sense in the world right now, seeing how corrupt and evil governments have turned, is crypto.

Call me a fanatic or how you will, but humanity is at a turning point. We have crypto and blockchain on one side and CBDCs and an enslaving system on the other. Which one will you choose?