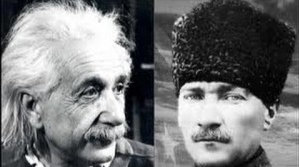 Mustafa Kemal Atatürk declared the republic on 29 October 1923 with the aim of a modern, democratic and independent country based on the sovereignty of the people.

Mustafa Kemal Atatürk's appreciation of the state based on the sovereignty of the nation and democracy was appreciated by important people all over the world.

One of the important people affected by the establishment of the Republic of Turkey, the world's leading scientists Albert Einstein.

Albert Einstein, September 17, 1933 in the mentioned his admiration in a letter sent to Mustafa Kemal Atatürk and the Republic of Turkey's laws should be freer from Germany, arguing that it is a democratic country, 40 German scientist had requested permission to do the work for the Republic of Turkey.

This request of Einstein was politely rejected by the prime minister of the time, İsmet İnönü, but upon the introduction of Mustafa Kemal Atatürk, scientists were invited to the country.

After this date, a portion of the scientists has begun to come to universities in the Republic of Turkey , but Einstein went to the United States by accepting the offer made by Princeton University.