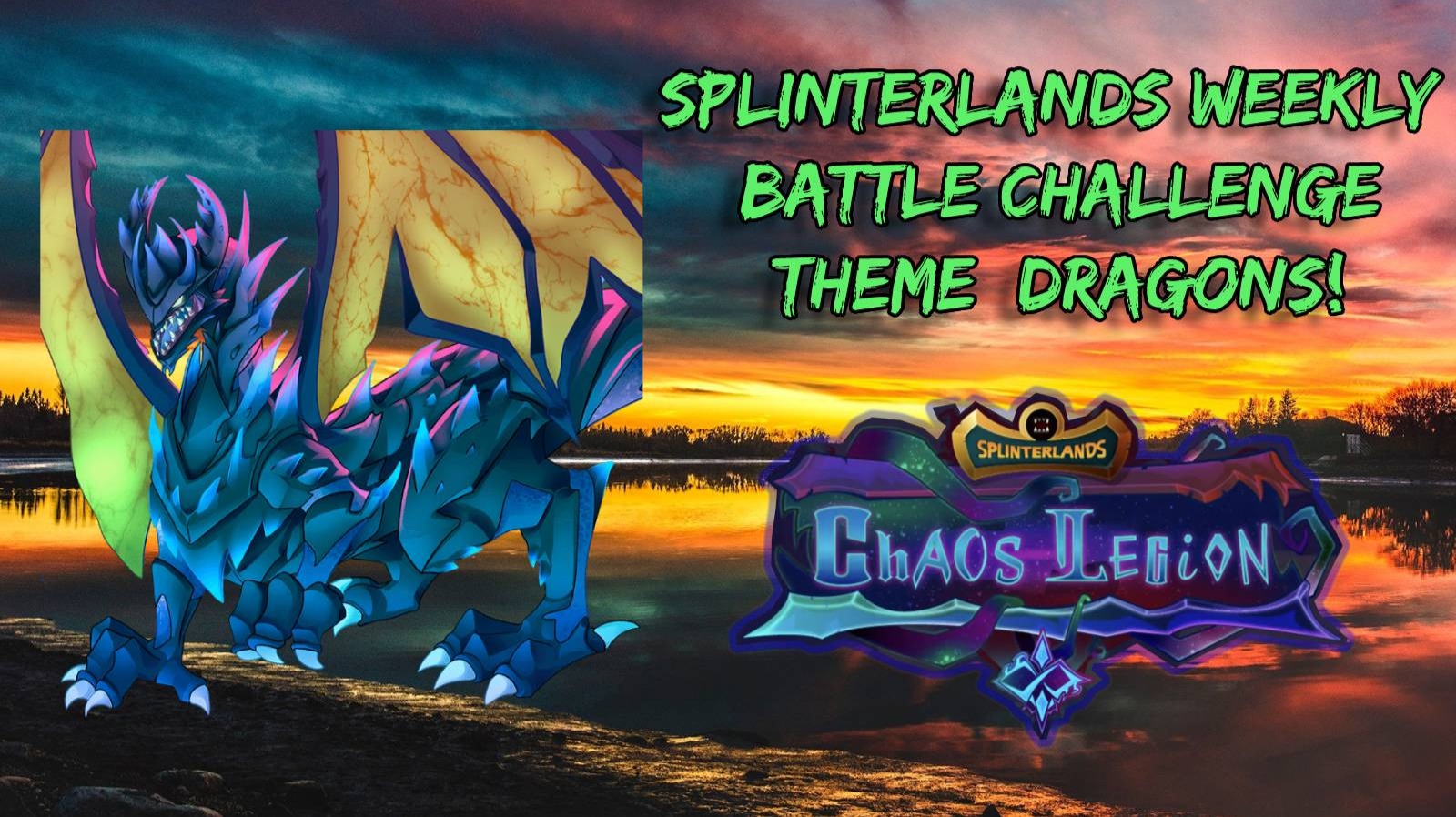 A big thank you to Devon Rockola on Pexels for the background image!

So this weeks theme for the challenge is everyones favorite mythical creatures - DRAGONS.
Now that I think of it, ever since the time I was playing Heroes of Might and Magic 3, I have always liked Dragons. Like any kind - Golden, Green, Black, Green, any kind. But since the introduction of Chaos Legion I think I have found my new favorite kind of dragon - the Chaos Dragon, cutting it close with Desert Dragon, but today the star is Chaotic. Lets take a quick look at his stats, shall we:

This is simply an amazing card, and in my humble opinion - a must have for any deck. Personally I have yet to purchase one of my own, but I must share my admirations for this monster. I think it has it all: 4 armor to pretect from melee and ranged attacks, an amazing 10 hp, a decent 3 speed, and right off level 1 - 3 magic damage, the Flying ability, cuz DUH - Dragon make him a perfect fit for any Earthquake match and as an added bonus - Scattershot. But thats not all - at level 2 he gain the Blast ability which kind-of doubles his overall damage output. Only downside is the high mana cost - 14, but use him in high mana battles and thats not a problem. At levels 3 he gains Blind, which, cough, I have yet to see in a match, and a 4th point in damage at 4.

A little earlier in the day as I was playing some games to get rating to climb to G3, I was thinking about the new Chaos Legion dragon cards I have to buy, and more specifically, as I am a fan of the magic damage monsters - the Chaos Dragon. The deadly combination it would be to get in a high-mana matchup with a level 2 Desert Dragon and a level 2 Chaos Dragon - amazing! So I decide to rent a level 2 Chaos Dragon just to test it out abit /with my water deck - oshannus, nerissa, etc/ and see how it goes. Long story short - it doesnt go well, lol. Some time passes by and imagine my surprise when I am presented with the following ruleset:

Right away I just thought - I'm effed. As there aren't almost any (useful) ranged monsters in my fire deck, no melees can be used. My heavy archery team is Life, heavy magic - Earth, balanced - Water. But then it struck me - CHAOS DRAGOON! So quicky I go to rent a level 4 Delwyn Dragonscale so I can use it to boost the damage abit and use the level 2 Chaos Dragon and this is what I can come up with: There are no melee monsters allowed in the match so I have to look for a summoner that boost ranged or Magic. I dont have strong ranged monster in the teams so I go for Delwyn Dragonscale For a main tank I have to choose something with high-ish hp or some protective stats. Thats why I decide to go for Lord Arianthus, rented ofcourse. He is only 5 mana, but on level 2 has all you can want - Shield, Void and Magic Reflect plus a very good 8 hp. Next up I decide to put in Chaos Agent, not that he is strong, but only to fill up the mana and eventually to Dodge a Snipe shot. Next - Djinn Apprentice. The only reason he is here, is because I wanted him to evemtually soak up some damage until the next cards can do their job. Also - 2 magic damage and 4 hp for 5 mana. Good deal. Next - ooze. Again, no mana left and the slow is always nice so we can attack first. Next - another rent for me, which comes in handy in this matchup - the Zalran Efreet. The 2(+1) base damage will make him Life Leech for 2 points each round. The Cleanse is a bonus to clear Lord Arianthus if something bad happens to him. Lastly, the star - Chaos Dragon. As I said I had him rented earlier in the day just to check him out, but with little to no success. Now this match I decide to put him in the last position just to try and maximize his damage output, utilizing his Scattershot ability. With the 3 damage if he hits a target not in the end he will do a whopping 8 damage each round. Good theory, lets see what happens.

If you dont feel like reading, you can always just watch the battle by clicking here. For the rest of you, lets begin: So the battle begins with the enemy Fire Elemental blasting away my Chaos Agent, how rude.. I am angry! But then Chaos Dragon attacks and takes revenge on Goblin Chariot and blasting 2 damage to the enemy Djinn Apprentice and 2 more to the bad Fire Elemental. Justice is served (with a double kill)! Next Zalran Efreet kills off the Scavo Chemist and the enemy has 2 less damage, as *Cornealus joins the battle in the first position. Supply Runner tickles Lord Arianthus. Lastly in this round the Djinn Apprentices attack, the enemy get 1 damage reflected to his face, and we deal 3 damage to Cornealus Beginning this round I am so confident that this match is won and nothing can really happen so we can lose it. Chaos Dragon attacks and lands yet another kill on the enemy Djinn Apprentice, blasting 2 damage to Supply Runner and Cornealus. Supply Runner takes 1 more hp off Lord Artianthus and we manage to get Cornealus down to 1 hp. Not much happens this round, except that Chaos Dragon scores another double kill on the enemy team and the battle is won. So with this victory I manage to get to 1919 rating (again). Lets hope it will stick.

I don't have much to say on my end for the battle. I think I managed to get the most out of the deck I currently have (rented and owned). I do have to point out that I cant understand what was the point of Cornealus in the second position. I can understand using him there if he could heal himself for 4 hp each round to act like some sort of a tank, but with the Healed out ruleset, I just cant figure it out. Perhaps he also couldn't find anything better to add.

Anyways, thanks for reading my rambles.
Any advice won cards that would be more useful in this matchup I would appreciate to let me know in the comments.
Have a fantastic weekend. See you next week, everyone!