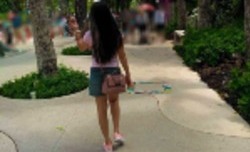 It’s a beautiful sunny day in 2017. Like normal days of a working mother sitting inside a jam-packed bus. Wide-awake she already mastered how people deal with their early morning routine inside it. That morning is unlike in nature. And she knew that a little favor can help or maybe not.

A man in his 50’s and a young boy about 9 or 10 years old caught her attention. They are sitting near the back seat of the bus. When the conductor asks them for the bus fare there is a little discussion but she can not hear well. It’s like they don’t have enough money to pay the fare for their destination. They don’t look like a beggar like she sees in public vehicles or streets asking for something. Maybe they are just struggling with money at that time as they dress decently and they look nice.

The man keeps dialing on his mobile phone but looks like unable to contact anyone. Once in awhile will text messages and dial again. The woman sitting on the back seat pretends like listening to music from her mobile phone and you know “the walls have ears”. The man keeps hugging the boy and she can see that the boy is not feeling well. The boy shivers and he seems to have colds.

The woman’s heart was touched by those hands embracing the kid. Giving him comfort and letting him know everything is alright “I’ve got your back”. This may be normal and can be seen anywhere but looking secretly with those two eyes gives her a sign to be kind even once in her life. The scene for her is like a magnet she can not ignore. A voice inside her telling she can do a little favor from her end but don’t know exactly what it is. She started to look for a vacant seat to go near them. Fortunately, she was able to get a seat across them but hesitant to sit beside them because she is timid. There’s a lot of people inside the bus and she doesn’t want to make a scene or heard by someone asking anything to them. She needs to do something now because she almost reaches her destination.

She reached her station and stand up. As quickly as possible she handed the man money, smiled and said: “ please buy him medicine and something to eat”. The man looks at her with surprise. He gets the money but unable to speak because the woman walks fast and gets off the bus.

The woman felt amazing, really good from her head to her toes. It is mixed emotions of comfort and excitement. The twinkle in the man’s eyes when she smiled on him and handed the money made her feel extraordinary and did something good out of nowhere. She walks towards her work walking on air. With a feeling of great pleasure and happiness!

I hope you enjoy reading all the contents as it truly happened anywhere and most of the time unplanned. It’s human nature that we don’t forget people that made us happy. Together let us spread love and light. Remind yourself "All is well".

Short story worth reading and sharing... Spread love and light....