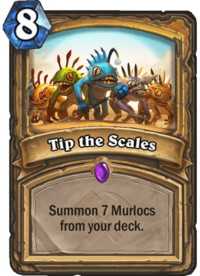 When I was looking through my blogging folder, I came across a series that I had long forgotten. I had only made one post in it. With the existence of @steem-ace, I should resurrect this series.

Recently, Blizzard released the Saviors of Uldum expansion for Hearthstone. Whenever a new expansion drops, I look to see if there are any adjustments to my existing decks. I mentioned last time that I am a casual CCG player. I find themes I like and I construct decks around them.

Are they great decks? Most likely not. Do they win enough games for entertainment values? Yes, they do. I usually hang out around rank 10 to 5 in any given season and am currently a Wild-exclusive player.

Back on topic, last night, I made some changes to my Murloc Paladin deck.

As you can see, this is not an optimized version in any way. It's more aimed at completing daily quests involving Murlocs than a polished deck.

After some quick browsing, I made the following changes:

Vilefin Inquisitor - Connecting it with Rockpool Hunter for a turn two 2/4 is nice. But, the Hero Power attached to it is usually anti-synergistic with your deck's late game plan.

Divine Favor - It's not that this card is not good. It's that other cards serve better when the playbook has changed.

Finja, the Flying Star - You don't need it when you have Tip the Scales.

Murloc Tastyfin - Keeping your hand fueled better than other alternatives.

Prismatic Lens - Given the high cost of spells in this deck, it will most likely be beneficial each time you cast it. The cost reduction on the spells increases the burst damage potential.

Tip the Scales - This is the fastest way to thin out your deck. Not only would it put pressure on your opponent, it builds up Anyfin Can Happen.

The only card from the new expansion is Tip the Scales. Most aggressive decks rely on the curve to overpower their opponent. Those decks take advantage of synergies and the snowball effects to win.

The strategy for this deck is thinning out your deck as fast as possible by putting presence on the board. Sometimes, you get the lucky high roll with Prismatic Lens on Tip the Scales. Again, this deck is in no way optimized. The choices made here are more stylistic than for performance. I can think of at least two cards everyone else would put in here instead of Avenging Wrath or the Mauls.

I call these "better options" because they would make your deck more robust and harder to beat.

Zephrys the Great - The "no duplicate" rule is not hard to meet as you would go through the deck rather quick. Zephrys will often find you lethal under the right conditions.

Chef Nomi - Again, given how fast you go through your deck, it is not difficult to satisfy the "empty deck" condition. Nomi's board is not easy to clear for non-control decks.

Toxfin - Useful to get through tough Taunts or minimize casualties.

Fishflinger - Board presence and extra card in your hand. Unless you are playing a Murloc mirror, the chance of it benefiting your opponent is slim to none.

Sir Finley of the Sands - Finley will give you extra damage from your Hero Power. I would say all of them except for Shaman's help with your damage output.

It is my belief that an aggressive deck based on Murlocs does not need tech options. It is simpler to move on to the next game than to win out obscure situations. Loatheb is about as far as I would go in terms of preserving your board from AoEs.