CANDLE: THE POWER OF THE FLAME
MyCryptoOutlook2022 BitYard Contest and Giveaway - $1,200 in ETH Prizes! >> JOIN FROM HERE << 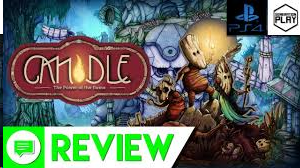 CANDLE: THE POWER OF THE FLAME

Nintendo Switch is still a relatively young platform, though it has been on the market for about two years. The beginning may have been uncertain, but players like the console and the same can be said about developers. Nintendo has also improved its support for independent creators, resulting in a number of smaller, independent games trying to find a new audience. And in many cases it comes out. While on other platforms the game could fit for a variety of reasons, there is a chance to shine again. This is also the case of the Candle: The Power of the Flame by Teku Studios, which originally appeared on PC 2 years ago and is now here again.

Yet you may not have heard of it yet. There is not enough space at the gaming exhibitions, in the gaming media, but there are still several aspects that can get you, whether at first glance or after a little deeper research. It can reach you with a truly unique 2D art style. You can reach the story of the unconventional hero you play in the game. And he can also convince you of his mythology, which speaks of the origin, but also of the destruction of the world, and he will try to drag you into the opening minutes of the game. It is only understandable that then you will want to know more about this world.

Candle gameplay may not be a completely traditional adventure genre, but it doesn't mean that the authors are very experimenting. The gameplay is that it combines classic adventuration with inventory, use and combination of items along with platform elements. Overall, however, it must be admitted that the elements of the classic adventure game are much more here, and just walking around the world is animated by a little more represented platforming, where you have to watch your falls and also crawl obstacles. This is also reflected in the controls that have added jumps, but you have to plan to get the right spot (and not die while falling elsewhere). Platforming, however, is not as dynamic as in traditional jumping games, so it does not spoil the adventure game. At the same time, the game is difficult to control, which is a bit dull. Inventory is traditional adventurny, so you call it one button and browse the items in it, to which you have a description, but here is not to help you in some way, rather deeper lore of this world, even in small things, such as coins or keys. You also combine inventory items, and I have to praise the fact that even if you have more to collect, it is still easy to use. In addition to inventory, you will often drill on the gaming world map, which is extensive and rugged, often navigating between sections and also using teleports and other options to move to other places.

What makes Candle even more different from the rest of the competition is the mechanism of light that the game uses to a great extent. Because Teku can light a flame on one of her hands, it could be said that she turns it into a candle. Plamienok has two functions - ordinary burning and light burst. You will encounter many situations where you can move on with these abilities. The bottom line is that you see in the dark like you would expect. But with the help of light, you can also activate different panels, even at some moments to scare off enemies under certain circumstances.

However, you need to protect your light. Of course, you will not pass through it with water that often crosses your path. And the light also has the disadvantage that it attracts the attention of members of the enemy tribe faster. You will face situations where, for example, you have to walk around someone unobtrusively, and that cannot be done with light. The game pushes you to find ways to get the light where you need it, even through obstacles. You can help, for example, with fakes and other objects that you can set on fire, and later, when your flame goes out for something, you will go back there to experience it.

Like any adventure game, Candle is based on logical puzzles that form a significant portion of content. But your impression of them will be inconsistent. On the one hand, they are really colorful, multi-layered and well-designed. It's definitely not something that could appeal to newcomers in the genre or people who don't like to flip through their synapses. On the other hand, it is obvious that Candle is the debut of Teku Studios and they do not have much experience with how to actually communicate the puzzles to the players, not to rave them and solve them in the end by using everything for everything.

I do not mean that at Candle every step should be a tool to solve the current puzzle. But again, he has no head or heel to find a solution with a shamanic character and their position in a completely unrelated place by several screens further. And this is just one of many examples that drag several hours across the game. If you take into account that the individual puzzles are relatively stretched, the same applies to their solutions. You run up and down between sites, trying to find some hidden little thing on the screen, or use everything for everything. It does not reward you, you do not have the impression that you have solved something with your skill, but rather happiness. And that's the feeling you don't want from the adventure game.

Ordinary adventure games do not bring a sense of acute danger when something really threatens your character. At worst, you get stuck somewhere. You can also die here. And you will die, too. In many ways. You will be killed by a fall, you will be killed by a frog, a huge rock will blow you up, and you will often be caught by the enemies themselves, who will not be deluded with you. Fortunately, the checkpoints in the game are relatively dense, so the game is ready for the player to die quite often. And while in some areas the game fluctuates, it excelled in the area of ​​fine art that is simply beautiful and charming. The whole world has been hand-drawn, reminiscent of beautiful watercolors, is incredibly rich in small visual details, and the aesthetics of indigenous tribes are also blended into all this. Likewise, the characters and beings you encounter will also be stylized. Nor is there a narrator with a truly charismatic expression that adds seriousness and a sense of reputation to the whole game. Music is also nice to play, although it is not just memorable, but it fits nicely with the moods and scenes that will open up before you. It creates the overall atmosphere and unobtrusively helps it out of the background.

Candle: The Power of the Flame is not an expensive game and you can even say that you will get a decent playing time for your money. This, of course, depends on your skill to a great extent, but you spend 8-10 hours here comfortably. However, the problem is that even if you would like to have fun playing the game all the time, it will not always be the case. At the same time, some elements are pulling the game down, which should work exactly the opposite. But it's definitely not bad for the debut, and you don't have to wait for the action because of the nice price. You just have to reckon with the fact that the game is rather challenging and not so good at using all its means of expression to present puzzles.