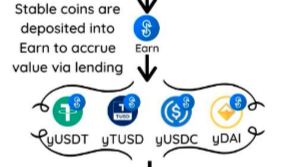 Introduction to yEarn Vaults and How the yUSD Vault Works

Yearn is one of DeFi’s most popular protocols. Their core product is the vaults. Vaults offer higher risks and greater rewards than their earn protocol. In this article I will explain how vaults work.

The vaults were created a few months ago with the advent of liquidity mining. When the Comp token was released, earning the highest yield was no longer about finding the best lender, like in the earn protocol. Rather, finding the best yields became complex as protocols were distributing new tokens which were hard to evaluate. This is why yearn’s founder, Andre Cronje, invented this new vault system. Basically the vault system would allow anyone from the community to suggest a detailed strategy, and the community votes on whether or not to use it. The person who wrote the strategy is compensated for making a winning strategy, so the vault system is essentially a way for the community to crowdsource the best strategy for a particular token.

In addition to the most-cutting edge strategies and high rewards, another attraction for DeFi users is that the vault system will save you a lot of gas and transaction fees. Since the vault will automatically move funds to the winning strategy, users needn’t waste gas swapping between strategies trying to find the highest yield. Additionally, you get the benefit of not having to explore every new opportunity that comes around since the community will vote on what the best strategy currently and will move its funds to it.

This regular change in strategy is one reason why vaults are riskier and more volatile. Typically the strategies that yield the highest APY also are risky. To be clear, vaults are riskier than the earn protocol. That is because the vaults interact with different protocols that exist within the Defi system. So if there is a problem with one of the protocols outside of yearn, it could impact your funds directly, so understand the risks. But on the plus side, vaults allow you to take advantage of the most-innovative strategies in DeFi without necessarily knowing the specifics of the strategy or having to move your tokens around the Defi ecosystem.

With that overview in mind, now I’m going to explain the most popular vault, the yUSD pool (also called the curve.fi/y LP vault).

The yUSD vault is a stable coin fund that accrues value from interest, swap fees, and demand for the underlying tokens. The yUSD vault consists of four stables: yDai, yUSDT, yTUSD and yUSDC. The yCurve pool allows you to swap between different y tokens. As an LP you get a certain yield from the fees that are generated, and you also generate the curve token.

This flowchart explains how the yUSD vault works:

For a more detailed explanation, stable coins are turned into various y stable tokens, then those y tokens which are deposited into the vault which will be deposited into the Curve pool (and on the back end they’ll become yCRV tokens, which represents your stake in the pool). As an LP (liquidity provider) you are constantly getting yield from the pool. That happens every time someone makes a trade between yDAI and yUSDC, for example, you get a small fee for facilitating that trade.This works out to be roughly 3% annually. As part of the Curve pool, you’re getting both lending fees and market making fees. In addition to the fees generated, the pool is also generating the curve token.

TL;DR you are making three different types of yield:

* You are getting interest from lending out your tokens

* You are getting curve.fi swap fees

All in total works out to be 90% annually, although this number changes every single day and it depends heavily on the price of the curve token and other variables. That is generally the strategy of the yUSD vault. I will explain the other strategies in the future posts. The inner workings can get very very complex but this was just the introduction to how the vaults work.

Now that you have some idea how the yUSD vault works…

HOW TO DEPOSIT YOUR STABLE COINS INTO THE yUSD VAULT

The easiest way to deposit is simply by using zapper.fi and selecting the ‘Y Curve’ Vault. Connect your Metamask wallet to the site and deposit your stables (see screenshot below, click the ‘Add Liquidity button).

Alternatively, if you have more than one type of stable token, vaults.finance can deposit several types of stables into the yUSD vault in one easy transaction.

I hope this introduction to vaults and the yUSD Vault has been helpful!

If you enjoy the content please consider contributing on Gitcoin. Your contribution goes A LONG WAY. $1 will be multiplied by 6x or more!