Crypto and social media were made for each other.  It’s a really compelling usecase for blockchain technology, because who wouldn’t want to be rewarded in some way for their online content?

Facebook is the fifth richest company in the world, true testament to the power of social media. Nowadays however, few would argue that their model actually benefits the users.  In fact, the user is the product, as their data is monetized, with not a cent given back to the user. Perhaps recognizing that it cannot exploit users forever and give nothing back, Facebook is dipping its toes into the waters of crypto with Libra, although due to regulatory barriers, it will be a long time before it's swimming freely.

Despite Facebook’s commitment to Libra, Twitter CEO’s endorsement of Bitcoin, and Reddit’s openness to tipping in crypto, there is still plenty of scope for experimentation, and new dapps are at the forefront, using blockchain to directly reward their users for producing or curating content.

There are few different players in the market already. Many of you reading this have probably heard of (or perhaps use) Steemit, you might’ve signed up for EOS’ yet-to-be-released Voice, or could have dabbled with less popular platforms like Minds.

(I’m reluctant at  this stage to include Publish0x as a social media ‘dapp’, as it does not run on decentralized blockchain tech under the hood, but rather gives users the chance to earn some crypto and cash out to their own wallet. In itself this a powerful thing and an easy way to introduce more into the cryptosphere without the steep learning curve of setting up wallets, storing private keys, etc.)

The issue with many social media dapps is they over-complicate matters, using complex voting and reward pools to divide coins among the users, which often results in disproportionate payouts and whale domination and manipulation, not to mention the mind-bending variable inflation mechanisms or coin burns required to keep the value of the platform’s coin stable.

However, one social media app that has caught my eye is Cent, which is taking a different approach.  It runs on Ethereum, and essentially works by tipping content you appreciate. With no reward pool, users are directly paying with their own funds, so the chances of earning many dollars for a post are slim.  However, it seems to be the most sustainable model, because rather than generating value out of nowhere, you self-fund your own wallet and tip accordingly. It’s basically a Patron-like model on the blockchain. 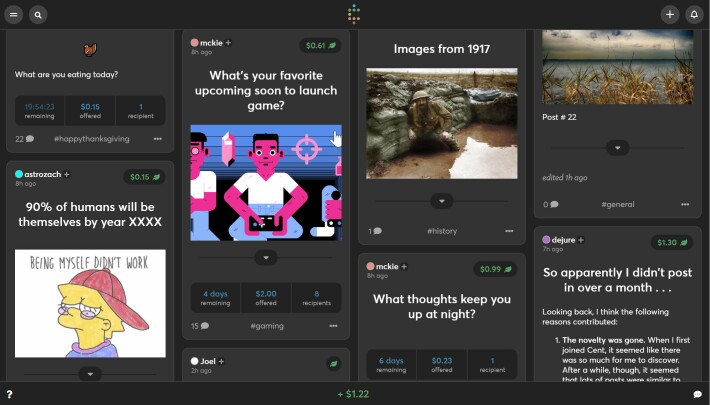 As a user, the sign-up process is relatively straightforward; no KYC or wait-list, but you will have to be familiar with the Ethereum browser wallet Metamask in order to connect your Ethereum address to your Cent account. I think this alone is enough to prevent widespread adoption, but for those willing to educate themselves and unafraid to explore new tech, it’s hardly insurmountable!

As soon as you're registered, you can start posting and voting on content, although you must transfer some funds to your wallet if you want to tip other users straight away.  Alternatively, you could start posting some thoughtful content, and the rewards will trickle in. Generally, if you avoid posting spam or very low effort posts you can expect to earn between 15c and a few dollars per post.  You’re not going to be able to retire on this, but if the value of Ethereum rises in the future, a few dollars earned now would appreciate somewhat.

One issue with the platform is that it does not have many active users (Cent says it has 40,000 users, although I would say only a few thousand would be considered 'active', while those who actually tip content is currently <100).  With that being said, it’s therefore relatively easier to make a name for yourself or carve out a niche, as the signal to noise ratio is lower than most other platforms.

The content is quite diverse, although skewed towards crypto and blockchain art.  The latter topic is very interesting, as a small subculture is springing up on Cent, using it as a platform to promote their art and get feedback on new pieces. In fact, Cent ties in quite nicely with digital art platforms like SuperRare or KnownOrigin, where digital artists tokenize their art and allow others to collect it.

For me, while consuming content on Cent is quite fun, and the creativity of users on the platform surprisingly high, the real power of the platform is found in a function called ‘Bounty’.  This allows you to create a post, then assign a few dollars to it in order to encourage other users to respond thoughtfully. The best answers receive a split of this Bounty.

This is particularly useful for gathering user feedback on new projects, and for a couple of websites I’ve created I’ve used this function.  You can spend between $5-50, and receive around 20-40 actually valuable and actionable pieces of feedback, typically relating to overall concept, UI/UX, bugs, new features, etc.  You could spend an awful lot more if you use alternative platforms or companies to gather UX/UI feedback.

Aside from feedback for websites, the Bounty function is a great way to incentivize interaction, and works for all sorts of questions or promotion of content.  If you want to guarantee a few eyeballs who will actually think about your offering, there is no better option (short of gathering all your friends and family in one place and forcing a presentation down their throats).

The general look and feel of the app takes some time to get used to, as it is by default set out in a card type arrangement, which at first glance looks rather chaotic and cluttered.  Depending on what topics or users you follow, your feed can become more personalized, and therefore engaging. If you are keen to earn a few dollars, you can filter by all posts with a live Bounty, and do your best to provide a thoughtful response in order to have a chance of sharing the bounty.

The future looks bright for Cent - there is a planned overhaul of the UI, and also tweaks to financial incentives in the pipeline, so the team is quite active and responsive to user feedback.  Ultimately, it’s a nicely designed dapp, with a small but growing and crucially engaged userbase. You can find some interesting discussions and nice digital art, and have a way to support your favourite users, earn a few $$s, and even experiment with Bounties if you’re willing to spend a bit of ETH.

I’m posting on there as @magpie - so check out my profile and give me a follow if you decide to join!

Tilling the fields of Defi