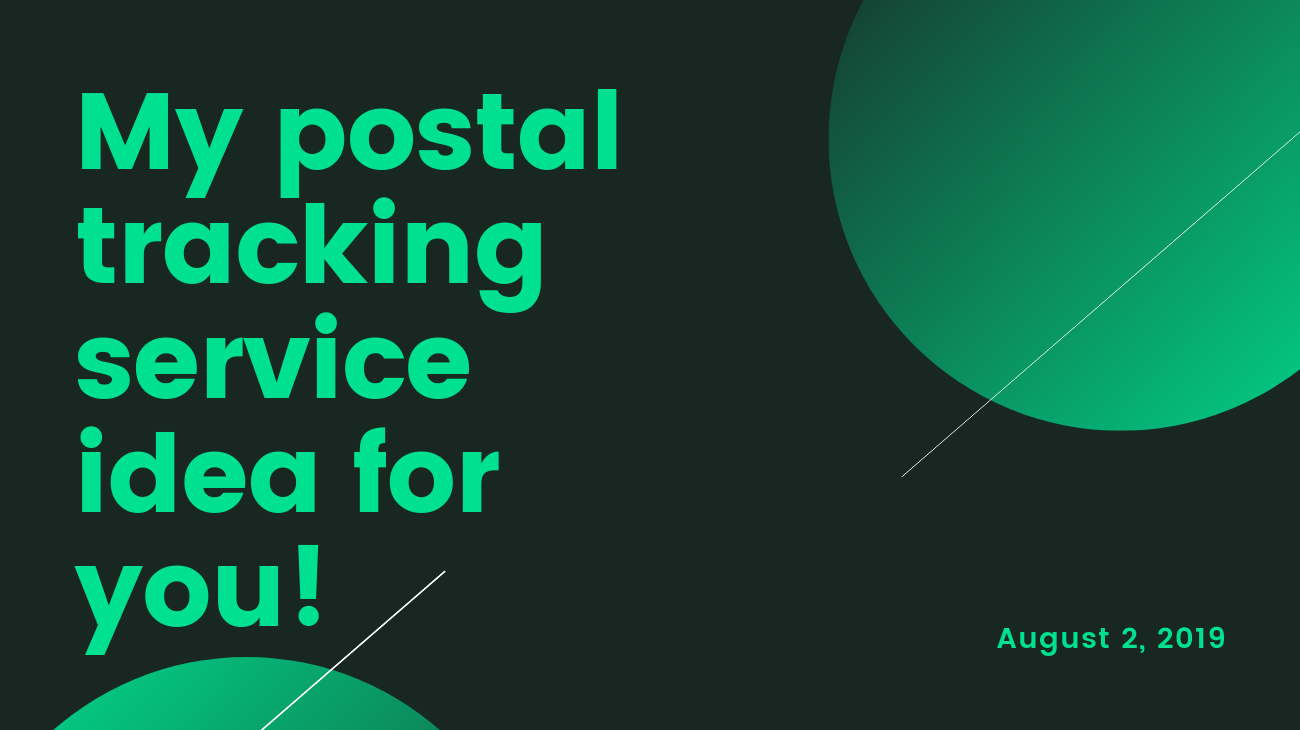 My postal tracking service idea for you!

So since i already have a lot on my plate with my ethereum DEX upcoming later this year i just wanted to share an idea i have been thinking about that could make world wide sending of letters and packages much better and easier to find for all of the different postal and parcel company's out there but i will leave it up to you if this will become something since it could be a big idea that could generate a lot more money.

We all know how big of a pain it can be with lost packages or finding out where the hell the package or letter is or that you can't find it because the one country doesn't support the same kind of tracking as your country so your package is off the radar as soon as it have reached your country and you have no bloody idea where it is or if it really is coming to your door or being delivered to your nearby postal office.

i'm from the EU and i have seen so many problems within my country and other country's where packages have been lost or you got no idea where it is and i'm personally tired off that my packages are being handled like it was something i got for free or not something i would really like to get.

You can argue on what really will be the best idea, but what if you had a blockchain system postal system for all of the world that you could sell off cheap to every service since all the data will run on a blockchain and the cost of running the servers wont be a whole lot compared to running a centralized system.

So every package and letters can be seen in the system where every printed letter will have a QR code or some sort of chip build in and a number so the person sending it can find it from that one unique number that letter has and packages having tracking ID's that you can find all over the world with any postal service website tracking so all information registered will be on one system and show the same information on all systems and still show up even tho the package have entered a new country.

well unless you know how to make a blockchain based system both for website and software solution for the devices the postman is going around with as well as the system used for the scanning of letters so people can see when the letter is at the location, if not i would recommend you to find a blockchain developer that knows how to code such systems.

This will of course not be the cheapest so you will somehow need to make an ICO or own a lot of money to fund it your self.

Make sure that the developer is a well trusted one since that there can be scamming developers out there that will build some sort of backdoor to get into the system and steal stuff.

How do you find one ? well there is a lot of freelance sites out there made just for blockchain solutions and you should look out for the developers that have a good rating for this kind of projects or at least well known for working for a big project. There is also a discord where you can find blockchain developers and pay them in crypto for their hard work.

I hope this could bring someone closer to start this project and it had enough information into it, if you know this is something you really want to start please tell me in the comments below so i know that someone could use my idea and it just wasn't a waste of time.

Do you like my writing? please consider tipping this post or send a small donation to the addresses below.