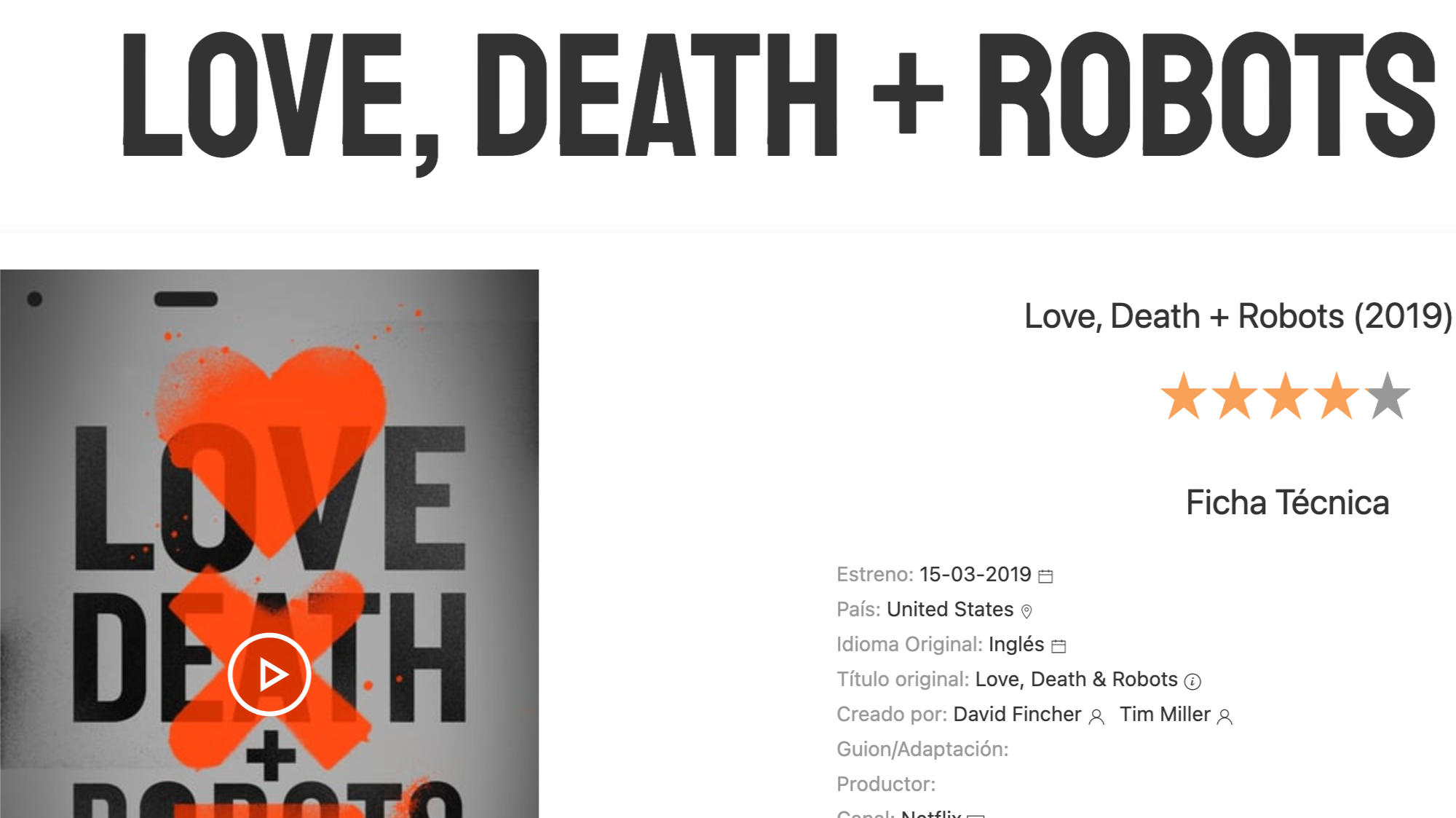 Today I'm bringing to you s special series: love, death, and robots. You can watch it on the Netflix channel. I didn't watch it until a pair of weeks ago. Somebody recommended it to me and I watched the trailer. I liked what I watched so I started to watch it and I'm here to recommend you this series. 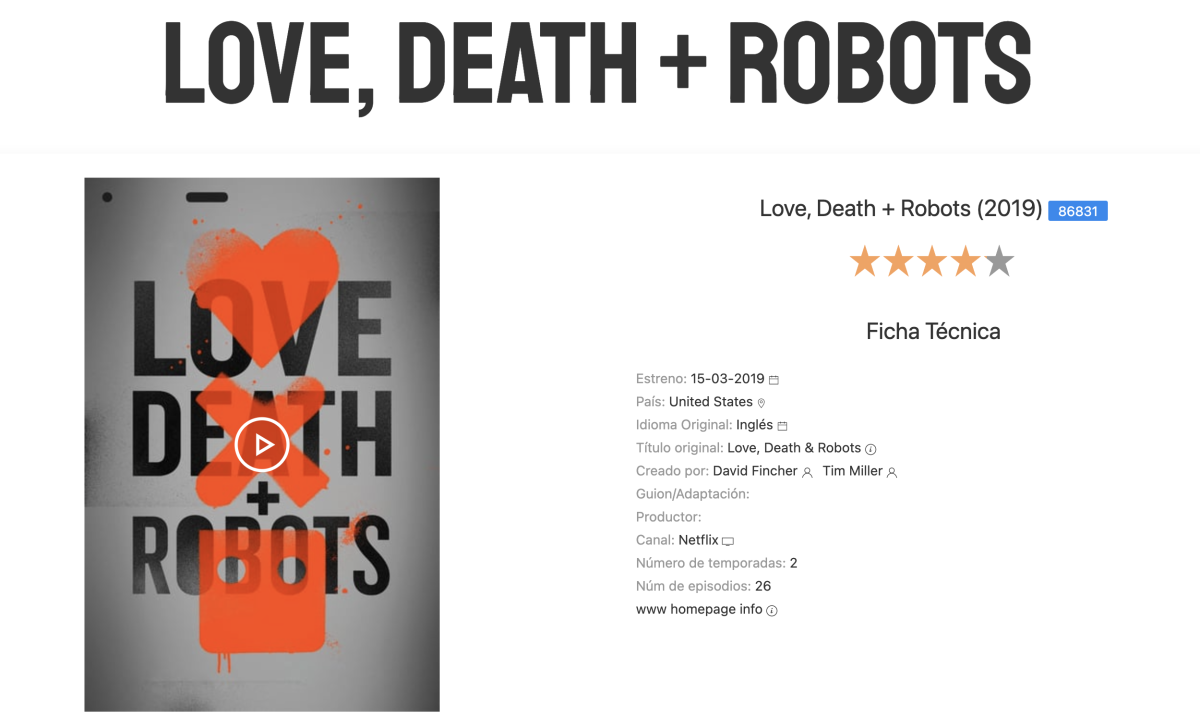 What's about this series?

It's not a regular series as you can watch on Netflix, it's a little bit different. But in which sense? The first season is 18 episodes, and the second is 8 but is not available yet. I'm going to focus on the first season. The duration is about 10 or 15 min on average, no more. The plots are different between them, are not connected. The episodes are short stories about... love, death, and robots!. Not all episodes are about robots, neither love nor death. It's a mix. The genres it's a little bit diverse: sci-fi, fantasy, terror, and comedy. The rating is for adult people, there is some sexual content...

Why is special this series?

For me what is special is the series are "anime" is not real people. The style is a little bit retro or vintage, which is really cool. I love it. It's one of the best Netflix bet for the 80's nostalgy. It's a little gem in the animation world. As people say about this series is "It’s a fascinating amalgamation of gut-based theatrics, controversial storytelling, and visual risk-taking"

Who is behind this series?

This series is created by David Fincher and Tim Miller. The first one is better known for directing "being John Malkovich", "seven", "Fight Club", "Zodicac", "the panic room", "Tthe Curious Case of Benjamin Button", "The Social Network", "The Girl with the Dragon Tattoo"... so with this curriculum vitae you can realize that the production at least is going to be good as average. Personally, I like a lot all the movies directed by David Fincher, so it's another positive point to encourage me to watch it. 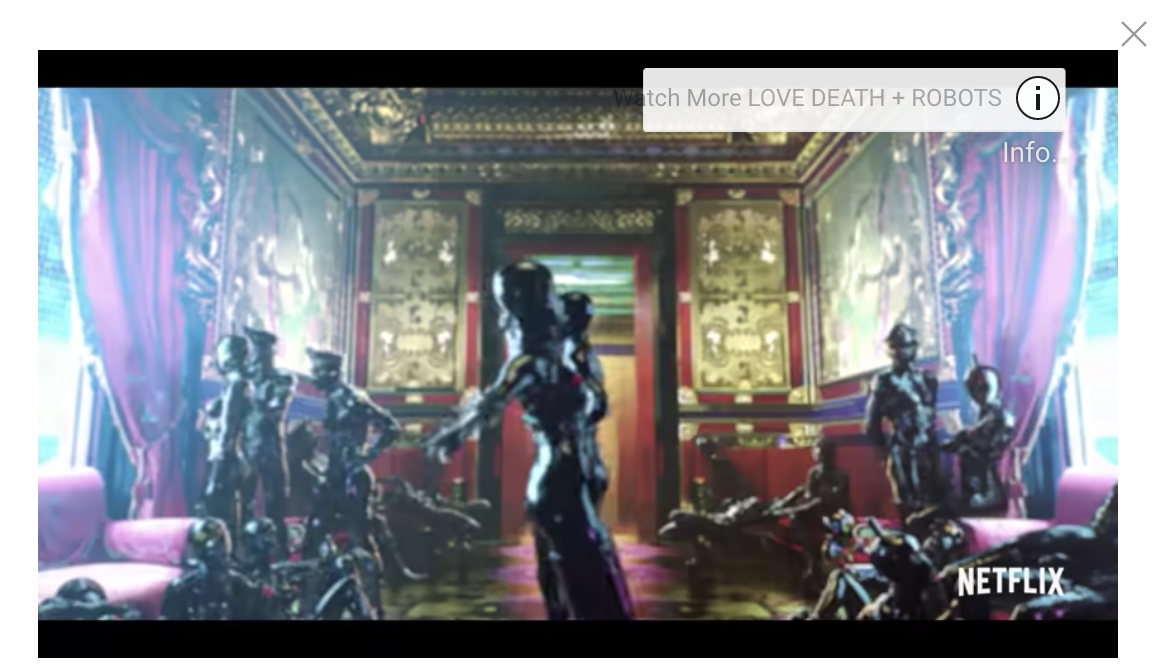 To be honest, I can't tell you more things than... Watch it!

The main goal of this article is only to recommend to you this series. The info here is only to introduce you to the series. You can find more details on specialized webs. Take the best of the article... stay possitive!

software engineer! currently developing the site https://estrenoscinehoy.com, visit the site to support me, Thxs in advance! :)

estrenoscinehoy: series and movies piece of news, and more.