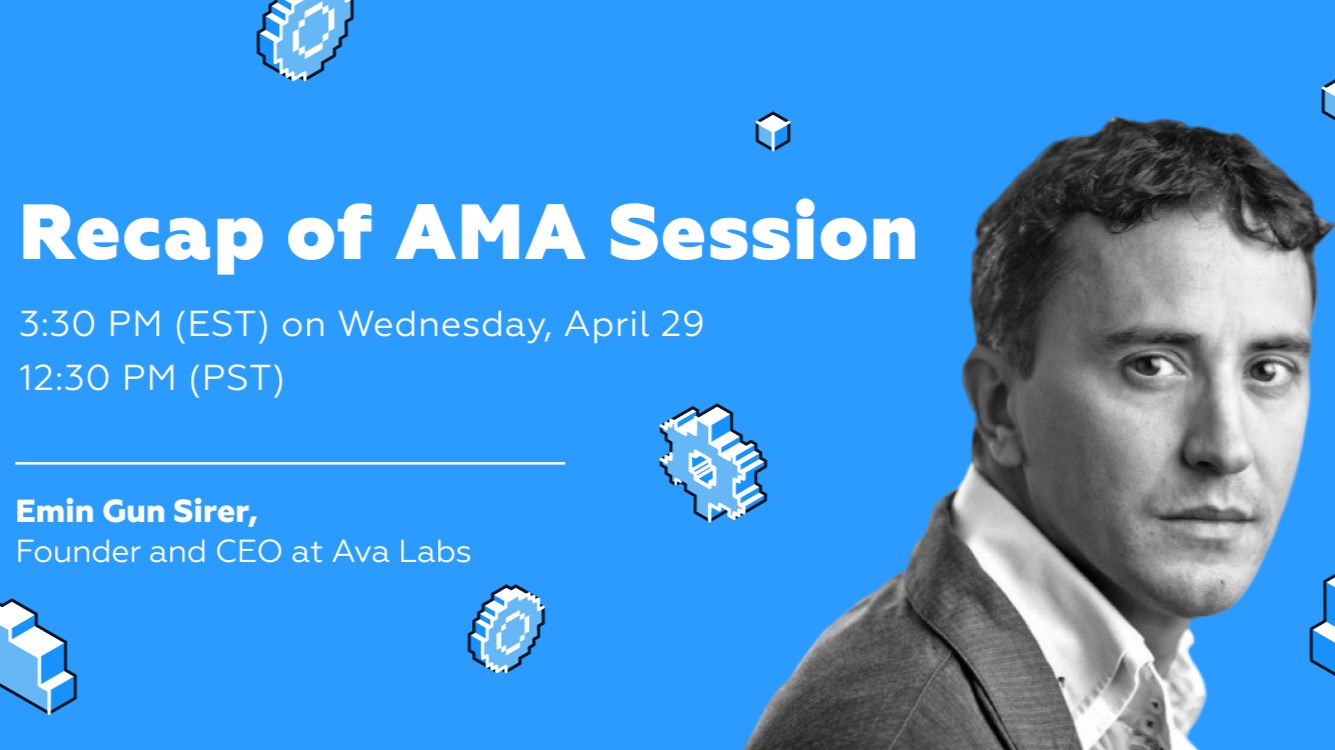 Here’s What You Missed At The Emin Gun Sirer AMA

Emin Gün Sirer co-founder and CEO of AVA Labs, and he was kind enough to join us for our latest AMA Heat session. He covered a lot of ground while answering audience questions, and we’ve rounded up a digest of his session below.

Read on to learn more about Emin, AVA Labs, and where he sees the DeFi space going.

How did you get into this world?

My involvement goes back to 2001, way before Satoshi. Back then we were dealing with the initial stages of P2P deployment. We were trying to get out these filesharing applications and were faced with a really big problem — everybody wants to download, no one wants to upload. Bram Cohen at the time was working on BitTorrent and his idea was to barter. If you want a block that I have and I want a block that you have, his idea was to bring us together.

My idea was that this is well and good, but what if I came up with magic internet money that was minted on-demand through some difficult process like proof of work? To enter the network you have to complete a difficult calculation, but then again you get some finite number of tokens. But you have to continue to contribute otherwise you’d run out of tokens.

This was a system called Karma, and as far as I know it’s the first implementation of proof of work in a setting that involves minting coins. The idea was too early. We had to wait until 2008 — the collapse of the global system — to see Satoshi’s idea come to life.

With world events keeping so many people at home right now, where does DeFi go from here?

Everyone’s going after the same model laid out by Satoshi. People have no vision, and often they have no technology. Everybody’s going after the dollar. Everyone wants to compete with USD. That’s where it starts and ends for approximately everyone. People are coming up with the silver to Bitcoin’s gold by changing one parameter. The vast majority of people are doing a money grab, People like Justin Sun are walking around like they have something special, but they’ve just recycled something that belongs to someone else. I hate the Bitcoin maximalist approach. 95% of this stuff is a money grab that doesn’t advance the world.

There are a lot of assets out there that don’t compete with the dollar. That’s the kind of thing AVA is going after. We’re not trying to compete with Bitcoin. It’ll go up, it’ll go down, but it’s not going to moon permanently. I see a great opportunity for the first system that can capture the digitization of assets that are on people’e books that are not globally tradeable via blockchains.

What’s your take on TON?

The rebel image is just an act. I’m jaded enough to look at this and say they’re working hard to distance themselves from their Russian roots. They’re a ginormous corporation that raised $1.7 billion. That’s not where I go for rebels. If you take someone money and don’t deliver something in a timely fashion, that’s a different kind of contract. The fact that Telegram found an opening to raise that money means a lot of people will be harmed and Telegram will bring undue attention to our space. The very first wave is full of hucksters.

We bring three things to the table. One is a new consensus protocol. Most people capable of this don’t do it. That’s why AI researchers pretend to be blockchain experts, and I don’t want to elevate them by naming names. All of those protocols are based on basic stuff that was worked out in the 1980s by my colleagues. That mechanism is so efficient that we can make decisions in under a second. I dare anyone to beat that. Our latency is so low you can interact with it in real time. We’ve achieved numbers as high as 19,000 transactions per second.

Second, we have a different network model. Every single existing coin copied their network model from Satoshi, brought no creativity to the system. Instead, we have a vision of one coin with many other coins on top. Each coin can come with its own virtual machine.

Third, we can save archival requirements for the next 50 years.

It uses the Avalanche consensus protocol and a super-streamlined virtual machine. Where most blockchains make decision one-by-one, AVA can make them in parallel all at once. If you have Crypto Kitties in one corner of the universe and an ICO in another, these two things need not be sequenced with respect to each other. Your ICO buy order doesn’t get queued up next to Crypto Kitties.

AVA runs the entirety of the Ethereum virtual machine. Every contract on Ethereum also runs on AVA, except it’s much faster. It’s not sharded.

We also have on-chain governance. Every other chain bakes into a code a bunch of things it doesn’t want to control.

Do you see DApps starting to take off in 2020, or are we still just testing this industry out?

I absolutely see an enormous future here. The amount of money in DeFi saw a big run-up a year and a half ago. The reason people went into DeFi is because they wanted passive income from their tokens. They went in high, didn’t want to convert their coins to cash, and they believe in the long-term future of Ethereum.

Now the rate at which new people enter DeFi has slowed tremendously. We also are seeing flash loans, weird cases that we couldn’t anticipate. The proper way to do this is to find stable platforms for issuing stable, trustworthy contracts that people can use.