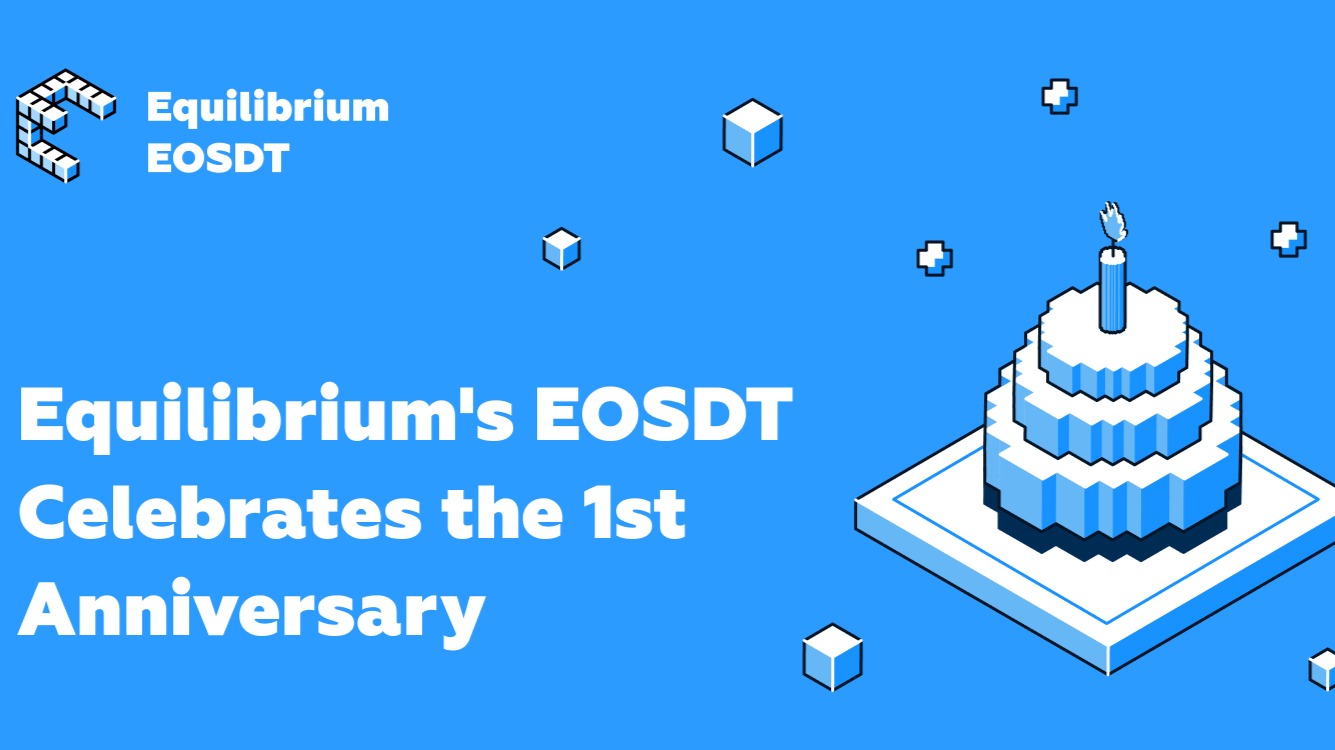 Equilibrium’s EOSDT celebrates its first birthday this week! One year ago at an EOS WORLD EXPO event in Starfish Community of San Francisco we announced the launch of our flagship product: EOSDT, the first EOS-based decentralized stablecoin. Since then, it has rapidly become one of the most recognized DeFi projects in the EOS ecosystem.

To celebrate our one-year milestone, we are happy to share the following highlights with our community.

Equilibrium integrated with Provable (formerly known as Oraclize) to provide our Rates Contract with timely price data in an on-chain manner.

On April 13, the EOSDT stablecoin was officially launched!

We launched Equilibrium’s on-chain block producer voting system so that the community could determine, modify, and vote for the key parameters that drive the Equilibrium framework. The system will be fully complete in Q3 2020 with the launch on an on-chain governance system.

At the beginning of fall 2019, we partnered with Delphi Oracle by EOS Titan, a contract that accepts trustworthy data from reputable EOS block producers and provides near real-time prices for the EOS/USD pair to other smart contracts or external users.

The Equilibrium team took some major steps October. We not only decreased the liquidation penalty and started a new referral program, but also reduced our collateralization requirement from 150% to 130%.

Equilibrium announced an on-chain staking rewards system around the Proxy Election. Our goal is of course to incentivize community members to vote.

Launching our Stability Fund has been one of our top milestones of the year. The Stability Fund consists of $17.5 million of EOS cryptocurrency that acts as a figurative insurance mechanism for EOSDT users to get their money back in case of a black swan event.

For one of the first updates of the new year, we launched our new system monitor: a dashboard-style web interface for conveniently displaying all relevant statistics and data about EOSDT: the total supply, a user’s collateralization level, and beyond.

Our overall plan is to become the first truly decentralized cross-chain stablecoin with multiple issuing centers on different blockchains. To that end, Equilibrium got prepared for accepting multiple forms of collateral after a successful system update.

The Equilibrium framework most recently freed its users of obligations to hold multiple assets to use the framework. Since March this year, users can pay associated fees in EOSDT instead of NUT, the system’s utility token.

From now users can expect a stable staking APR on their EOS holdings deposited on EOSDT smart contracts. Block producers on Equilibrium EOSDT proxy previously paid a fixed reward to EOSDT users that didn’t reflect any fluctuation in the size of the proxy. The 85% rate of daily payment that block producers receive thanks to our proxy will ensure that rewards are distributed more fairly: BPs will pay less if the proxy size shrinks, and they will pay more otherwise. This provides a stable ~2.45% staking APR to the users.

Where are we now?

We’ve come a long way since starting out 12 months ago. Here are our latest statistics: 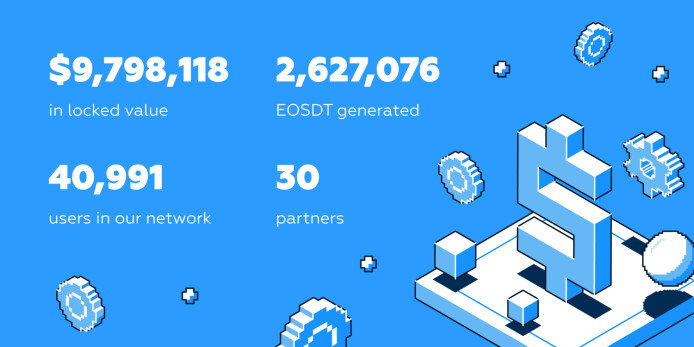 As Equilibrium kicks off its second year, we’ve got more than enough plans to fill our time. We’ll be further enhancing our network with new products, integrations, and features. Here’s a sneak peek at what we are up to:

Equilibrium is supporting the adoption of Bitcoin within the DeFi industry. In 2020, we plan an integration with pTokens, which will let users generate EOSDT in exchange for BTC.

Our multi-collateral interface and dashboards will feature strongly in our new web application. We’ve made them more user-friendly and easier to use.

Savings Pool is a new smart-contract-based product that lets users get an interest rate based on their EOSDT deposits. Instead of volatile EOS, the users will receive interest on a dollar-pegged token.

TON and Ethereum are among new blockchains Equilibrium is considering for integration. Stay tuned for more details.

There are more exciting product features to be released this year. Our goal is to turn Equilibrium into a one-in-all DeFi hub of interoperable products and applications.