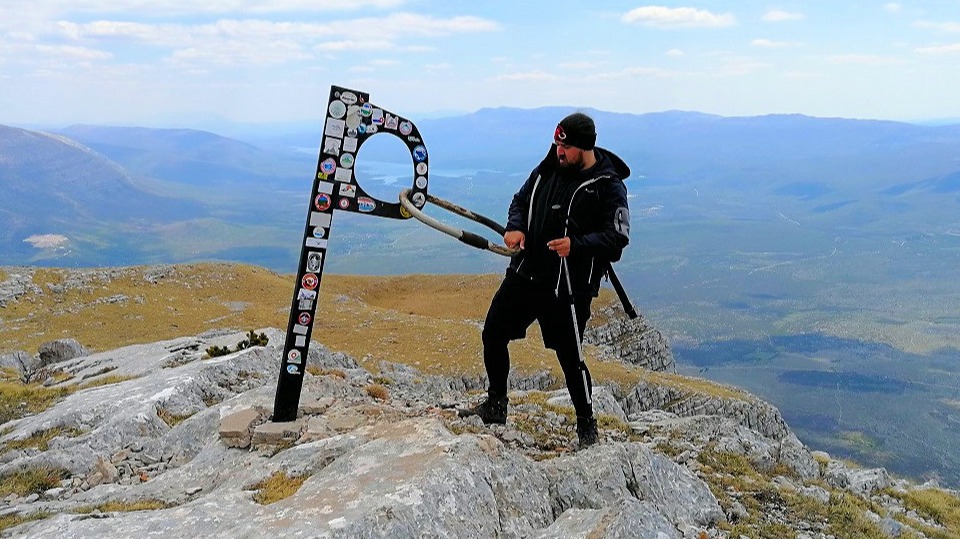 You Don’t Get Higher Than This!

At least not in Croatia! I have been waiting a long time to finally be able to say: yes, I was there, on the rooftop of Croatia, and it is absolutely awesome! Seriously, the situation is kinda like this: if you want to wake up in the morning, look into the mirror with pointing your finger saying that this is the man guilty of everything (bad) that is happening to you BUT also the man who considers himself even slightly a serious mountaineer, you have to visit the highest peak in Croatia.

Did you know that in Slovenia, for example, you are not considered a full-fledged Slovenian if you weren’t on Triglav, the highest peak in Slovenia? So, to make things harder on you, if you are unfortunate enough to be born in Croatia and you haven’t felt that good old „Vjetre s Dinare“ (English: wind from Dinara), then you aren’t considered a Croat, and please stop voting for the right-winged options and pretend you love your country. Thank you! Now, when we got past that, back onto the mountaineering devilry! 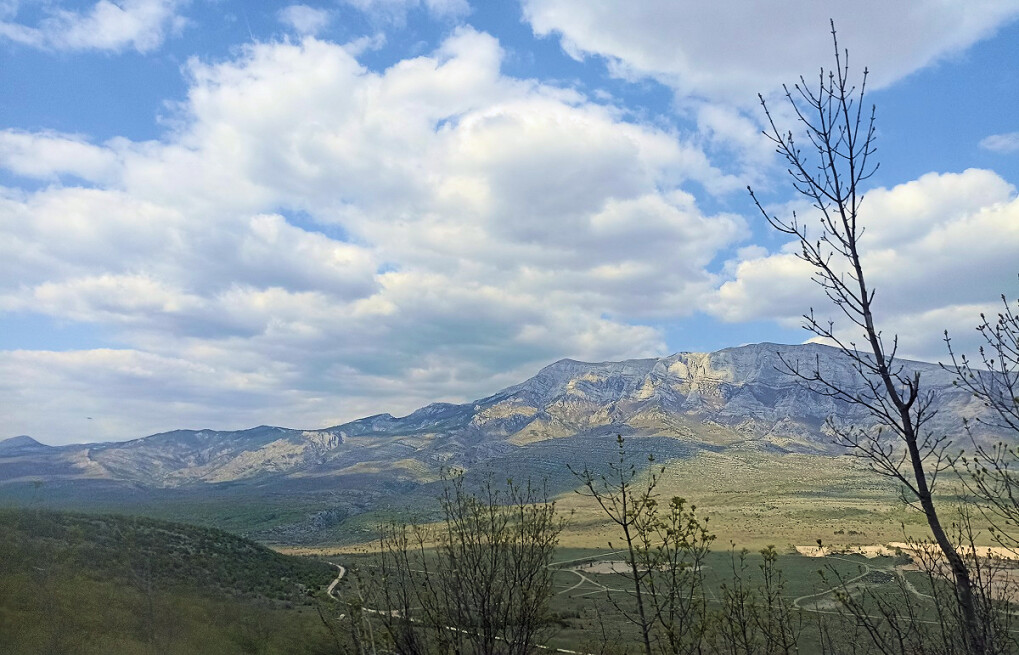 It is a three-and-a-half-hour car ride from Zagreb to Glavaš, a village near the city of Knin, with over three hundred kilometers under your wheels when you even start the climb. I strongly suggest you book yourself a place to stay over the night before and/or after the climb as it is slightly harder than your usual weekend hike at your local, alma mater, mountain.

There are some other options to make the ascend: the village of Mirkovići, Guge, and there is even a hardcore option, a super-Ferrata almost two kilometers long. I call it the FEARrata rather than Ferrata, a more suitable name. Currently, there are some parts of the Ferrata being repaired so it is highly advised to contact someone from the, I guess, local mountaineering association (Mr. Darko Gavrić, +385 91 7289 963).

We were told that the safest place to make the ascend from is the village of Glavaš. Believe it or not, military exercises were being held on the Knin side of the mount Dinara. They say it was the Americans. It all kinda sounds fishy but with the situation in the world going on, who knows? We did indeed hear some gunshots fired when we were making our ascend, on the other side, with a view towards Knin.

I could go through every part of the ascend in detail but I will let pictures tell the story, rather than words as I know, with some experience in blog writing, that the attention span of a human being today is being seriously trampled and decimated. But that’s why we have the pictures and paragraphs, god bless ’em! On the right, you can see the remains of fort Glavaš found right at the start of your ascend. The fort is also called Dinarić and it was built in the 15th century when it got obvious that the Ottoman Empire will turn its eye and foot toward Croatia. Wander around a little bit but don’t get carried away as there is a long way up still ahead.

There are not many checkpoints on the way up and be prepared to make long uphill distances through the rocky territory. I will break down the whole route for you later in the post. If not cloudy, it will get very hot so take a buff or a hat. And I beg you, take the sun cream or else you gonna burn and be too red to travel back home through Knin (hou hou hou, the right-wingers must be loving my political jokes). There is some water along the way, at exactly three kilometers from the start there is a well. Congratulations, you are currently 1000 meters high!

If you are making the ascend during summer, it is mandatory to take enough water with you (I read somewhere that people take around 5 liters of water, just in case, you know). Nevertheless, don’t be intimidated by Dinara and carry too much stuff with you. You will get up there for sure but it’s going to be much harder with all that baggage wearing you down. Steady as she goes and enjoys the ride! 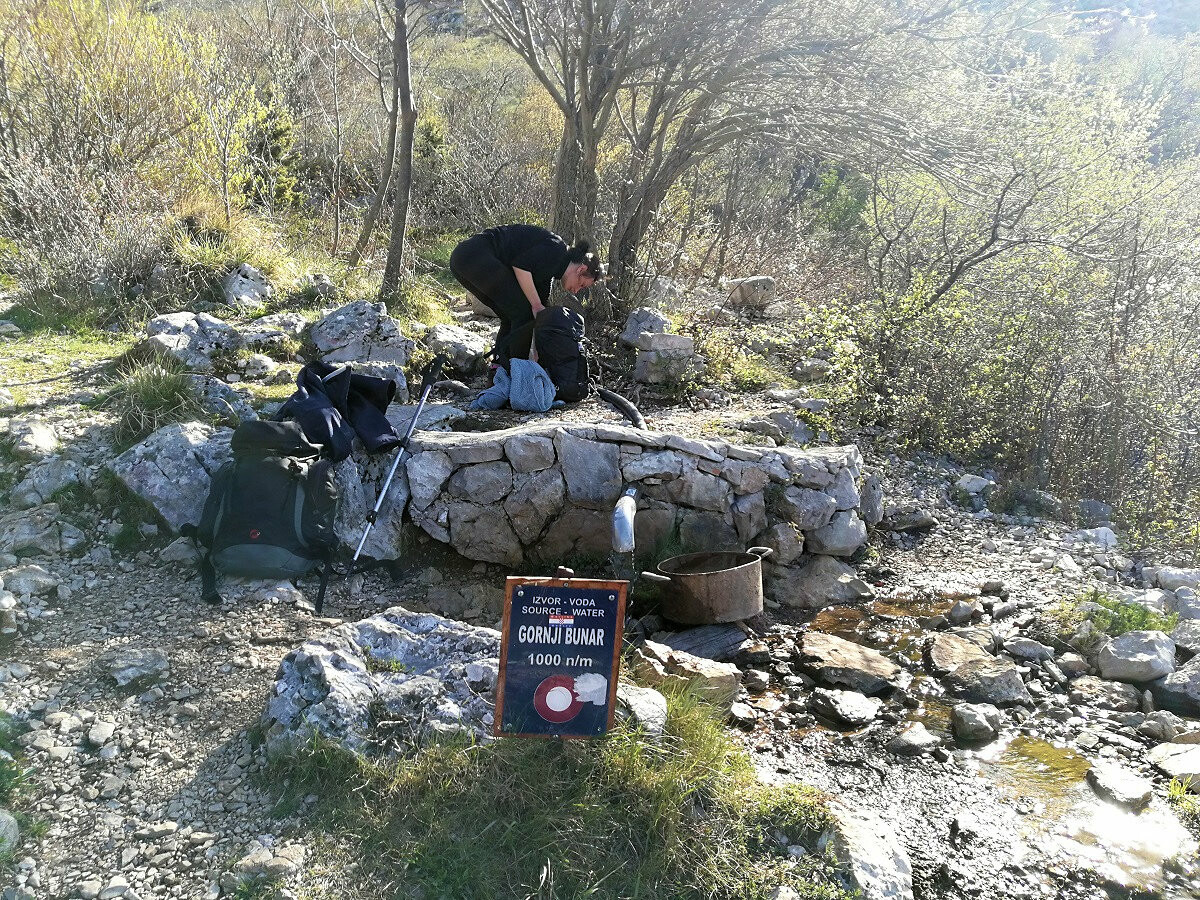 I will not lie to you. After the well, you can go left or right. We went left (like duh, you didn’t guess that after the jokes?!?) and the path led us uphill through the rocky serpentines. Okay, everything is quite uphill on Dinara. I would say that the hardest part of the journey is to get to the Ošljak peak. No trees anywhere to cover your sweaty body. Somewhere here, you can’t miss it if you just follow the markings, there is more water. I am not sure if you can drink it without filtering it, though. 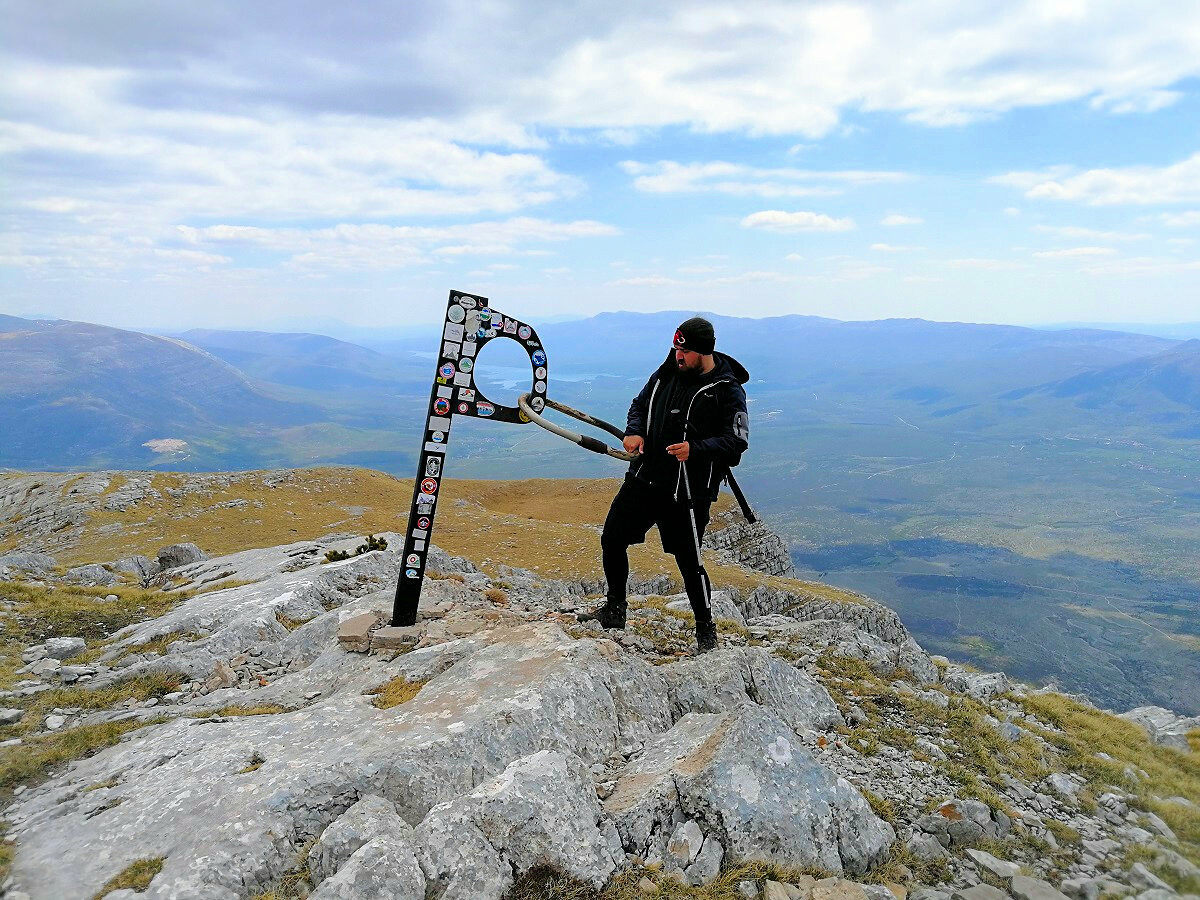 Ladies and gentlemen, we are at the final push with only approximately three km to Sinjal which is, with its 1831 meters, the highest peak in Croatia. How did we feel? Well, I think we just wanted to get over it. Luckily, I was in training for the race we had a couple of weeks ago so I was not worried about my performance. On Dinara, many times during the ascend you got the feeling you are close but then one more, bigger hill appears. You can see Sinjal around 45 minutes before you finally reach it. It is a bastard, I tell you.

Just one important thing before you get too comfy — now you need to make the descent! Don’t forget that. We went the same way and it took us three hours to return to Glavaš and take off our hiking boots. It got real hot when we were returning. Your feet will burn and your knees will be sore. It is highly recommended that you use hiking poles/staff. Was it worth it? I still feel the bliss.

We breathe and dance with the wind. We walk the hills and green mountains. Our true home is on four wheels. We aim to share our adventures and inspire you to embark on your own. Thanks to decades of fruitful living, in our minds, we are still young and ready to cooperate with the body’s needs and heart’s desires. Thanks to wisdom and success in creating affluence, we can afford to live our dreams. This articles are the record of our commitment to exploring the world and our abilities.