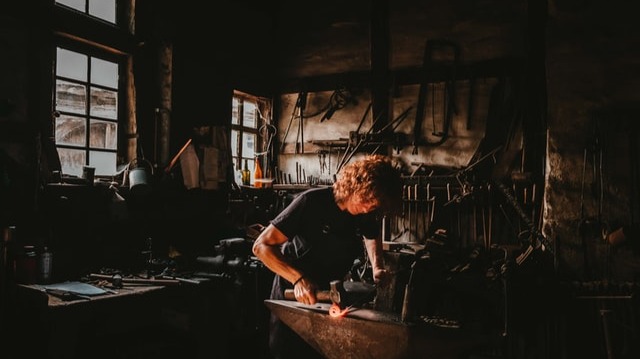 How to Reach the Level of Effortlessness in Any Skill

Ding! Sparks scattered on the concrete floor. Some of them landed on the shoes of a young apprentice closely watching the blacksmith do his job.

Ding! Echo hit the selling of a blacksmith shop and was lost among the piles of rusty metal pieces.

The young apprentice was studying every move of an old blacksmith as he chucks the iron he was striking into the furnace. It wasn’t only the heat that made Jack’s cheeks red. He was anxious about the fact that he will be asked to do metalwork on his own.

Throughout a week Jack couldn’t explain, what made every movement of the old man so fluent and accurate. The old man was a master of his craft doing it for many years.

“Now it’s your turn, Jack!” informed the blacksmith pointing his nose at the piece of metal he held with a huge glove. The other end of the metal was in the red-hot glimmering fire.

Jack took a few quick steps and took over. After a minute or so, he took the piece and carefully transported it on the anvil. While his heart pounded from excitement as well as stress.

The hammer felt uncomfortable and heavy in Jack’s arm. However, he struck the piece using much of his strength. After raising the hammer he looked at the impact the hit made.

It was a failure. Jack thought that the metal was much harder but the heating it up made it very moldable. The hit made it too flat and brittle.

“Perfection will come with practice,” said the old blacksmith expecting the exact outcome he witnessed.

The practice equals trying and simultaneously adjusting the action to make it better. Sometimes success appears, sometimes not. During the practice, there’s no pressure to reach perfection. It’s only the way toward it.

If we wouldn’t repeat the action we wouldn’t have a chance to improve it. If we don’t improve, we get what we get.

People that stick and do something over and over again master that activity.

Growing up I was a very shy kid. I never enjoyed the attention. However, I was attending a music school where at least every six months I had to perform piano pieces in front of dozens of people.

It was frightening! However, I found a trick that helped me through.

Before the concert, I was practicing only one song. The one that had to be performed in front of many people. I played it over and over again until my finger muscles knew exactly what to do.

No pressure was capable of ruining my performance. I was playing it almost automatically. I didn’t need to think about it.

When I say “automatic”, I don’t mean a complete auto-pilot where no effort is needed. In this sense, I mean that the effort is minimal.

We use our cutlery in an automatic way. When was the last time you had to think:

No, when we eat we use minimal effort. We’ve practiced eating for years and all of us became masters at it. You had to use much effort if you use your non-dominant hand.

You might be reading this with a cup of coffee in your hand. Congrats, you’ve become a master at coffee drinking if you can read at the same time without spilling or missing your lips.

Mastery comes through repetition and usually, perfection looks like automation where the least amount of effort is needed.

There isn’t only physical action automation but also mental. When you read books on topics you’re familiar with:

How do we develop the ability of automation? We are not machines. Although Artificial Intelligence uses similar principles only quicker.

Again, the answer is repetition.

Three months flew by in the old blacksmith’s facilities. Jack did many little tasks dozens of times. Without noticing many of his actions fell into a habit and became flawless.

Seeing another young apprentice leave the place, the old blacksmith was smiling.

You can only become good at something by doing it over and over again.

This blog is about mindsets, tips and patterns to help you to step up in life.